I just read a very interesting perspective on the Trade War on Seeking Alpha by Lok Sang Ho titled America Cannot Win The Trade War. While I understand his perspective, I could not disagree more. I will explain exactly why America can and will win the Trade War.

The thrust of Lok Sang Ho's argument is two-fold. First, the Chinese Economy is so big and so important to multi-national companies that they cannot afford to leave the Chinese market. He cites for example that "in its Annual Report last year, General Motors (NYSE:GM) reported having sold 4.04 million in China but only 3 million vehicles in America. And whereas America's home market is stagnant, China's market is still growing very fast." It is true that China's has the second largest economy in the world and that that economy has been growing faster than the U.S. economy. That does make the Chinese economy very important to multi-national companies and they will not abandon the Chinese market.

But Lok Sang Ho misses the point of the Trade War launched by President Trump. He is not expecting companies to abandon the Chinese market, or not manufacture some of their goods in China. There are two ways to lower the trade imbalance between China and the United States, either America buys less from China, or China buys more from the United States. President Trump wants China to start buying a lot more products made in America. And when this Trade War ends that is exactly what China will wind up doing.

The second point Lok Sang Ho makes on why he thinks China will win the Trade War is a political argument: "In all likelihood, Xi Jinping's rule will outlast Trump's. Party politics and rebellion within the Republican Party will end the folly of trying to turn the clock of globalization back." I am sure he is listening to the voices of President Trump's long list of detractors and from those benefiting from the current state of global trade. But he could not be more wrong.

There are winners and losers in the U.S. caused by the current trade imbalance with China. And the Europeans and Chinese believe that by targeting retaliatory tariffs designed to hurt Trump Voters the most that they can politically outlast President Trump and break his support. This is highly unlikely to occur.

According to the Gallup Organization, President Trump is more popular with the voters of his own party than any President has been since Gallup began polling weekly for Presidential Job Approval ratings (outside of short-term bumps by Acts of War such as the attack on September 11, 2001). Below is a look at Gallup's recent polling results for the President's popularity with Republicans:

Now take a look at Gallup's data for a President's Own Party Approval measured at Day 500 for all of the President's since Harry Truman: 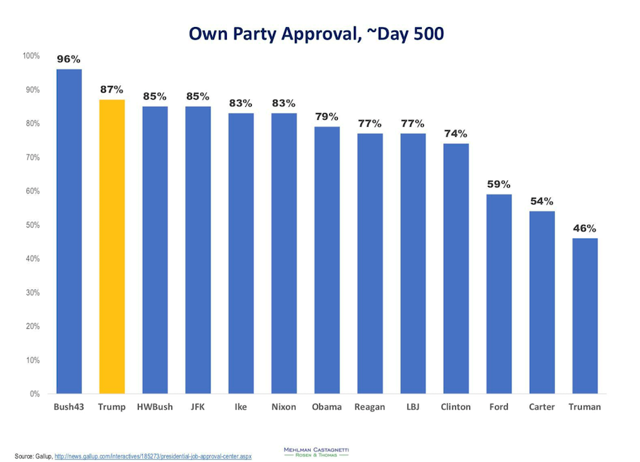 The point is President Trump has succeeded in convincing Republicans, and some Independents and Democrats, that these trade deficits are unfair to America and things need to change. There is no going back to the good old days for China and other countries when American leadership looked the other way and gave lip-service to the massive trade imbalances. In time, China and other countries will come to realize this.

Here is the one place where I agree with Lok Sang Ho who stated: " My prediction is that the US and China will get back to the negotiation table before long." I too expect them to return to serious negotiations. However, the terms of those negotiations are going to be very different than Mr. Sang Ho expects.