Over the past five years, the commodity market has garnered little positive attention relative to stocks and bonds. Quantitative easing failed to spur large inflation as many analysts predicted, and that "easy money" only increased financial asset inflation.

We believe the reason was simple, investor demographics raised demand for yield much more than it did for consumption. Fear over quantitative easing caused investors to rush into the commodity market, thereby creating a large real asset speculative bubble that lasted until mid-2011.

We don't believe the speculators were wrong, they were just too early.

Take a look at a "60/40" 60% long-term bonds (TLT) and 40% S&P 500 (SPY) compared to Silver (SLV) over various phases of quantitative easing. We realize this is "old news" for most macro and precious metals investors, but it gives us great context into the macroeconomic backdrop we are currently in. 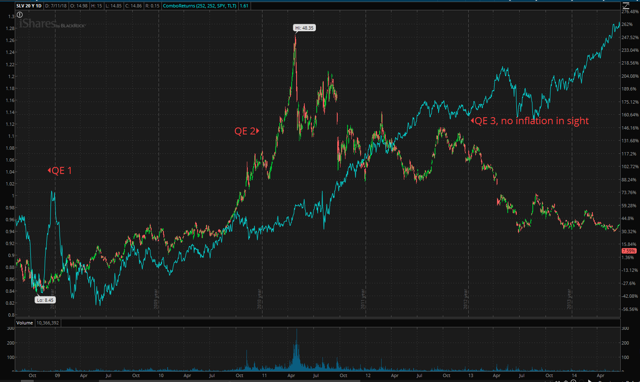 As you can see, each phase of quantitative easing did not materialize into any meaningful inflation. Likely, the inflationary spike in 2011 was simply due to normal post-recession price recovery, not helicopter money entering the consumer market. That said, it caused many to believe we were on the short road to extremely high inflation. As we explain further, we believe the fears held during the massive 2009-2011 precious metal bull market were not false, just ten years (give or take a few) too early.

Baby boomers are the largest demographic next to millennials and the wealthiest demographic (in aggregate) in the United States. In 1980, the average baby boomer was 25 years old. 25-year-olds (back then at least) were not interested in buying high-yield investments, they wanted homes, cars, television sets, and food for their young families. With too little production available to meet their needs, inflation boomed.

In 2009, the exact opposite was true. Boomers averaged 55 years old. As you all likely know, 55-year-olds are typically past their high consumption family-raising years and in their peak retirement savings period. Millennials, on the other hand, (which are the largest demographic) averaged only 20 years old. They were either in low-consuming high-school and college years or struggling to find gainful employment. Together these demographic trends put a large dampener on consumption-driven (i.e., real) inflation from the post-recession years to now.

In 2009, Boomers had just witnessed the largest stock market and home price decline in their lifetime. Thus, they were (and are) much more interested in "safe income" investments; and so, they poured their money from the stock and real estate market into the bond market.

The goal of quantitative easing was to push money into the real economy via the banking sector. As the economic theory goes, you buy bonds and increase investor wealth so they will be more likely to go out and buy a new car and television set. Of course, buying bonds also lowers interest rates and increases the supply of credit available for this sort of consumption. As consumers began to outstrip productive capacity via increased consumer spending, inflation should accelerate.

Little did the Federal Reserve understand, nobody who got that money wanted a new car or a new television set. They wanted to retire safely, first by purchasing bonds when yields fell low enough that boomers realized they wouldn't save enough, by buying stocks and junk-rated bonds.

We would argue that the recent rally has little to do with our "skyrocketing" 2-3% GDP growth (very low by historical standards) and much more to do with the simple fact that the average boomer was 61 in 2016. When you're 61, have about 50% of what you'll need to retire and are faced with a "risk-free" treasury return of 2.5% (which is a negative real "post inflation" return) you're faced with few options. You can downsize drastically, or take to the age-old game of stock-market speculation.

Pensions are one of the largest investment vehicles for boomers in the United States. By examining the financial decisions of large pensions we can extrapolate into the decisions of the retirement investors in a similar demographic to those in the pension.

We will use one of the largest pensions in the United States, the California Public Employees' Retirement System "CalPERS." The system currently holds about $326 billion in assets and, according to CalPERS, is on track to pay out 68% of its promised amount to the California employees on its system. Of course, that's given it can garner a return of over 7.5% annually over the next two decades. If it fails to reach that amount or suffer another investment failure, that figure will likely drop to below 40%.

As with the majority of boomers, the CalPERS investment allocation has become increasingly risky and speculative. Put simply, a 2.8% risk-free treasury yield won't give you a 7.5% return.

The fund's current asset allocation is as follows:

According to its current policy, its fixed income holdings are only 40% "risk-free" treasuries with the other 60% diversified between primarily mortgage-backed securities (home prices are back at all-time highs) and corporate bonds (which nationally are at record low credit ratings).

In other words, over 82% of its current allocation will be greatly impacted by an economic slowdown. Yes, this has allowed the pension to post excellent 15% returns last year, but it is only doing it by dangerous speculation at an attempt to reaching a slightly higher funding ratio. Global equity markets look shaky, we're in the second-longest bull market, the yield curve is almost flat, now is not the time to speculate on more growth.

Financial Assets Poised for Little to No Returns

Despite record allocation on behalf of boomers and pension plans, future returns in financial assets (stocks and bonds) should be zero-to-none. This is not to say we are immediately headed for a bear market, it is only to say that financial assets should have limited performance over the next ten years.

Below is the CAPE Shiller Price to Earnings ratio over its history. The CAPE ratio uses a 10-year running average earnings figure to discount future economic downturns. We believe this is the best figure for understanding future potential market returns.

As you can see, the U.S stock market is valued more highly than it was before the great depression and is only second to the tech-bubble in the 90s. We won't speculate on precise returns, but it is important to understand that 10-year annualized market returns at this valuation level are historically sub-3%.

The situation appears to be even more worrisome in the bond market. To understand this we created a mock-portfolio of 1/3 allocated to each 2-year T-bonds (SHY), 10-year T-bonds (IEF), and 20-year T-Bonds (TLT).

Here is that portfolio's performance since 1978. 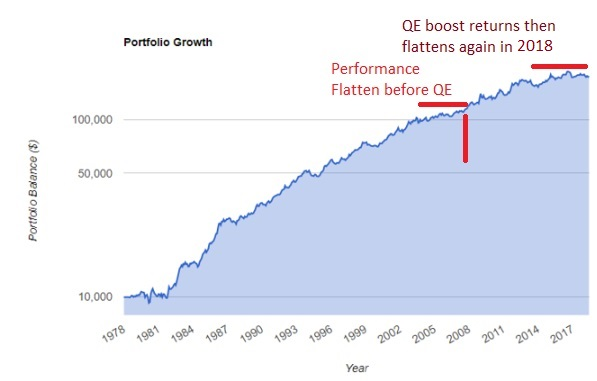 As you can see on the logarithmic chart above, bond performance remained stagnant or negative during the end of stagflation in the late 70s and early 80s before skyrocketing until 2008. As we marked above, the 2008 quantitative easing post-2008 prolonged the bull market before performance turned negative. In 2018, in the face of a tightening Fed balance sheet and rising rates, performance is falling into decline. Instead of stopping the decline in "risk-free" bonds, they only delayed it until now.

Here is what we know will happen over the next decade with our two demographic masses:

In economic terms, interest rates and inflation should rise back to (or above) 1980s levels and monetary authorities can do very little to stop it.

If investors want to retain their wealth in this situation, they need to do the opposite of what they've been taught to do for the past 35 years. As shown in the bond chart above, an investor would be rise to limit their exposure to rising rates; this means little to no exposure to commercial real estate, utilities, and bonds. Investors should also increase their exposure to assets that will gain from higher consumption and inflation like consumer discretionary/health (for the aging population), energy, and precious metals.

Here is the model portfolio we have created to characterize this: 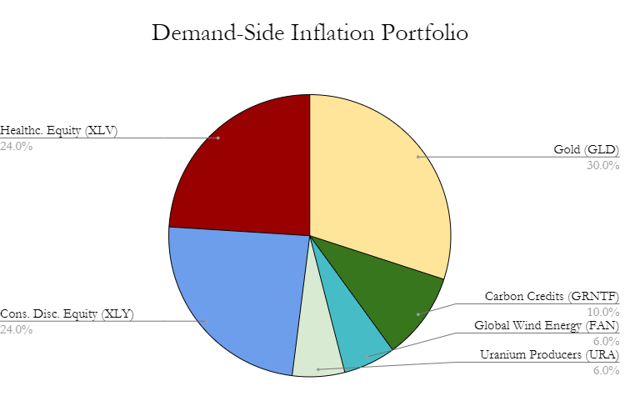 It's roughly 60% equity, 40% commodity. The equity portion is mostly consumer discretionary (XLY), and healthcare (XLV) with other portions going to alternative energy like wind energy (FAN) and uranium producers (URA). The commodity portion is primarily precious metals to gain from any dollar devaluation and inflation with a portion going to carbon credits (GRN) (the reason behind this is explained well here).

We will compare the portfolio to a traditional "60/40" portfolio as in the chart in the beginning of the article. Here is the exact allocation we are using: 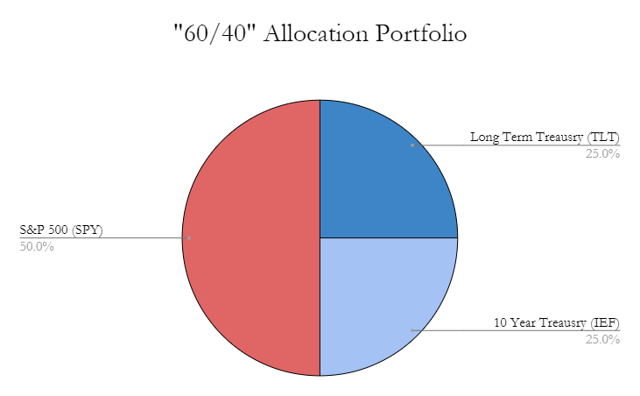 And here is the 5-year performance of these two portfolios: 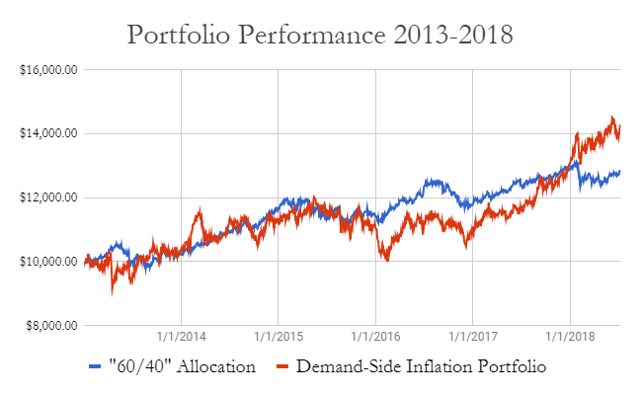 This chart itself gives us limited information. We like to use a metric we call the "performance ratio." It's simple; it's the ratio of the performance of two assets or portfolios. When it rises, it means the portfolio in question outperformed the other. When it falls, it means the portfolio underperformed. We find that it is a great way to measure to understand the underlying economic variables at play.

In this case, we're going to place the chart above the 10-Year Breakeven Inflation Rate, a standard market measurement of yearly inflation expectations over the next ten years. 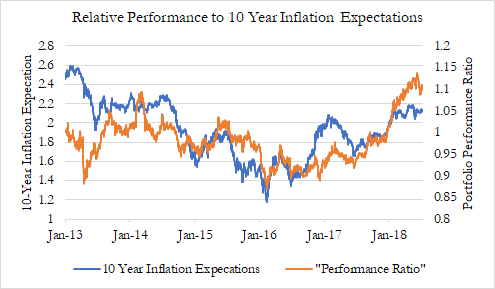 Since the 1980s we have been under an economic regime that does not favor our portfolio. Inflation and interest rates have been in a long and slow decline all the way down to at or near the zero bound. When there is a recession that should create financial wealth destruction, the Federal Reserve lowers the interest rate and increases the money supply. Due to demographic trends, each successive increase to the money supply primarily boosts financial inflation at the expense of real inflation. Of course, asset inflation makes the wealthy wealthier and, because it fails to trickle down to those who consume the most, does little to boost real economic growth.

With all that wealth locked up primarily among baby boomers and older, we expect this trend to end with a halt in coming years as pensions and IRAs begin to be withdrawn in a mass. Not only will they be selling their investments those investment themselves will yield ever-lower returns.

As money flows down the demographic chain, we expect inflation and real asset values to appreciate greatly as the economy "resets." This may spur large trouble for retirees and those holding assets with inflationary risk, but, as with any financial trouble, it will create great opportunities to those who are positioned correctly.

Harrison Schwartz
12.31K Followers
Harrison is a financial analyst who has been writing on Seeking Alpha since 2018 and has closely followed the market for over a decade. He has professional experience in the private equity, real estate, and economic research industry. Harrison also has an academic background in financial econometrics, economic forecasting, and global monetary economics. His promise to readers is that he will tell the truth as best he can see it, with no sugar coating and no hype - even if his view disagrees with the popular narrative (which it usually does these days).
Follow

Disclosure: I am/we are long GLD, URA. I wrote this article myself, and it expresses my own opinions. I am not receiving compensation for it (other than from Seeking Alpha). I have no business relationship with any company whose stock is mentioned in this article.