Indicators at a Glance 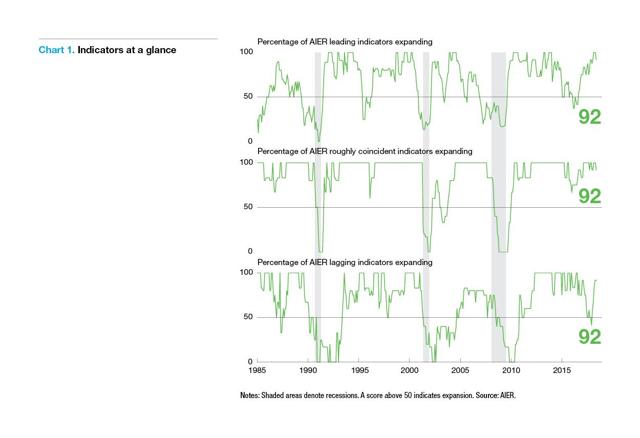 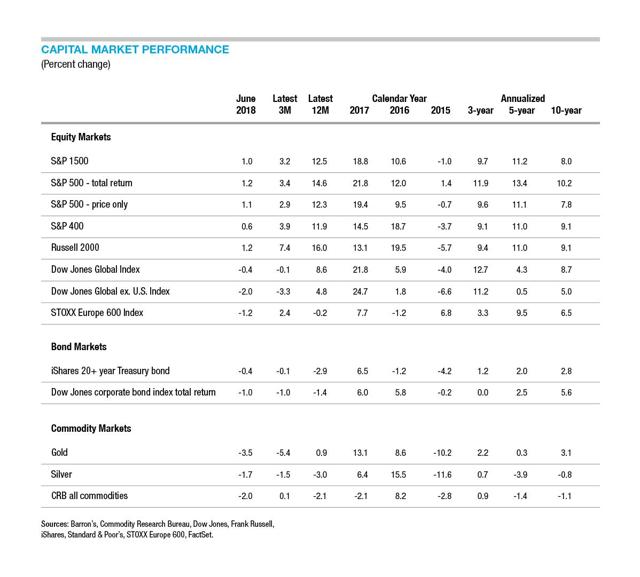 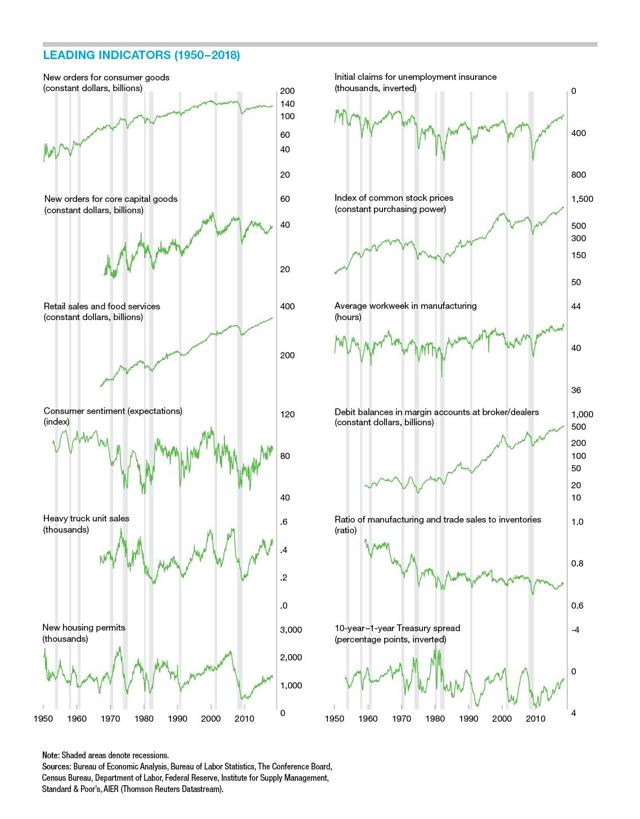 AIER's Leading and Coincident Indicators Fell in June but Remain Very Strong; Debt Levels are Growing but Do Not appear to be a Threat Yet

Economic activity remained robust over the past month, providing further evidence that real GDP growth likely reaccelerated after a weak first quarter. Consumer price increases accelerated a bit further in May. However, ongoing trade disputes, including escalating tariffs, remain a major source of concern. In addition, with the prospect of interest rates continuing to drift higher, there are some concerns over debt levels in various sectors of the economy. However, only one sector raises a red flag: government.

AIER's Lagging Indicators index held at 92 in the latest month, its third month at that level. Overall, five indicators are trending higher, none are trending lower, and one is neutral. However, two indicators posted offsetting changes in the latest month. Real manufacturing and trade inventories moved from a positive trend to a neutral trend, while commercial and industrial loans improved from a neutral trend to a positive trend.

Economic activity is growing at a moderate pace

Retail sales are a key component of consumer spending and have shown somewhat stronger performance in recent months than overall real consumer spending. Retail sales jumped 0.8 percent in May, the third strong monthly gain in a row following weak performances in January and February. Over the past year, they are up 5.9 percent, the strongest yearly gain since November 2017 and the second-highest 12-month gain over the last six years.

Gains in retail sales in May were widespread among the components. Strong gains were posted by miscellaneous store retailers, building materials and building supplies stores, clothing stores, restaurants, and general merchandise stores. Online retailers and consumer staples, such as food stores and health and personal care stores, had modest growth in May. The only major components to show declines for the month are furniture and home furnishings stores, as well as sporting goods, hobby, music, and book stores.

Unit vehicle sales picked up in June - an early sign that retail sales overall may show another solid rise for the month. Unit sales came in at 17.5 million units at a seasonally adjusted annual rate, up from 16.9 million in May. For the second quarter, however, unit sales are 1.4 percent below the first quarter. Unit vehicle sales continue to be driven by light trucks (pickups and SUVs), which posted a 12.0 million unit annual rate, up from 11.5 million in May, while car sales have languished, selling at a 5.46 million rate versus 5.43 in May. Light trucks comprised a record 68.8 percent of total light vehicle sales in June.

On the labor front, the June jobs report was strong. Payrolls in the United States rose by 213,000 in June, solidly beating an expected gain of 195,000. The private sector added 202,000 jobs. Gains were widespread among the private sector industries in June.

The strong labor market conditions attracted a very substantial 601,000 more people into the labor force in June, pushing the labor force participation rate to 62.9 percent, up from 62.7 percent in the prior month. The unemployment rate also moved higher, rising 0.2 percentage points to 4.0 percent in June, after hitting a new low for the current cycle of 3.8 percent in May.

Average hourly earnings rose 0.2 percent in June, holding the 12-month change steady at 2.7 percent. The length of the average workweek also held steady at 34.5 hours. Combined, the gains in payrolls and hourly earnings along with steady hours worked resulted in a 0.4 percent increase in the aggregate payrolls index in June and a 12-month rise of 5.1 percent. This index is a proxy for take-home pay and has been growing in the 4-5 percent range for most of 2011 to mid-2018, providing a solid base to support consumer spending.

Consumer price increases accelerated in May

The consumer price index rose 0.2 percent in May, the fourth 0.2 percent increase in the past six months. From a year ago, the CPI is up 2.8 percent, the fastest pace since February 2012. The pace of rise in the CPI has been drifting higher since registering a 0.2 percent decline for the 12 months ended April 2015. However, much, though not all, of that acceleration has been due to energy prices, a famously volatile category.

A few key areas account for a major portion of the rise in core services prices. Shelter, particularly owners' equivalent rent, is a major driver of core services prices. OER accounts for 23.6 percent of the CPI and has risen 3.4 percent from a year ago, up from a 3.1 percent increase for the year ending in November 2017. This number is particularly noteworthy because it is a contrived number. It represents what home owners would pay to rent their homes to themselves. There is no actual transaction behind the number. It is estimated based on what actual renters are paying for their housing. A variety of housing services and household operations services, such as water, sewer, and trash collection as well as domestic services, gardening and lawn care, and repair services, together accounting for a total of about 2 percent of the CPI, are all showing 12-month price increases above 3 percent.

In sum, while consumer price increases in aggregate are accelerating, six areas - energy, restaurants, OER, housing operation services, hospitals, and vehicle insurance - totaling 44 percent of the CPI, account for most of the upward pressure.

Debt levels are rising across the economy

For both households and corporate business, the increases in debt appear moderate in the context of their overall balance sheets. For households, asset growth has exceeded debt growth, pushing net worth to a record $100.8 trillion. For nonfinancial corporate business, total net worth is also at a record high, reaching $23.7 trillion; the ratio of liabilities to assets is 46.3 percent, about where it was in 1990 and near the middle of the range over the past 30 years.

The most indebted sector is the federal government. Total debt outstanding was $21.2 trillion as of June 29, 2018, according to the Treasury. As of the end of the first quarter, the debt-to-GDP ratio stood at 105.7 percent. The latest Congressional Budget Office projections show debt held by the public (a subset of total federal government debt) exceeding 150 percent of GDP by 2048. Without significant changes to fiscal policies, the federal debt burden could precipitate the worst financial crisis in many generations.