An age-old dilemma for investors is whether they should concentrate on solid investments, which are likely to result in more consistent returns, or to seek out speculative investments, where some will shoot to the moon but most will fail. Today I'll provide some insight on why consistency has some major advantages over shooting for the moon.

One of the crucial concepts that all investors need to understand is the power of compounding. Few people truly understand it. Even those that think they do often miss some crucial details.

Compounding is all about making profits on your profits, by reinvesting your gains as you go along. It makes little difference at first. But, in the long run, even small differences to average annual returns can make a huge difference to the end result.

I've written about compounding in the past, and some of the key implications for any investor. Whether you're new to compounding, or if you'd like a refresher (which is highly recommended from time to time), below are some links to relevant articles:

Today I'm going to look at another aspect of compounding which is rarely understood. I'll explain why it's better to have returns spread fairly evenly across a portfolio of investments than it is to have them heavily skewed towards a small subset of the portfolio.

I was reminded of this when recently reading a quarterly letter from a fund of hedge funds. That's an outfit that aims to invest in a group of the best hedge funds it can find. For the privilege, it adds an additional layer of fees to the already high fees of the underlying funds.

The manager argued that, if he split the capital across 10 underlying funds at the start, and if one made 20% a year and the others made precisely zero (with no rebalancing) then investors would still end up making an average 11% a year after 30 years.

The conclusion was that just one exceptional underlying investment, combined with a sufficiently long time line, can still result in great returns in the end. But there are actually some major flaws in this thesis.

You may assume that I'm going to focus on the inevitable lack of diversification that such a portfolio would have after many years. That's certainly an important factor, but I'll come on to other issues, which are just as significant in my view.

However, let's quickly get the diversification issue out of the way. From a starting position of 10% of the portfolio, the high-performing investment would reach 41% after 10 years, 81% after 20 years and 96% after 30 years. Since absolutely any investment can go wrong, it would involve taking a spectacular risk to have such huge concentration, whatever the level of conviction.

But, there are actually some other factors that are just as important as potential lack of diversification in such a skewed portfolio. Arguably, they're even more important.

One way to invest is to try to guess which company will be the next Amazon (AMZN), or Google (GOOG) (GOOGL), or Netflix (NFLX) or any other of the big, booming tech stories of the past couple of decades. The problem is that, for every great success in hot new areas, there are likely to be dozens of companies that don't achieve much, or even simply fizzle away into bankruptcy. (Is anyone still doing internet searches on AltaVista or Webcrawler, a couple of the early leaders?)

Even the very best investors in the hottest new tech have relatively low success rates. That includes people such as Silicon Valley venture capitalists. Private investors are even less likely to get it right, although some of them will do well (either by luck or judgement).

The net result of that kind of speculative investing, at best, is likely to be a large number of losers and a very small number of investments that go to the moon. It could still average out okay in the very long run, although I'll say more on the timing below. However, the positive results will be heavily skewed to just a small piece of the portfolio.

The other way to go is to aim to have a portfolio where the returns are more evenly spread out. This won't have the spectacular individual gains of any moonshot positions (i.e. stuff to brag about at cocktail parties). But neither will it have the large volume of ultra-low return or catastrophic positions (i.e. stuff to cry into your whisky over).

Two approaches: skewed and even. I want to explain the distinct advantages of the more even approach.

Every portfolio is different, so it's important to simplify when attempting to shine light on underlying investment concepts. That's the approach I'll take today, as I've done often in the past.

Let's imagine two simple portfolios, the "Skewed Portfolio" and the "Even Portfolio". Both consist of 10 individual stocks and both start with a value of $100,000, meaning each investment is $10,000 to begin with. There's no rebalancing, so positions develop over time according to their own returns.

The Skewed Portfolio has one single stock that returns 20% a year. The remaining nine stocks return 0% a year.

After 30 years, $100,000 would turn into a little under $2.5 million, with 96% of that in the single high-return stock and only 4% in the other nine stocks. The 30-year compound annual return is equivalent to making 11.3% a year, on average, across the whole Skewed Portfolio.

Now let's look at the Even Portfolio. The difference here is that all 10 stocks return 11.3% a year. This means that, after 30 years, the Even Portfolio will have grown to exactly the same amount as the Skewed Portfolio, being just under $2.5 million.

So far, so good. We have two simple portfolios, each with very different return distributions. One shoots for the moon, but only hits it one time out of ten. One has consistent and solid returns across all positions. But both have the same result after 30 years.

On that basis, both portfolios are equivalent, right? The investors that chase speculative moon shots, even if they only find them once in a while, and the investors that seek consistently solid returns could do just as well over time.

Not so fast. There are some important devils in the detail.

The first is that the Skewed Portfolio starts off with a very low annual return of just 2%. That's because the single high-return stock is a small part (one tenth) of the overall pie at the outset. Over time the portfolio return increases, as the high-return stock takes up a bigger and bigger share. Eventually, it overtakes the Even Portfolio's 11.3% a year and trends closer and closer to 20% a year. How the annual rates of return develop is shown in the following chart. 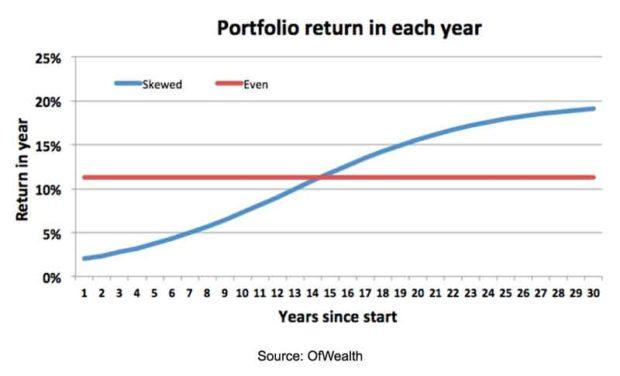 This means the more speculative Skewed Portfolio is slow to see results. Yet people engaged in speculative investing are even less likely to have the patience for results than others. This additional, self-imposed pressure could increase the chances of making rash decisions. 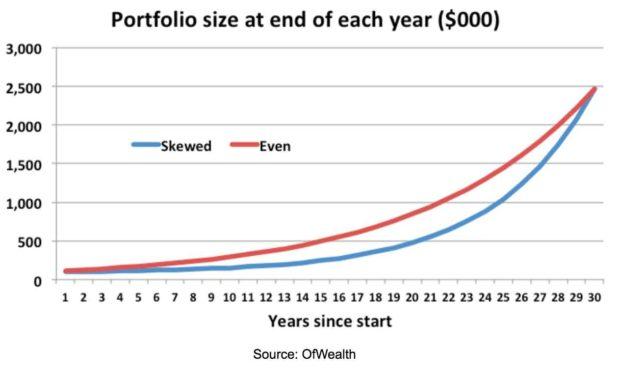 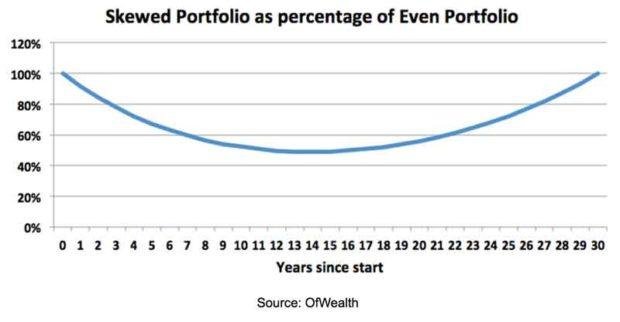 The lowest point in the above chart is at the end of 14 years. At that point, the Skewed Portfolio is worth just 49% - or less than half - of the Even Portfolio. That's a huge difference. It also illustrates the massive patience that could be required before successful speculations make up for unsuccessful ones.

On top of that, many people may need money earlier than previously expected, due to some unforeseen circumstance. So this is another reason why the steadier, Even Portfolio provides more certainty and reassurance along the investment journey.

Speculative, moonshot stocks can work out sometimes. If you've been lucky enough to have one or more then great. But basing your whole investment strategy around them has some major drawbacks. These are:

Obviously, I've used simplified examples to illustrate the issues, and the real world is more complex. But I hope I've shown good reasons why the core of any investment strategy - especially a stock portfolio - should be built around a core of solid investments, each of which has a high chance of resulting in a solid return.

That's the approach I take… plus patience. I can assure you that it works.

Disclosure: OfWealth expressly prohibits its writers from having a financial interest in any individual securities they recommend to their readers, other than collective investments such as exchange traded funds.

Rob Marstrand
3.31K Followers
I’m Rob Marstrand, the founder of OfWealth. I publish investment newsletters for private investors, always written in clear, non-technical language. I spent 15 years at UBS Group, the global investment bank, based in London, Zurich and Hong Kong. Then, for five years, I was Chief Investment Strategist at the US-based Bonner & Partners Family Office. Now I live in Buenos Aires, Argentina. Given its chaotic history, Argentina is the perfect place to learn how to survive and thrive in times of crisis.
Follow
6 Comments
To ensure this doesn’t happen in the future, please enable Javascript and cookies in your browser.
Is this happening to you frequently? Please report it on our feedback forum.
If you have an ad-blocker enabled you may be blocked from proceeding. Please disable your ad-blocker and refresh.