England sadly came off second best against Croatia in the World Cup semi-final.

The England national team’s unexpected success at the 2018 World Cup is likely to provide a significant boost to the bottom line of some firms.

With World Cup fever gripping the nation over the past few weeks, millions of fans have spent heavily on items such as new TVs and sportswear, as well as on.

Here is a look at three UK companies that could profit from England’s success at this year’s World Cup.

With millions of people flocking to the nation’s pubs to support England during the tournament, pub operator Greene King (LON: GNK) looks set to benefit. According to data from Barclaycard, total pub expenditure increased by 9.5% in June, compared to June 2017.

During England’s match against Panama, Greene King sold an extra half a million pints, and the team’s progress past the group stage of the tournament is likely to provide a significant boost to the company’s bottom line.

Greene King shares have fallen heavily over the last two-and-a-half years, as profitability has been impacted negatively by higher wage bills, higher taxes and the cold weather earlier this year. For the year ended 29 April 2018, adjusted earnings per share fell 11%.

However, looking ahead, the outlook for Greene King looks more promising as England’s success at the World Cup, along with the recent heatwave, could provide the company with a material boost to sales for the year. The shares currently trade on a low P/E ratio of just 9, so could potentially offer upside from here.

With England’s success at the World Cup capturing the imagination of millions of people, demand for England replica kits and other sportswear is likely to have been strong during the tournament and could potentially remain elevated in the near term. One company that looks set to benefit here is Sports Direct (LON: SPD), which operates over 750 sports stores across the UK and internationally.

It’s worth noting that during the 2010 World Cup, when England faced the USA in the group stage of the tournament, Sports Direct posted its strongest trading day on record, as consumers rushed to buy football-related sportswear. This year’s World Cup, in which England has progressed further than in 2010, could therefore also provide a sizeable boost to sales.

Sports Direct shares aren't without their risks, and with the unpredictable Mike Ashley at the helm, the company is never too far away from controversy. Debt has also increased recently, as the company has invested for future growth. Yet, with sales likely to receive a boost from England’s World Cup success, and the company aiming to become the “Selfridges of sport” in the future, now could be a good time to take a closer look at the shares.

Lastly, broadcaster ITV (LON: ITV) could also receive a boost from the World Cup. ITV is one of the two channels that has been screening the World Cup in the UK, and is set to benefit from colossal viewer numbers, and higher advertising revenues, as a result of the tournament.

Last week, 24.4 million viewers tuned into ITV to watch England’s penalty shootout against Colombia, with a further 3.3 million people watching the game on the ITV hub. And last night’s semi-final against Croatia is likely to have generated more big viewer numbers, enabling the FTSE 100 company to charge vast sums for advertising slots.

ITV shares have been sold down heavily over the last two years on concerns over the UK economy and the weak advertising market. These issues certainly add risk to the investment case. However, with the group set to benefit from the World Cup, as well as the success of other shows such as Love Island, the outlook may not be as poor as many believe. Trading on a low P/E ratio of just 11.1, the stock could offer appeal from a contrarian perspective. 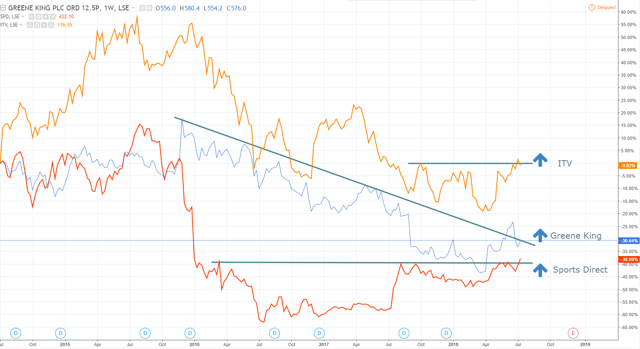 We would expect the boost to the shares from the World Cup to be short-lived in and around the release of the next half-year and quarterly sales updates. However, we have picked these shares as oversold value opportunities (see chart above) and feel the World Cup could be the catalyst to turnaround a longer-term period of under performance.

Additional disclosure: The information and comments provided herein under no circumstances are to be considered an offer or solicitation to invest and nothing herein should be construed as investment advice. The information provided is believed to be accurate at the date the information is produced. Losses can exceed deposits.

Follow Jasper Lawler and get email alerts
+
Add a comment
Disagree with this article? Submit your own.
To report a factual error in this article, click here.
Your feedback matters to us!