Midstream had a decent week, highlighted by the MLP Index outperforming U.S. and Canadian midstream corporations and breaking back into positive total return territory year to date. MLPs traded up despite weakness in commodity prices and in utilities. On Monday, in particular, MLP action was encouraging when the UTY was drubbed for a 3% loss and the MLP Index was positive. 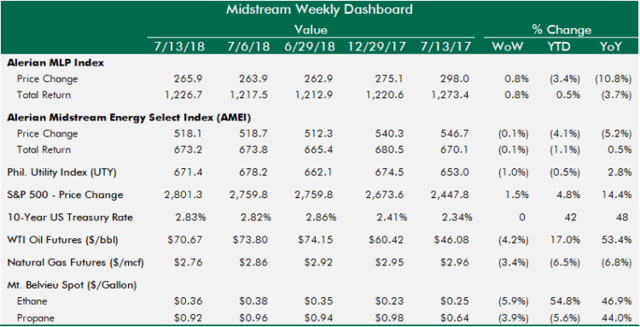 With midstream earnings kicking off this week, some of the action may have been shifting positioning (corps to MLPs), short-covering in advance of company reporting season, mixed with legit new fund flows on a fresh quarter and building interest in the space. On both Thursday and Friday, it was noticeable that major underperformers (i.e. successful shorts) outperformed other midstream and MLP stocks.

The setup into earnings is cautious optimism with a few weeks of lower volatility and slight gains. With another solid reporting season, the recent treading water could shift to a breakout, assuming relative calm in global trade war chatter and steady commodity prices. For now, we're still waiting on the fireworks.

TLP joined the growing list of zombie MLPs with a buyout offer from sponsor ArcLight at a healthy (by MLP standards) premium, and traded up as a result. Noticeable positive performance by the two remaining FERC-impacted pure gas pipeline MLPs (SEP, WPZ are being bought out) and two other big underperformers BPL and EQM. Short-covering ahead of earnings might explain it, but there is likely some bottom fishing and seekers of value starting to get involved.

The bottom 5 included 3 shipping MLPs, probably down with oil prices. ENLK continues to sputter following its GP switch, down 4.6% this week. 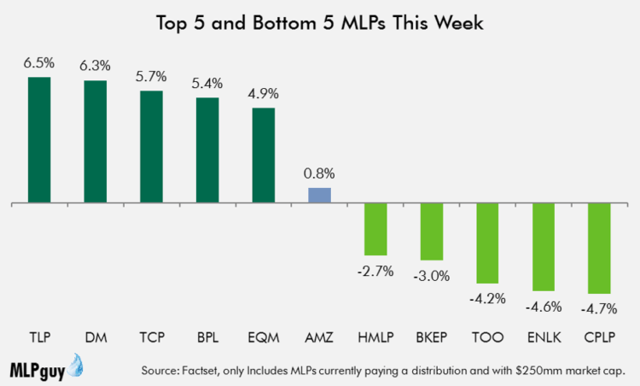 TLP has been in this position before: almost 3 years ago to the day, NGL Energy (NGL) (TLP's sponsor at the time) offered to buy out TLP units in a 1:1 unit exchange when NGL traded at $43.55/unit. As noted earlier this week on Twitter, given how NGL's stock has performed since, TLP's board should be applauded for holding out back then. Most MLPs would be happy to get valued at anywhere close to their 2014 prices, but TLP has held up remarkable well in the downturn.

This week, the market bid-up TLP beyond the $38/unit takeout price offered this go around, on the expectation that TLP may again drive a hard bargain or attract another bidder. While a very old MLP, TLP is not a large or significant MLP, with a small float and smaller daily trading volume. But it does continue the almost-weekly trend of MLPs disappearing.

BPL was the worst performer last week and rebounded, BKEP was in the bottom 5 in both weeks. On the YTD leaderboard, DCP popped into the top 5 this week, making it 3 gathering & processing MLPs in the top 5. 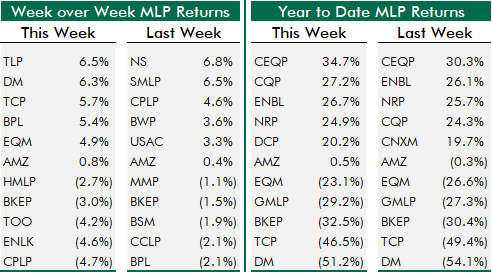 GPs and midstream corporations as a group underperformed MLPs this week. The recent trade to buy corporations and sell MLPs reversed a bit. EQGP rallied with its subsidiary's rally this week, leading the group. TRGP rallied despite weaker commodity prices in perhaps another example of short covering. LNG was the worst performer in the group on negative sentiment around trade and lower commodity prices. 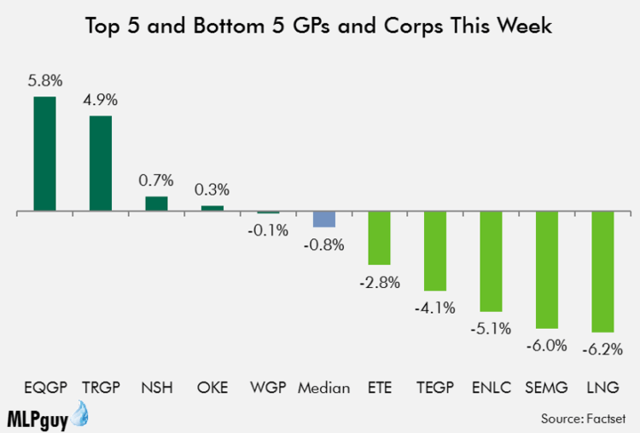 OKE stands alone at the top of the YTD leaderboard, but second place is tighter after LNG's weakness and TRGP's strength. 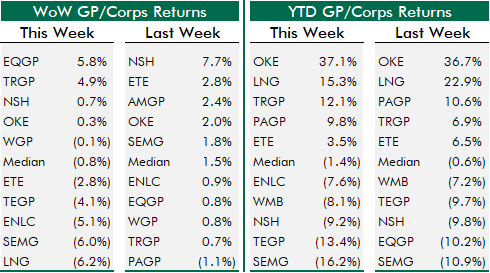 No news in Canada and almost no range of performance within the group, just a tight 200 basis points separated the top and bottom performers. Canadian midstream underperformed MLPs, but bested GPs and U.S. corporations this week. 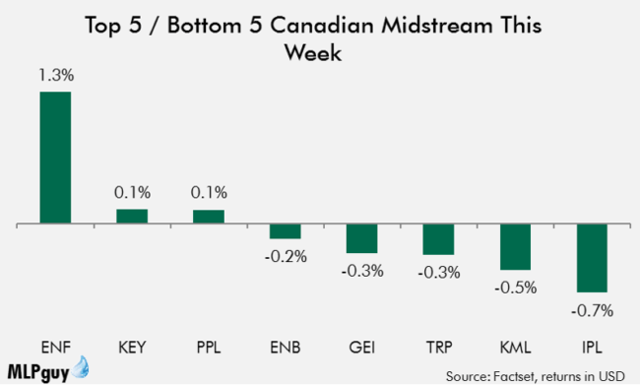 News of the Midstream World

Quiet week of news ahead of earnings season. Many scheduling filings setting up quarterly earnings dates. Next week, we'll get distribution announcements en masse, KMI earnings and hopefully some strategic announcements we've been waiting for. Announced deals are nearing completion: NS/NSH vote is 7/20 (next Friday), BWP is gone after 7/18, and WMB/WPZ announced 8/9 merger vote date.