Value investing is not just about buying stocks with a low price to earnings ratio, that’s a too simplistic and ultimately myopic approach. The true essence of value investing is buying a company for a market price below the intrinsic value of the business. Growth is one of the variables you need to consider when estimating that intrinsic value. This means that a stock with a comparatively high price to earnings ratio can be undervalued if earnings are expected to grow rapidly enough.

Warren Buffett is clearly one of the world’s leading experts in value investing, and he believes that investors should not consider growth and value like two opposite approaches. Far from that, according to Buffett growth and value are two sides of the same coin. In his Berkshire Hathaway (BRK.A) (BRK.B) shareholders in 1992, Buffett wrote:

“Most analysts feel they must choose between two approaches customarily thought to be in opposition: "value" and "growth." Indeed, many investment professionals see any mixing of the two terms as a form of intellectual cross-dressing.

We view that as fuzzy thinking (in which, it must be confessed, I myself engaged some years ago). In our opinion, the two approaches are joined at the hip: Growth is always a component in the calculation of value, constituting a variable whose importance can range from negligible to enormous and whose impact can be negative as well as positive.”

The price to earnings growth (NYSE:PEG) ratio can be an enormously valuable tool when it comes to incorporating growth into the valuation equation. The PEG ratio is obtained by dividing the classic price to earnings ratio (P/E) by the expected growth rate in earnings.

The PEG ratio was popularized by Peter Lynch, and the renowned asset manager considers that companies with PEG ratio below 1 tend to be attractively valued. From Peter Lynch’s book, One Up On Wall Street:

"The P/E ratio of any company that's fairly priced will equal its growth rate ... If the P/E of Coca-Cola is 15, you'd expect the company to be growing at about 15 percent a year. But if the P/E ratio is less than the growth rate, you may have found yourself a bargain”

The main point is that growth can be a key determinant of a company’s value, and this makes the PEG ratio a much stronger valuation metric than the classical P/E ratio alone, especially when it comes to companies with high potential for growth.

Value And Growth By The Numbers

The quantitative system excludes over the counter stocks from the investable universe to guarantee a minimum size and liquidity level. Then it considers only companies with a PEG ratio below 1 based on the average long term earnings growth expectations for the business.

Among the companies with a PEG ratio below 1, the quantitative system will pick the 50 stocks with the highest financial quality. This is calculated through a ranking system that includes six different metrics: return on investment (NYSE:ROI), return on assets (ROA), return on equity (ROE), gross profit margin, operating margin, and free cash flow margin.

There is a clear and direct relationship between business profitability and shareholder returns. If all other variables are the same, the more profitable the business, the higher its ability to create value for investors over time. Once you have a list of companies that are attractively valued in terms of the PEG ratio, it makes sense to pick the most profitable companies from such universe to build a portfolio.

The quantitative system has produced solid backtested performance over the long term. The chart below shows how the 50 stocks selected by the system performed in comparison to the SPDR S&P 500 (SPY) ETF since 1999. The backtesting assumes an equal-weighted portfolio, monthly rebalanced, and with an annual expense ratio of 1% to account for trading expenses. 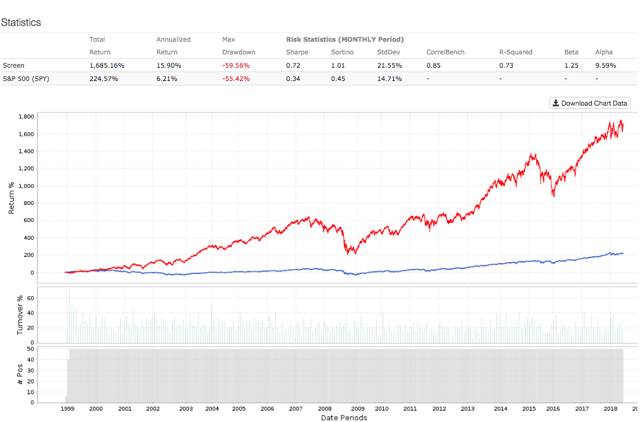 Data from S&P Global via Portfolio123

The system more than doubled the benchmark, with annual returns of 15.9% per year versus an annual return of 6.21% for the market-tracking ETF in the same period. In other words, a $100,000 investment in the SPDR S&P 500 ETF in January of 1999 would currently be worth around $324,600, and the same amount of capital allocated to the portfolio recommended by the system would have a much larger value of $1.78 million.

System Alpha during the backtest period was an impressive 9.59%, and the system materially outperformed the benchmark on a risk-adjusted basis, as shown by indicators such as Sharpe Ratio and Sortino Ratio.

The table below shows the 50 stocks currently picked by the system including market capitalization levels and PEG ratios for the companies included.

There is no infallible formula to pick winning stocks, and backtested performance does not guarantee future returns. However, buying high-profitability stocks with low PEG ratios sounds like a smart idea from a fundamental investing point of view, and statistical evidence indicates that these kinds of companies tend to deliver superior returns over the long term.

Capitalize on the power of data and technology to take the guesswork out of your investment decisions. Statistical research has proven that stocks and ETFs showing certain quantitative attributes tend to outperform the market over the long term. A subscription to The Data Driven Investor provides you access to profitable screeners and live portfolios based on these effective and time-proven return drivers. Forget about opinions and speculation, investing decisions based on cold hard quantitative data can provide you superior returns with lower risk. Click here to get your free trial now.

Disclosure: I am/we are long BABA, LRCX, MU. I wrote this article myself, and it expresses my own opinions. I am not receiving compensation for it (other than from Seeking Alpha). I have no business relationship with any company whose stock is mentioned in this article.

68 Comments
To ensure this doesn’t happen in the future, please enable Javascript and cookies in your browser.
Is this happening to you frequently? Please report it on our feedback forum.
If you have an ad-blocker enabled you may be blocked from proceeding. Please disable your ad-blocker and refresh.