He reminds us that housing bubbles follow a predictable progression:

Rubino cites recent statistics that may indicate the US national housing market is finally entering Stage Two after a rip-roaring decade of recovery since the bursting of the 2007 housing bubble:

Taken together, these suggest that residential housing supply is increasing as sales slow, exactly what you'd expect to see in the transition from Stage One to Stage Two.

Stage Two's deluge of supply sets the table for US housing bubble Stage Three by soaking up the remaining demand and changing the tenor of the market. Deals get done at the asking price instead of way above, then at a little below, then a lot below. Instead of being snapped up the day they're listed, houses begin to languish on the market for weeks, then months. Would-be sellers, who have already mentally cashed their monster peak-bubble-price checks, start to panic. They cut their asking prices preemptively, trying to get ahead of the decline, which causes "comps" to plunge, forcing subsequent sellers to cut even further.

Sales volumes contract, mortgage bankers and realtors get laid off. Then the last year's (in retrospect) really crappy mortgages start defaulting, the mortgage-backed bonds that contain their paper plunge in price, et voila, we're back in 2008.

Rubino's article is timely, as we've lately been seeing a proliferation of signs that the global boom in housing is suddenly cooling. I've also recently encountered similar evidence that the housing market in my own pocket of northern California is weakening, and I'm curious to learn if other PeakProsperity.com are seeing the same in their hometowns.

Housing, as they accurately say, is local. Conditions differ from region to region, making generalizations of the overall market difficult.

That said, the tsunami of $trillions printed by the world's central banking cartel since 2008 clearly found its way into the housing market.

The world real estate market is HUGE, over $200 trillion. That dwarfs the global debt and equity markets. So it's no surprise the central authorities did all they could to reverse the losses the GFC created for property owners.

As a result, many of the most popular locations to live are now clearly in bubble territory when it comes to home prices: 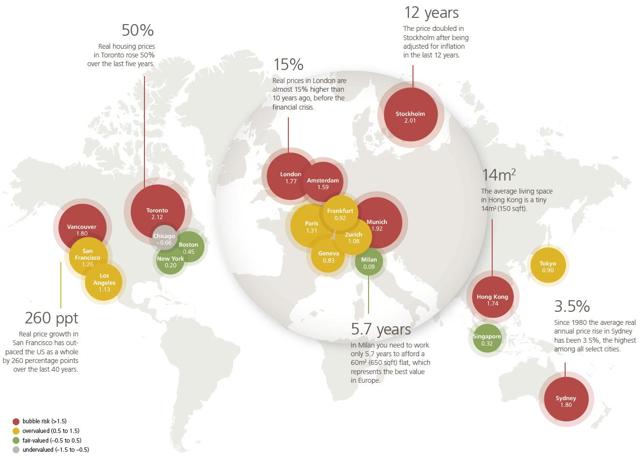 The chart above displays the most bubblicious major cities around the world in red. But it's important to note that the merely 'overvalued' markets denoted in yellow, and even some of the green 'fair-valued' ones, are still wildly-unaffordable for the average resident.

For example, in "yellow" San Francisco, where the median home now costs $1.6 million, prices are well-above the excesses seen during the previous housing bubble: 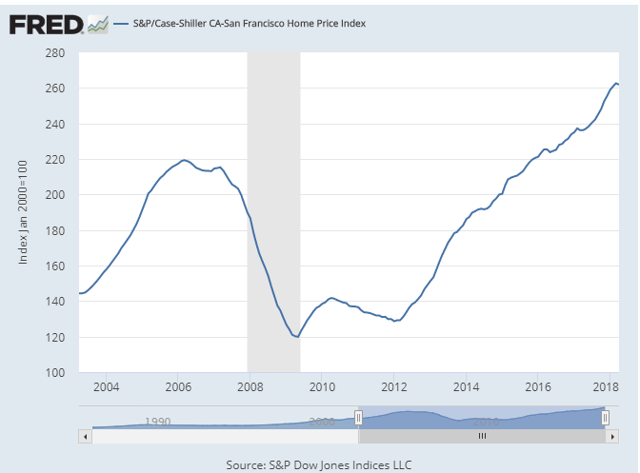 And in 'fair-valued' New York City, the median household must spend 65% of its annual income on housing alone.

Is it any wonder that 70% of millennials who don't yet own a home fear they'll never be able to afford one?

At the end of a speculative bubble, it's the assets that are most overvalued that correct first and correct hardest.

When we take a closer look at what's currently going on with the red-hot real estate markets noted in the chart above, we indeed see evidence supportive of Rubino's claim that the decade-long Stage One mania may now be ending.

Here's a spate of recent headlines about these cities:

As mentioned, I live in northern California, quite close to Santa Rosa.

Things here aren't as nuts as they are in San Francisco; but it's still a moderately-affluent region with lots of second homes. It's one of the semi-frothy areas I'd expect to see cooling off in first should there be a downwards turn in macroeconomic conditions.

Located less than an hour north of San Francisco, residential housing prices here have roughly increased 2x over the past six years as the Bay Area has boomed. Supply has been in chronic shortage, exacerbated by the loss of thousands of structures burned during last October's destructive Tubbs fire.

But recently, for the first time in many years, realtors here are beginning to talk of a softening they're seeing in the local housing market.

Median sale prices dropped from May to June, which is counter to previous years. And several towns are seeing year-over-year declines in median price - something unheard of over the past 7 years.

Meanwhile, the days-on-market ratio for properties is beginning to creep up.

Of the greatest concern to the realtors in my area: bidding wars are no longer happening. Houses are selling either at or below asking prices now. That's a *big* development in a market where houses have routinely sold for $50-100K+ above the listing price.

In a similar vein, I'm hearing evidence of the softening rents down in San Francisco and the East Bay (Oakland/Berkeley). Wolf Richter has done a good job chronicling the substantial volume of newly-constructed units that have recently hit the market threatening to depress rents, and I've heard from a multi-family unit owner down there how landlords in the area are now finding their rents ~$500 too high for the market to bear.

This is all early and anecdotal data. It's too little at this point to claim definitively that my local housing market has entered Stage Two.

But I'm curious to hear from other PeakProsperity.com readers. What are you observing in your local markets? Are you seeing similar signs of concern?

Please share any insights you have in the Comments section below. Collectively, we may be able to add clarity, in one direction or another, to Rubino's hypothesis.

Whatever the timing, Stage Two is an inevitability for today's ridiculously-overpriced real estate markets. It's not a matter of if it (as well as Stage Three) arrives, but when.

Given the data above, I think Rubino is correct in his assessment. Or at least, correct enough that prudent action is warranted today.

This makes even greater sense when considered along with the current trends of rising interest rates and quantitative tightening. Remember, home prices and interest rates have a mathematically inverse relationship: as rates go up, home prices must go down (all else being equal). And as central banks start withdrawing in earnest the excess liquidity that inflated property values to their current nose-bleed heights, expect further downward pressure on prices.

To drive the urgency home even harder, we haven't even yet talked about the damage an economic recession and/or a painful correction in the financial markets would wreak on the real estate market. With the current expansion cycle the second-longest on record and our all-time-high markets looking increasingly vulnerable, it seems very unlikely we'll avoid at least one of those crises in the near to mid-future.

Here are worthwhile steps we recommend at this point:

Chris Martenson
3.39K Followers
Dr. Chris Martenson is an independent economist and author of a popular website, ChrisMartenson.com. His Crash Course video series explores the intertwining significance of the “three E’s”—the economy, energy, and environment and offers articulate, dynamic insight into the workings of our monetary system. Chris earned a PhD in neurotoxicology from Duke University, and an MBA from Cornell University. His background as an educator helps him animate complex material with wisdom and humor. A fellow of the Post Carbon Institute, Chris’s work has appeared on PBS and been cited by the Washington Post. He is a contributor to the Huffington Post and FinancialSense.com. Chris is an accomplished presenter who has offered the Crash Course seminar all over the United States. The online course has been translated into several languages, and been viewed nearly a million times. His website offers ongoing commentary and rigorously factual analysis into financial and energy-related issues and events as they unfold.