Here is the latest from the NY Fed:

The UIG derived from the "full data set" increased from a currently estimated 3.28% in May to 3.33% in June.

The twelve-month change in the June CPI was +2.9%, a 0.1 percentage point increase from May, and the highest reading since February 2012.

The UIG measures currently estimate trend CPI inflation to be approximately in the 2.3% to 3.3% range. Since January, there has been a notable pickup in the twelve-month change in the CPI from 2.1% to 2.9%, with this series now moving closer to the UIG "full data set" measure.

Economists at the NY Federal Reserve Bank introduced a new measure of trend inflation in September 2017, the Underlying Inflation Gauge (UIG), meant to complement the current standard measures. Investors and policymakers alike have an interest in the behavior of inflation over longer time periods.

The trend component of inflation is not an observed measure and a proxy measure is required to calculate it. To calculate trend inflation, transitory changes in inflation must be removed, such as volatile components or specific items. Core CPI, which is the most widely used and accepted form of estimating trend inflation, only focuses on price components. The UIG derives trend inflation from a large set of data that extends beyond price variables. Additionally, it has shown higher forecast accuracy than traditional core inflation measures.

Here's what the NY Fed says about the UIG:

"... the design of the UIG is based on the premise that movements in trend inflation are accompanied by related changes in the trend behavior of other economic and financial series. Consequently, we examine a large data set to identify the common component of other economic and financial series and then focus on the persistent part of the common component."

The UIG uses a dynamic factor model for large data sets and uses two different sets for calculations. The first is a disaggregated price data series in the CPI, called "prices only", and the second is the CPI disaggregated price series plus a wide range of macroeconomic and financial data, called the "full set". The major difference between, say, Core CPI data and the UIG data is that the UIG adds instead of removes information that signal changes in trend inflation. 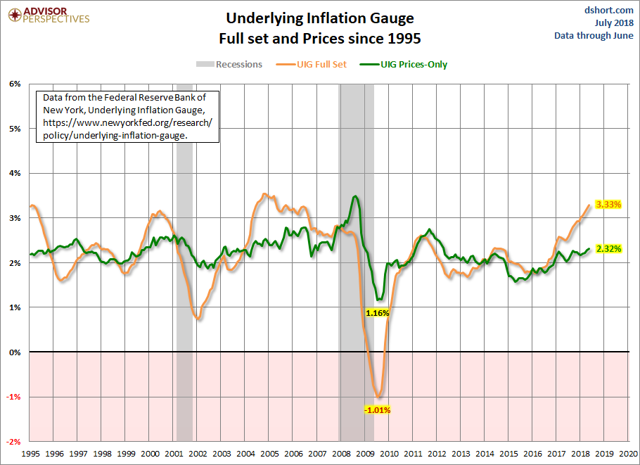 Here are the two UIG series compared with Core CPI. The full set diverges from Core CPI often, and there are periods where UIG movements lead those in Core CPI. 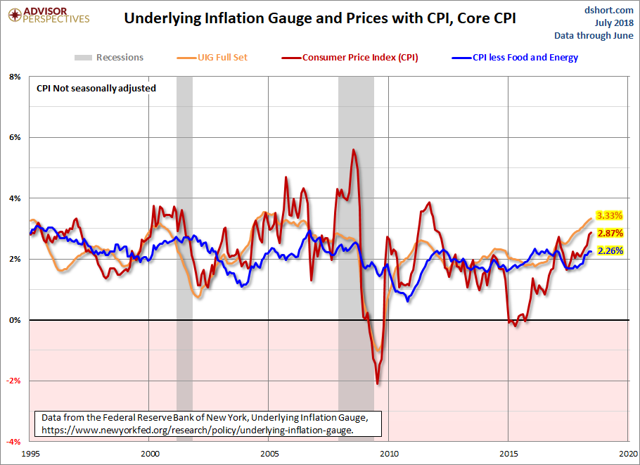 Let's take a closer look at UIG and Core CPI. Note the divergent periods - the red arrows indicate the respective peaks of the two series. The UIG has lead major turning points in the CPI. 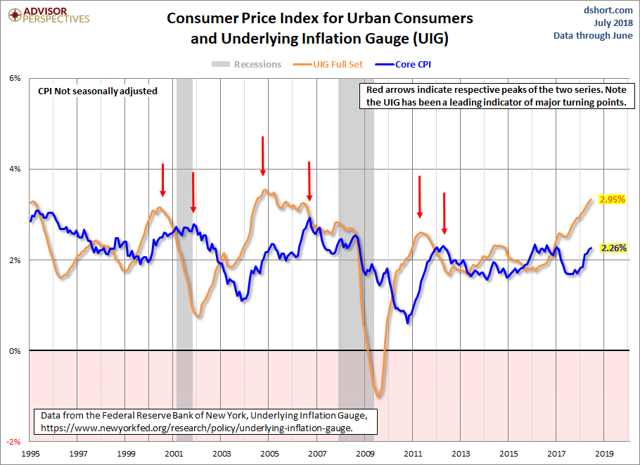 The UIG can be a useful complement to the traditional core inflation measures. While the NY Fed economists caution placing too much emphasis on UIG as a forecasting tool, the UIG still offers meaningful information not provided in Core CPI.

Doug Short
6.04K Followers
Advisor Perspectives is a leading interactive publisher for Registered Investment Advisors. Our AP Charts & Analysis portion of our website analyzes economic and market trends.
Follow
1 Comment
To ensure this doesn’t happen in the future, please enable Javascript and cookies in your browser.
Is this happening to you frequently? Please report it on our feedback forum.
If you have an ad-blocker enabled you may be blocked from proceeding. Please disable your ad-blocker and refresh.