Who knows why the yield curve is so good at predicting recessions? Mechanistically speaking, why were the last recessions always preceded by a negative 10Y-2Y yield spread? How does it work? Certainly the Federal Reserve does not seem to understand. We can see this in the latest Fed minutes release where a discussion of the flattening yield curve is outlined, but meeting participants did not agree as to whether the yield curve actually means anything anymore. Here is the relevant part of the minutes (emphasis mine):

Meeting participants also discussed the term structure of interest rates and what a flattening of the yield curve might signal about economic activity going forward. Participants pointed to a number of factors, other than the gradual rise of the federal funds rate, that could contribute to a reduction in the spread between long-term and short-term Treasury yields, including a reduction in investors' estimates of the longer-run neutral real interest rate; lower longer-term inflation expectations; or a lower level of term premiums in recent years relative to historical experience reflecting, in part, central bank asset purchases. Some participants noted that such factors might temper the reliability of the slope of the yield curve as an indicator of future economic activity; however, several others expressed doubt about whether such factors were distorting the information content of the yield curve. A number of participants thought it would be important to continue to monitor the slope of the yield curve, given the historical regularity that an inverted yield curve has indicated an increased risk of recession in the United States.

Given that the yield curve has now fallen below a 25-basis point spread between 10Y and 2Y rates, that’s a 30 basis point fall in two months, the fall to negative could be imminent. Meanwhile, Fed members can’t seem to agree on whether this actually means anything in the first place. It does, and here I’ll attempt to explain how and why, to the best of my own understanding at least.

In my last piece I explained from a interest rate/debt interplay perspective why the dangerous part of yield curve fluctuations is when it turns positive after turning negative for a prolonged period. The basic thesis was that interest rates will go higher across the board once the curve turns back up because there is already intense pressure in the overnight federal funds rate due to heavy borrowing by the Treasury crowding out available liquidity to the private sector, and a heavy concentration of excess reserves in only 5% of banks, which control 90% of the excess liquidity available. With inflation turning higher, now 3.4% annual on the Producer Price Index, 2.9% on the Consumer Price Index and 2.3% on Personal Consumption Expenditures, all measures way above the 2% target, in the end it’ll be a choice between the dollar or the bond market, which is the real problem here.

Here I’d like to take a different angle and analyze the situation from a mechanistic monetary perspective. What exactly happens when the yield spread turns back up after being in negative territory, and why does recession seem to happen only after the curve turns positive again? In order to understand why this is so, we need to go back into the money supply data.

The basic thesis of Austrian Business Cycle Theory is that when money supply growth stops after a period of monetary (not necessarily price) inflation, the bust sets in. So in broad strokes, here is the simple explanation. Banks borrow short term and lend long term, and by doing so create money through fractional reserve. A negative spread would preclude banks from profiting by doing this, and therefore the money supply stops growing, and the bust sets in.

However, it’s not that simple. The broad strokes explanation may be true generally, but there are details missing. Let’s try to fill in the gaps.

And we can see that this is basically true. Here is the 10Y-2Y yield spread from January to December 2000, versus M1 money supply, which includes demand deposits but not savings deposits. As you can see, as the spread went negative from February to December 2000, M1 shrank, from about 1.25 trillion to 1.10 trillion. 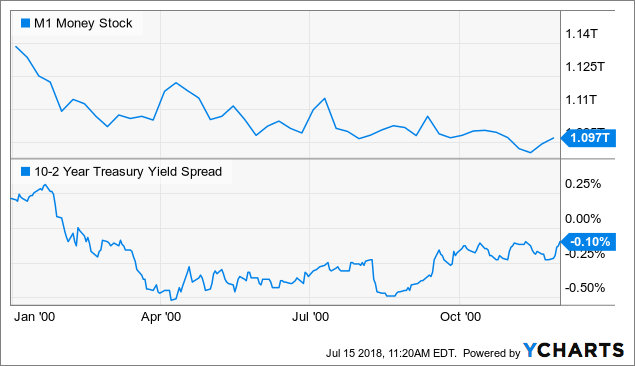 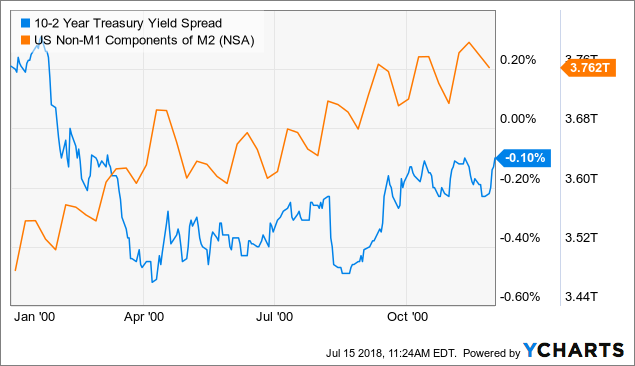 Now let’s take a look at what happened to M1 when the yield spread was steeply positive, for example from April 2003 to April 2004. 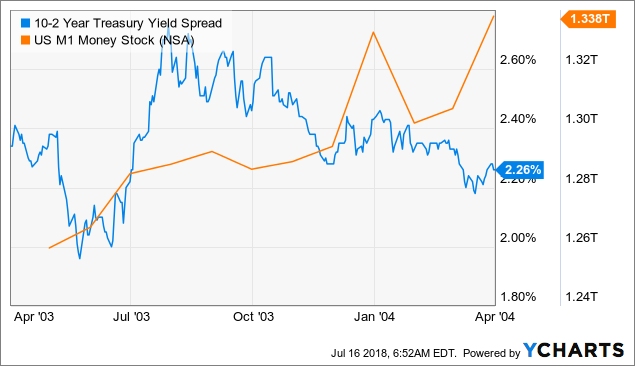 As you can see, M1 expanded by over 6% during this time. The trend is that M1 shrinks when the yield spread is negative, and grows when it is positive.

But why doesn’t non-M1 M2, namely savings deposits, necessarily shrink during negative yield spreads? Because banks can keep lending out savings deposits with no reserve requirement, so they don’t have to borrow short immediately in order to replenish reserves. The only time they have to do that is when savings deposits are drawn down.

If savings deposits are drawn down, then we have a situation where not just M1, but M2 as well is stagnating because then banks have to borrow short term in order to satisfy savings redemptions, which makes savings loans unprofitable at a negative spread. And why would people drain their savings accounts? To chase a bubble.

Then what happens when savings deposits are drawn down? Banks stop making loans based on savings accounts, stop borrowing short, and interest rates on the short end stop getting bid up and the yield spread turns positive again. In that brief window before M1 starts growing again and savings loans slow down, that’s the signal that M2 money supply is about to stop expanding as a whole, which according to Austrian Business Cycle Theory, is when the bust sets in.

So how could it play out this time? The yield spread going negative shouldn’t crash the market by itself. It simply signals an abundance of short term borrowing and long term lending. If the yield spread stays negative for 6 months or longer and then heads back up, that’s the signal of an imminent recession possibly accompanied by a popping bubble.

Since we are almost over the seasonal hump in money supply stagnation and given where the yield spread is now, we probably have another year to go before the spread finishes the pattern of going negative, staying there long enough to shut down M1 expansion, and then savings being drawn down to shut down M2, which would probably happen during its seasonal period around this time next year.

Alternatively, the spread could go negative in a month or two and trigger panic since everyone is watching this indicator. We’ll just have to wait and see which scenario plays out, but it sure does look risky out there.