Well, I'll say one thing for the media circus that accompanied the Trump-Putin summit in Helsinki on Monday and the subsequent firestorm that dominated headlines on Tuesday, it provided something of a reprieve from the previously incessant trade headlines that have weighed on market psychology from New York to London to Hong Kong.

On Sunday evening, in my traditional week ahead preview, I (half-jokingly) suggested that the Helsinki summit might actually be a positive for risk assets to the extent it distracted everyone in Washington from the multi-front trade war the administration is fighting. Here's a quick excerpt:

On the bright side, it’s possible the Putin media circus will temporarily distract Trump from escalating the trade war with Beijing any further, although given the latest read on America’s trade deficit with China, one certainly imagines Xi isn’t far from the President's mind. Data out late last week showed the U.S.-China deficit hitting an all-time high.

To be clear, investors and large allocators of capital aren't likely to quit fretting about trade any time soon, even if other geopolitical concerns prove more pressing in the very near-term. As I wrote in a separate Sunday evening post for this platform, "we're all afflicted" by the trade delirium.

Indeed, the latest edition of BofAML's Global Fund Manager survey shows "trade war" took the top slot in the "biggest tail risk category" for July, and by a wide margin:

When I say "wide margin" I mean that it wasn't even close. Here's the bank's Michael Hartnett:

On Tuesday, Jerome Powell was on Capitol Hill to testify before the Senate Banking Committee. He tried to avoid the trade issue, at one point going so far as to say, when pressed about the possible implications of tariffs for the domestic economy, that he wanted the Fed to "stay in its lane".

I'm not going to editorialize on that for the purposes of this post other than to say I find it a bit odd that the Fed chair would suggest it's somehow inappropriate for him to pontificate on the possible effects of trade policy on the U.S. economy; especially at a time when, to quote the above-mentioned Michael Hartnett, "new US tariffs are set to boost US protectionism to highest level since mid- 1970s".

Powell did reiterate a point he's made on at least one other occasion of late with regard to the fact that, on balance, protectionism is not conducive to a healthy economy. Here's the actual quote from the Q&A session that followed his prepared remarks to lawmakers:

In general, countries that have remained open to trade, that haven’t erected barriers including tariffs, have grown faster. They’ve had higher incomes, higher productivity. Countries that have gone in a more protectionist direction have done worse.

Here's what SocGen's Kit Juckes said in a note out Tuesday morning:

The US economy is in good shape but the President [is] laying waste to the global synchronized growth theme.

Those interested in a more in-depth discussion of this are encouraged to peruse the "we're all afflicted" post linked above, but suffice to say that whether he wants to discuss it publicly or not, Jerome Powell is going to find himself talking about the possible effects of tariffs and the potential for spillover from trade-related growth disappointments outside the U.S. more often than he would like, unless there is a dramatic reversal of course from the USTR and the Commerce Department sometime in the near future.

Also on Tuesday, Republican Senator Orrin Hatch suggested he is prepared to move forward with legislation aimed at curtailing the President's power to dictate trade policy should more tariffs end up being imposed.

I wanted to take this opportunity to point out something interesting that I certainly imagine most readers here haven't observed on their own, although it is, to a degree, intuitive. Bear with me for a few paragraphs so I can set it up.

Everyone knows the yuan has been in focus for the last several months as traders hold their breath to see if, when and to what extent, the PBoC will effectively weaponize the currency in an effort to offset the assumed drag on the Chinese economy from the trade frictions with the U.S.

So far, it appears Beijing is letting the market push the yuan weaker as the combination of looser monetary policy (relative to the Fed) and lukewarm economic data, undercut the bull case for the currency. There's a ton of good analysis regarding the PBoC's decision calculus in "The Art Of Currency And Trade War: Inside China’s Thinking On The Yuan", but simply put, what you should keep in mind is that with each passing escalation from the Trump administration, it gets more likely that Beijing will be unable to mechanically retaliate with their own tariffs.

I make this point over and over again, but it's one of those things that truly cannot be emphasized enough. There is a mathematical upper limit here, beyond which China will be forced to resort to something other than reciprocal duties:

Actively depreciating the yuan (as opposed to what they're doing now, which is basically just letting it weaken), is only one of Beijing's options, but the fact that it's on the table is disconcerting.

Ok, now to the "interesting" part alluded to above. If you look at realized and implied volatility on the yuan and also on the S&P (SPY), they're doing "very different things" (to quote Deutsche Bank's Aleksandar Kocic, from whose Monday note the following charts are pulled):

But look at the risk premium story: 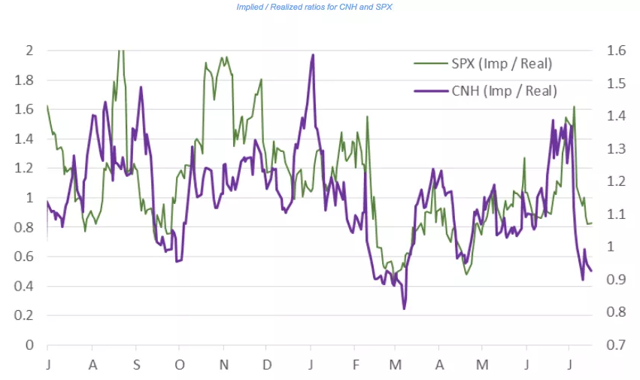 As Kocic writes in the note mentioned above, "I think that both emerging market currencies (and EM assets in general) are responding to the same risks as developed market risk assets, at least on the level of implied risk premia."

The relationship in that chart seems to suggest that the market has been aware of the potential for turmoil in emerging markets to feedback into developed market assets since at the least the start of 2018.

If nothing else, it underscores the notion that what happens in China isn't likely to stay in China, something Goldman elaborated on over the weekend. Here's are a couple of quick excerpts from their piece:

The greater synchronization of global equity markets raises the risk that the US could “import” a recession via financial channels in a more adverse scenario. Indeed, this is the most plausible channel through which a trade war or foreign slowdown could tip the US into recession. The surprisingly strong reaction of the US equity market to growth fears in China in late 2015 and early 2016 offered a reminder of this trend.

So while the Helsinki circus might have paradoxically given everyone a reprieve by taking the focus off the trade war threat, the tail risk here is precisely what the fund managers polled by BofAML for the survey mentioned here at the outset suggested it is: trade.

Those fund managers control, together, more than a half trillion in assets.