The phrase "yield curve inversion" may not be up there with "Taylor Swift" or "Kim Kardashian," but it has by now cropped up in the media so often that people are Googling it all of a sudden: 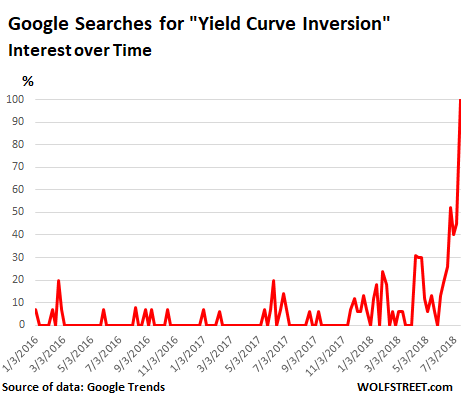 Markets are by now taking this "yield curve inversion" for granted. It's going to happen, it's just a matter of time, they say, and whether it'll be next week or at the next rate hike is not crucial.

This idea that the yield curve must invert is based on the principle that the Fed is raising its target range for the Federal Funds rate, an overnight rate, and that these higher rates are filtering into short-term Treasury yields, such as the one-month yield, the three-month yield, or the two-year yield. Meanwhile, the 10-year and 30-year yields are doomed to be stuck. And when the two-year yield gets pushed above the 10-year yield, that's the moment of "inversion."

An inversion of the yield curve, which happens rarely, has become a popular and accurate recession indicator over the past decades. The last time it inverted was followed by the Financial Crisis.

The chart below shows the yield curves on December 14, 2016, when the Fed got serious about raising rates (black line), and today (red line). Note how the red line has "flattened" compared to the black line. The spread between the two-year and the 10-year markers, at just 24 basis points today, is minuscule compared to the 127-basis point spread on December 14, 2016: 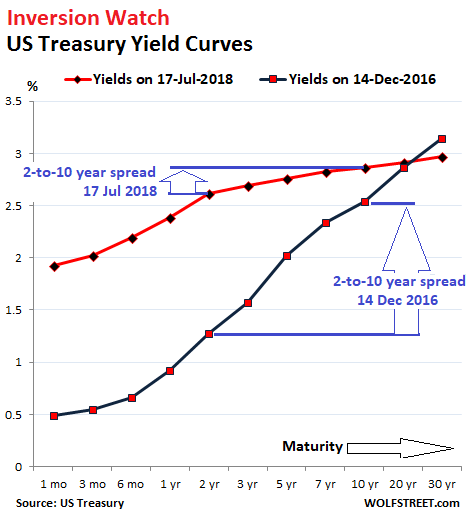 The chart below shows how the spread between the two-year yield and the 10-year yield appears to be headed to zero - a flat yield curve - or below zero, which would be the inversion moment: 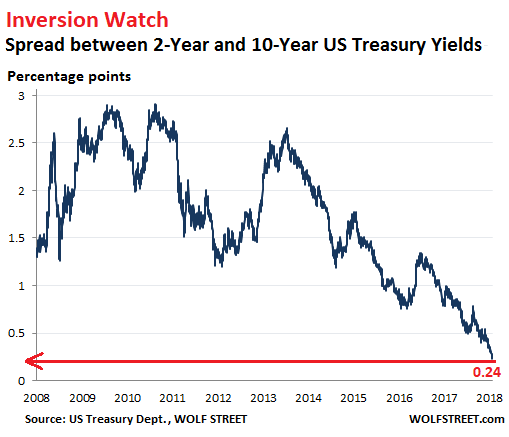 There seems to be an air of inevitability to the coming inverted yield curve. "The Treasury curve is on a one-way trip to inversion," Bloomberg called it, citing Bank of America Merrill Lynch's fund manager survey. According to this survey, only 33% of the fund managers believe that the yield curve will steepen over the next 12 months, the lowest since 2011. Conversely, 67% of the fund managers would expect the yield curve to either stay the same, flatten further, or invert.

The possibility of a snap-back of the 10-year yield, which is infamous for violent snap-backs, is practically removed from this scenario. These fund managers are starting to line up on the same side of the boat.

This is the same crowd whose sentiment peaked at the end of 2016 that the yield curve would further steepen, after it had already steepened sharply for months. But instead, the yield curve changed course at the beginning of 2017 and started flattening - and hasn't stopped since.

There is no doubt that there will be a recession. There are always recessions. The only question is when. There is a good chance that this might happen starting in 2019 or 2020, whether or not it is preceded by a yield curve inversion.

By means of QE and ZIRP, or NIRP, central banks have explicitly manipulated bond markets - and other markets - to absurd levels. And in that manipulated scenario, a yield curve has lost its meaning as an indicator of economic realities.

Heck, the Bank of Japan started in September 2016 to explicitly target the yield curve, trying to keep the 10-year yield above but near 0% and shorter-term yields in the negative. "Yield Curve Control," it called this. And it worked. The yield curve in Japan is precisely where the Bank of Japan wants it to be and is no indication of anything in the economy.

The degree of bond market manipulation is not as pronounced in the US. The Fed is stepping away from its easy money policies and is turning increasingly hawkish. For many on Wall Street, raising rates and allowing markets to fend for themselves is always a "policy error." Wall Street lives on cheap money and manipulated markets. And these folks are using the brouhaha about the flattening yield curve as a pressure point to get the Fed to back off its rate hikes.

But with so many people lined up on the same side of the boat betting on an inverted yield curve, the contrarian in me thinks that markets have a way of blowing this type of consensus out of the water, and that we'll see another sharp snap-back of the 10-year yield - of the type that we saw: 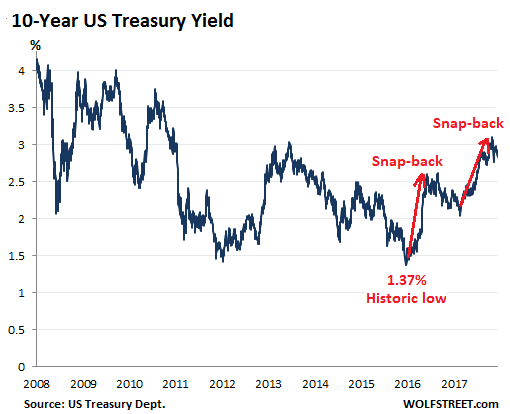 This would steepen the yield curve for a while and get the Fed through several more rate hikes before the process of flattening would start all over again. Markets, if they're allowed to do their own thing, just don't like to follow consensus.

This Fed is getting seriously hawkish: it revealed that instead of thinking about backing off rate hikes because the yield curve is flattening, it's replacing the yield curve. Read... "As the Yield Curve Flattens, Threatens to Invert, the Fed Discards it as Recession Indicator."

Wolf Richter
4K Followers
Wolf Richter is the publisher of wolfstreet.com, a site focused on business, finance, and money. The site is free. In addition to the many years at wolfstreet.com and its predecessor site, he has 20 years of C-level operations and finance experience.
Follow
7 Comments