Growth in the Canadian oil sands has made Canada the fifth-largest producer of crude oil in the world and the largest source of US crude oil imports - exceeding all of OPEC combined in 2017. The next two years - 2018 and 2019 - will see an additional half million more barrels hit the market. However, all signs continue to point to deceleration of growth in 2020.

Rising Canadian oil sands production comes at a critical time for the heavy oil market. Although the global oil market has been a story of abundance over the past few years, the heavy market has borne the brunt of the tightening global oil market. Much of the constraint shown by OPEC has come from the heavier side of their production portfolio, while output from large heavy oil producers in the Western Hemisphere - Mexico and Venezuela - has declined. Venezuelan, in particular, economic collapse has seen their production plummet. A few years ago, Venezuela output was over 2.5 million b/d. As of mid-year 2018, production has fallen to 1.4 million barrels per day, and it may fall below 1 MMb/d.

Through this period, Canada has been the primary source of material heavy oil supply growth in the world. The ongoing completion of oil sands projects sanctioned prior to the price collapse, revival of some deferred projects and some new investments in capital efficiency projects assures strong growth to the end of this decade. However, after 2019, the pace of growth in the oil sands is less certain, and to a greater extent depends on the timing of yet-to-be-made investment decisions.

Global crude oil benchmark prices - of which there is much uncertainty over - hold considerable sway over the timing of future investment decisions. Moreover, for oil sands producers, there is additional uncertainty over the adequacy of pipeline takeaway capacity, which influences the value of western Canadian crude oil over and above global benchmarks. Constrained pipelines have driven deep discounts for western Canadian heavy oil - beyond what would normally be expected based on quality and pipeline transportation costs. The price of western Canadian heavy oil compared to WTI has ranged from under $10/bbl to over $30/bbl over the past 12 months. Furthermore, pending changes to the global marine fuel quality specifications in 2020 is expected to reduce the value of high sulfur fuel oil and thus heavy sour crude oil - which is the largest form of oil sands production for a period of time.*

These uncertainties will weigh on further investment decisions until greater certainty can be achieved. The timing of future pipeline capacity and the physical act of construction have become critical signposts for the industry and investors alike. The decision by the Government of Canada in late May to take on the ownership of the Trans Mountain Expansion project demonstrates Canada's determination in seeing the project through to completion, but also unfortunately, the extent of action required. These new moves improve the likelihood this project will be completed, but there are still some questions on the ultimate time when it could be completed.

Yet, despite such challenges, IHS Markit continues to see growth in the Canadian oil sands in the medium and long term. In part, this is due to a belief that the railroads will respond and help put a cap on western Canadian price volatility, and that new pipelines will eventually be completed. But it equally relates to the long-flat production profile of oil sands production, which is unique in the world. The lack of declines means that any incremental investment, no matter how small, can add to existing projection and growth can more readily be achieved.

Over the next decade, from 2018 to 2027, IHS Markit expects 1 million b/d more output. Growth will be driven upwards by the ramp-up of recently completed projects, the resumption of construction of several projects that were deferred during the worst of lower prices, and new investments being made into capital efficiency projects that can deliver not only more oil but lower costs. This accounts for about half of the growth to 2027, and the remainder will come from projects yet to be sanctioned.

Compared to our 2017 outlook, our outlook is modestly lower because of ongoing uncertainties associated with the timing of future pipelines. Should advancing pipeline projects face additional delay, the investment outlook and IHS expectations could be negatively impacted. 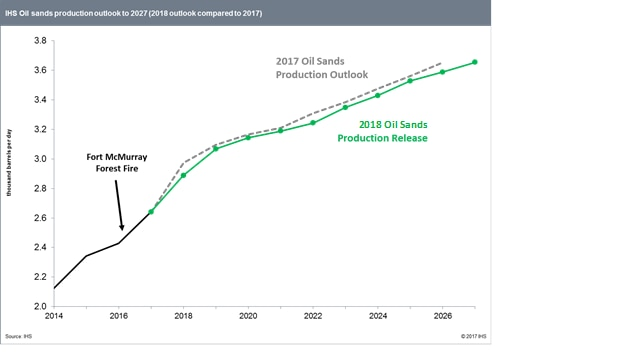 Markit
2.3K Followers
IHS Markit (Nasdaq: INFO) is a world leader in critical information, analytics and solutions for the major industries and markets that drive economies worldwide. The company delivers next-generation information, analytics and solutions to customers in business, finance and government, improving their operational efficiency and providing deep insights that lead to well-informed, confident decisions. IHS Markit has more than 50,000 key business and government customers, including 80 percent of the Fortune Global 500 and the world’s leading financial institutions. Headquartered in London, IHS Markit is committed to sustainable, profitable growth.
Follow
To ensure this doesn’t happen in the future, please enable Javascript and cookies in your browser.
Is this happening to you frequently? Please report it on our feedback forum.
If you have an ad-blocker enabled you may be blocked from proceeding. Please disable your ad-blocker and refresh.