After being chopped around by the trendless market in the last few months, investors in both camps are looking forward to the return of a momentum-driven market. The murky waters created by a choppy, directionless trading environment are making it difficult to predict the near-term trends for some sector.

However, one important market segment – namely the broker/dealers – is showing preliminary signs of getting back in sync with the market’s dominant rising trend. In today’s report, we’ll examine the latest evidence that points to an eventual re-synchronization of the market’s divergent sectors once the market’s internal problems have been completely repaired.

In light of the continued cross-currents in the U.S. equity market, Tuesday’s trading session is worth recapping. After a weak opening on Tuesday, stocks bounced back strongly to close decisively higher. The tech-led rebound pushed the benchmark S&P 500 Index (SPX) above a five-month trading range ceiling (below), while the Nasdaq Composite Index closed at a record high. 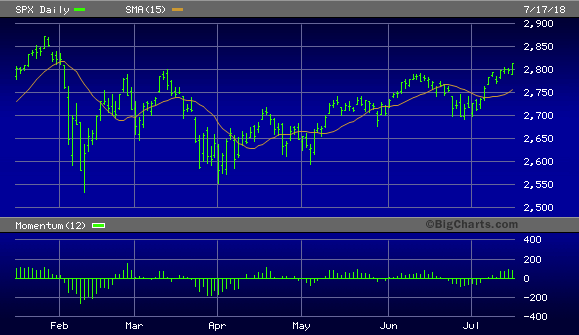 Much of Tuesday’s action centered around Netflix (NFLX), which staged a remarkable intraday turnaround. Although the stock dropped 14% intraday after the company reported Q2 subscriber growth below estimates, its intraday rebound, which cut its loss from 14% to 5%, helped fuel Tuesday’s broad market rally. Other FAANG names – including Facebook (FB), Apple (AAPL), Amazon (AMZN), and Alphabet (GOOG) (GOOGL) – followed NFLX’s lead and some made new highs. The information technology sector, which includes most of FAANGs, rose over 0.7% for Tuesday and extended its monthly gain to 5.0%.

While it was encouraging to see the Nasdaq and SPX rally again, other major averages remain stuck in neutral, including the Dow and the NYSE Composite Index (NYA). As we’ve discussed in recent commentaries, the cross-currents visible in the U.S. broad market are the result of a combination of factors. Among them are investors’ concerns over a U.S.-China trade war, rising interest rates, and the potential for an emerging markets crisis. The lack of forward momentum, which these cross-currents have resulted in, can be seen in the graph of the NYA, shown below. 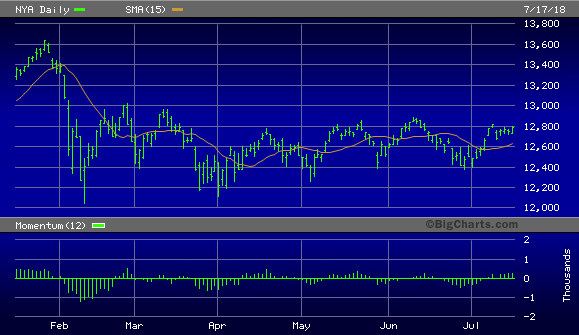 Further underscoring the split tape environment is one of my favorite momentum indicators – the S&P 500 open-close indicator. The following graph shows both the opening and closing hours of trading in the SPX each day going back several months.

The assumption behind this indicator is that professional traders are the ones who frequently take positions at the open of the trading session, therefore it is assumed that a rising opening hour indicator, see blue line below, indicates a strong upside bias for the S&P 500 large cap stocks. The amount of money required to move this indicator higher is enormous, thus a rising trend in this indicator tends to be bullish for the SPX itself. 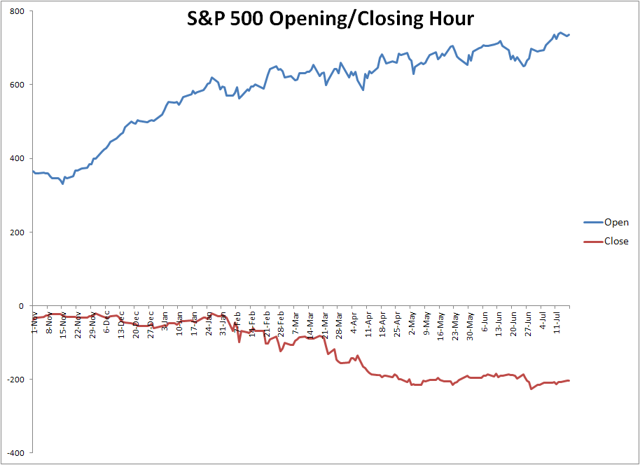 However, the closing hour component of this indicator (red line) is equally important. The closing hour of trading in the S&P 500 also reflects insider trading patterns, for the same insiders who take positions in the opening hour frequently close positions – or even initiate new positions – during the last hour of the trading day. The strongest possible stock market environment is characterized by a synchronized rising trend in both the opening and closing hour component of the open-close indicator.

As you can see in the above chart, however, the opening hour component is rising (bullish) while the closing hour component has been diverging for most of this year. The net effect of this conflicting internal trend signal is a sideways trading range of the last few months.

The implication of this indicator seems to be that the informed traders on Wall Street are at loggerheads with each other; some are engaged in a selling campaign while others are quite bullish on the market’s short term and intermediate-term prospects. At bottom of this seeming paradox is a much simpler explanation, however: There are currently pockets of strength and weakness in the market and traders are responding accordingly. The weak industry groups (industrials, gold mining, China ADRs) have been subject to distribution/selling while the strongest groups (techs, energy, retail) have been in strong hands.

Another important market area, which has evidently been the subject of a distribution campaign for much of this year, is the financial sector. Banks and broker/dealer stocks have for the most part badly lagged other leading sectors, which have held back the S&P 500 from making a new high. As I’ve intimated in previous commentaries, we need to ideally see the financial stocks – and the broker/dealer in particular – reverse their recent declines and become re-synchronized with the S&P. In turn, this would give the market a much stronger upward thrust due to the sensitive nature of the market to the banks and broker/dealers.

This dynamic may be in the process of unfolding. On Tuesday, the NYSE Arca Securities Broker/Dealer Index (XBD) closed above its 15-day moving average for the second straight day. This is the first time the index has accomplished this feat since May. More importantly, with XBD recently having settled near the low end of its 2018 trading range, the latest attempt at a breakout is very encouraging for both the stock market's short-term and intermediate-term prospects.

Although the latest technical breakout in the XBD is belated, the strength of the rally suggests that fresh new buying programs have kicked in and that money could be rotating into the financial sector stocks. Strength in the broker/dealers, when it’s sustained, invariably leads to a higher S&P 500 level. 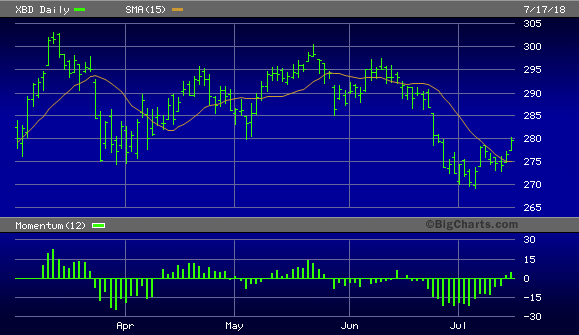 The expression “better late than never” applies here as the relative weakness in the financial sector was a lingering concern. The financial stocks still have a ways to go before catching up to the rest of the market, but as long as there is strength among the financials, the broad market’s upside potential this summer should remain intact.

While it’s gratifying to see the lagging sectors of the market gradually recovering their losses from the swoon earlier this year, it’s important not to be drawn into a false sense of security for the market’s immediate-term outlook. The latest rally is impressive but the market isn’t showing the type of sustained internal strength normally seen during extended rallies.

My primary concern is the increased number of stocks making new 52-week lows on the NYSE. On Monday, for instance, there were 54 new lows against only 46 new highs. While the new high-new low differential was much better on Tuesday, in three of the last five trading sessions, there were more than 40 new lows – a sign that the market is still subject to intermittent waves of internal selling pressure. We should ideally see the new 52-week lows on both the NYSE and the Nasdaq shrink below 40 for several consecutive days when the next synchronized rally gets fully underway.

What matters most, however, isn’t the actual number of new highs and lows as the rate of change of the new highs and lows. To that end, the 4-week rate of change component of the NYSE Hi-Lo Momentum (HILMO) index, which is based on the new 52-week highs and lows, is still in need of improvement. Below is the latest graph showing the short-term directional component of HILMO. As I mentioned in Monday’s commentary, we need to see this important measure of incremental demand for equities turn up in order to verify the strength of the market’s latest rally attempt. 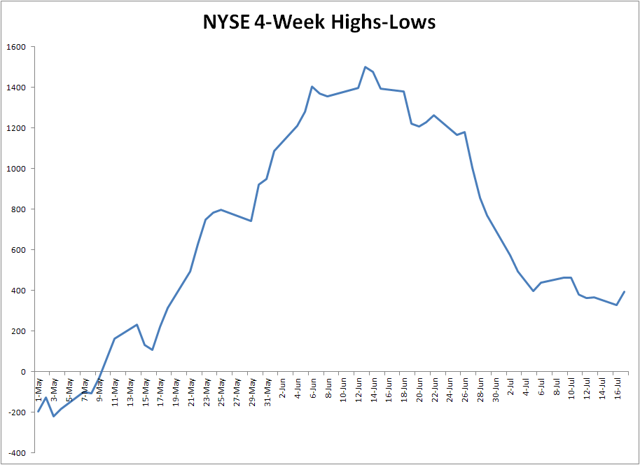 I would be remiss if I didn’t point out that the simplest indicators are sometimes the most accurate at confirming the underlying market trend. The NYSE advance-decline (A-D) line, for instance, is an important measure of breadth and it has been trending higher since the February market bottom.

That’s generally a good sign for the overall health of the stock market’s intermediate-term (3-9 month) trend, and the A-D line is one reason why investors should assume a bullish posture for the coming months despite the presence of some immediate-term internal weakness. Following the A-D line’s lead has been a simple yet winning strategy for investors this year to date.

On a strategic note, investors should maintain intermediate-term exposure to the stock market via ETFs and outperforming individual stocks in strong sectors. My continued preference is for tech sector stocks, particularly in the e-commerce sphere, consumer discretionary stocks and real estate equities. Now would also be a good time to prune portfolios by trimming losses among under-performing large cap stocks, raising stops on all long positions, and taking some profits on winners.