Equities move up over time and the evidence suggest that it is an excellent investment medium to build wealth over the long term. Still many investors get nervous when the headlines and market commentators suggest that volatile times are ahead.

We weigh the evidence and suggest that the odds are stacked against successful market timing. The best strategy for long-term investors is to remain fully invested.

Market timing... poor odds of getting it right: Timing investments into the equity market is almost impossible to get right. Even investors that manage to avoid a few bad days may end up missing good days as well - and this can hurt long-term returns. 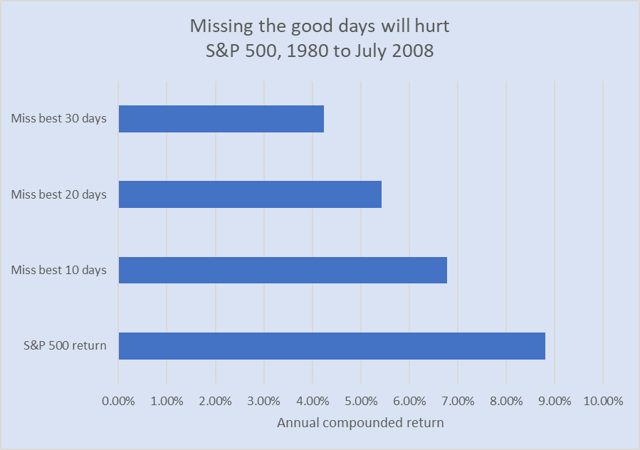 Even worse - investors that were out of the market for the 30 best days received an annual return of 4.24% with a final value of $4,595, less than a quarter of the fully invested value.

One can also argue that missing the worst 10 or 30 days in the market can improve investment results but the chances of exiting the market in time to avoid the worst days are as remote as jumping in to hit the best days.

Most of the daily U.S. equity market returns (94%) fall between +2% and -2%. The outliers, both positive and negative, appear in almost equal measure and are spread randomly through the calendar. 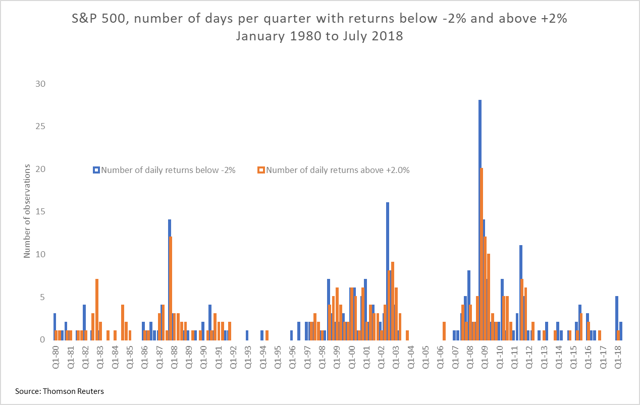 The graph indicates the number of days (grouped by quarter) when the S&P 500 dropped by more than 2% or rose by more than 2% (the outliers). The blue bars indicate the number of declining days and the orange bars the rising days. The outliers are present in most quarters and evenly split between the positive and negative outliers. Clearly, there were several quarters with heightened volatility – notably Q4 1987, Q3 and Q4 2002, Q4 2008 and Q1 2009. During these periods multiple negative outliers were recorded but perhaps surprisingly, also many highly positive trading days.

Even in periods of extreme stress such as these quarters, days of sharp declines were invariably followed by positive returns. The table indicates the 20 worst daily declines in the S&P 500 since 1980. In 15 out of the 20 instances, the market recovered in the 5 trading days after the decline, although the recovery was only about half of the loss, on average. Excluding the truly horrific market conditions of late 2008, there was only one other instance where the market did not yield a positive return in the following 5 trading days. 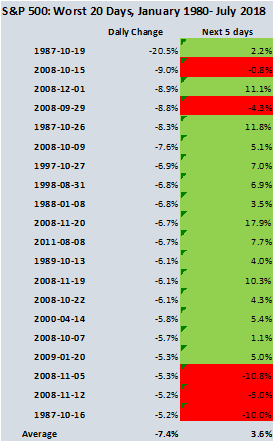 Perhaps there are traders that fancy their chances of being long and short at the right times but given the almost random appearance of the outliers, we suggest that very few investors would be able to pull this off consistently.

Equity investments hold little risk for long-term investors: Equities are often considered a risky asset class, unsuitable for risk-averse or retired investors. Critics will point to the dramatic declines in U.S. and other global equity markets between September 2007 and March 2009, when the S&P 500 lost more than 50% of its value. Nevertheless, for investors who kept their nerve at the time, the total loss in the U.S. market was recovered within four years, with the current value of the S&P 500 four times higher than at the market bottom and 80% higher than at the pre-crash peak. 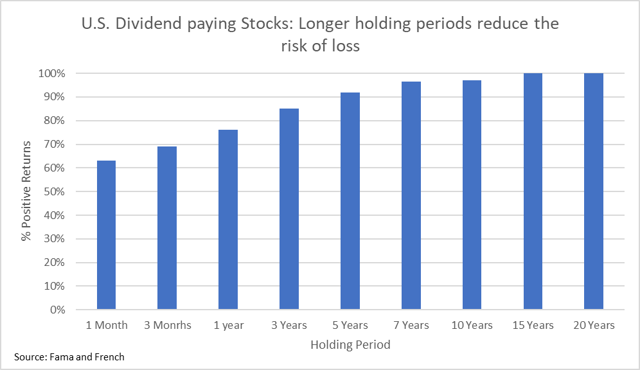 The great Warren Buffett, in his 2014 annual letter to investors, declared that the low-risk investment option is equities: He said: “It is true, of course, that owning equities for a day or a week or a year is far riskier (in both nominal and purchasing power terms) than leaving funds in cash-equivalents. For the great majority of investors, however, who can - and should - invest with a multi-decade horizon, quotational declines are unimportant. Their focus should remain fixed on attaining significant gains in purchasing power over their investing lifetime. For them, a diversified equity portfolio, bought over time, will prove far less risky than dollar-based securities.”

Long-term investors that are sensitive to short-term market volatility, could reduce their market exposure marginally or buy some insurance in the form of options but the sensible strategy remains to be fully invested.

4D Investments
252 Followers
Now a full-time investor after 25 years on both the buy and sell sides of professional investment management. My focus is on companies that pay reasonable and sustainable dividends - that is for the retirement portfolio. A secondary focus is on spotting market anomalies - and exploit them when possible.
Follow