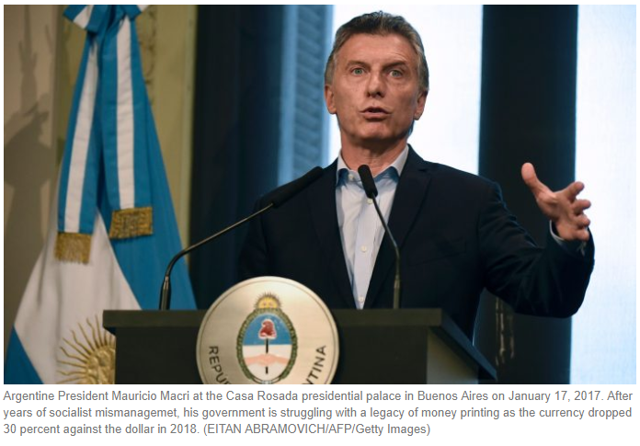 The Argentine peso has lost a third of its value relative to the U.S. dollar in the space of three months, and locals have been to this rodeo before. For seven decades, Argentina has addressed her social and economic problems with massive state interventionism and deficit spending, funded by the printing press. The result has always been the same: economic stagnation and inflation.

Now, Argentina has one of the least free economies in the world and some of the world's most complicated and highest taxes. Further, the hidden inflation tax has been brutal, at 50 percent annually between 1934 and 2012.

As the Economist magazine has written, "the problem with saviors is that, sooner or later, countries have to try to save themselves from them." Argentina has to save herself from Peronism, the legacy of the former president, military general, and "savior" Juan Domingo Perón (1895-1974). Other people may also call him a national socialist, or a fascist.

Since Argentina never became part of international socialist movements and the statism and interventionism always had a national rather than an international bent, this is what Argentina needs to save herself from.

The alternative to ridding Argentina of Peronism is more of the same. Argentine people will suffer under a gridlocked economy, and they will face more humiliation as they beg the International Monetary Fund for loans.

The Essence of Peronism

Defining Peronism can be difficult, since it stems from a politician rather than a political philosophy. It is a peculiar mix of social justice, isolationism, and deficit-driven political patronage. Perón traveled in the 1930s to Italy - then a fascist dictatorship - and learned from Benito Mussolini. On the home front, as both a minister and then as president, he formed alliances with labor unions and doled out an immense number of government jobs.

The two major manifestations of Peronism, therefore, are union dominance of the economy and a politicized central bank. In addition, centrally planned trade has jammed the ports, leading to Argentina's score of 0.29 out of 10 for trade openness, according to KPMG. Try to send anything to Argentina and you will soon see the arbitrary delays and exorbitant import duties.

Worker strikes, often violent and paralyzing, are a national sport in Argentina - after soccer, of course - as I witnessed during my year in Patagonia. Argentina leads Latin America for the number of strikes - 1,235 in 2015 alone - and the percentage of the population that participate.

The Independent Review, a journal of political economy, has published a lengthy critique of the Central Bank of the Argentine Republic. The coauthors, Nicolás Cachanosky and Adrián Ravier, note its counterproductive mandate for "social fairness" and the "fact that the [central bank] is unable or unwilling to efficiently manage the supply of currency is-or should be-undisputed."

Given this dubious mandate of the central bank, Argentina has one of the world's highest inflation rates, at 32 percent annualized, as documented by the Troubled Currencies Project. To rub salt into the wound, the National Institute of Economic Census for many years fabricated official inflation rates far below the real rates.

As a countermeasure, nationally mandated price freezes leave supermarket shelves empty for many products because price ceilings make it impossible for producers to supply the product at the below-market price.

The epitome of the inflation denial came earlier this decade when Argentine officials fixed the McDonald's (MCD) Big Mac price. The Big Mac Index is a tongue-and-cheek international metric that compares international price levels by comparing the price of a Big Mac in different countries. Because Argentina wanted to look cheaper, officials just fixed the price.

But the time for denial is over, and voters and politicians alike need to recognize that inflation stems directly from deficit spending.

The good news is that change is possible, and New Zealand's liberalization of the 1980s would be an example to follow. At that time, the former British colony faced a similar fiscal crisis but came out stronger than before.

The prescription need not be complicated. Consider what you do when you face your own fiscal crisis. You can double down and seek more credit - which delays and worsens the inevitable pain - or you can cut spending, work harder, and liquidate your assets until your debts are under control.

Argentina must do the latter.

The first step, necessary but not sufficient, is flexible dollarization, as advocated by Cachanosky and Ravier. They concur with Steve Hanke of John Hopkins University that the Argentine peso needs to go, to be replaced with the U.S. dollar or whatever currencies - or even cryptocurrencies - private businesses prefer. This sound money and low inflation policy would make it possible for businesses to plan and produce effectively again and would reign in rampant speculation and inflation arbitrage.

Ecuador has made the transition successfully, and removing the central bank would end elevated inflation and deficits funded by monetary expansion. Argentina has already experienced creeping dollarization, as people tie big-ticket items and contracts to the U.S. dollar. Bitcoin is also huge in Argentina, as it is used to evade capital controls and as a store of value.

The second crucial step is to make rapid-fire reforms, to make Argentina competitive on the world stage, and serious cuts to government spending. A critical ingredient will be the end of union monopolies for each industry and a freeing up of the labor market, since hiring someone in highly protective Argentina invokes responsibilities akin to adopting a child. Unions dominate political discourse, stand in the way of economic competitiveness, and dissuade foreign investment.

President Mauricio Macri has already started to implement some of these reforms, but the unions have made every step of the way difficult and the government could not resist the temptation of using the printing presses of the central bank to cover shortfalls in revenue.

"How can Argentina do what New Zealand did?" friends once asked me on the outskirts of Buenos Aires. In other words, how can this be politically feasible?

There is reason for optimism. Embedded political classes and protected factions are the problem, not the Argentine people. In the 1990s, they supported President Carlos Menem in efforts to undo much of the Peronist legacy, even though he had earlier run as a Peronist.

However, he presented half measures and corrupt privatization deals. He gave monopoly protections and other guarantees, such as subsidies, to the new owners and even used the one-off revenue raised from privatizations to fund social programs, rather than to pay down debts. Without deregulation or competition, the purported privatizations were pure cronyism. So the people supported the right ideas, but the president didn't deliver.

In 2015, the people voted again for change and sound economic policy with Macri of the Let's Change coalition. He has accepted a credit line of $50 billion from the IMF, which includes limited fiscal-austerity stipulations. However, the pending question is whether he will go all the way in attacking the economy's structural problems.

In order for Macri to succeed, Roger Douglas, former finance minister and chief architect of New Zealand's liberalization, says "don't blink." There can be no exceptions or industry favorites, and the reforms must be swift and across the board. That way there can be no claims of unfairness, and the reform leaders will continue to enjoy voter approval.

If they go down the middle way or even the corrupt way like Menem, Macri's movement will soon falter and Argentina will fall into the old patterns of financial and economic crisis again.

Epoch Times
780 Followers
The Epoch Times is an independent voice in print and on the web. We report news responsibly and truthfully so that readers can improve their own lives and increase their understanding and respect for their neighbors next door and around the globe. In our approach and in our content, we uphold universal human values, rights, and freedoms. We are a business that puts our readers’ interests first, in all that we do. Who We Are Epoch Times is a privately held news media company. Our network of local reporters throughout the world uncovers stories that are authentically local, yet also globally relevant. Our independence enables us to report widely and present a diversity of opinions. Our Purpose During a time when the world is changing ever more quickly, people need reliable information to understand events and trends. We strive to make a positive impact on people’s lives by helping all people understand the world and themselves, and to respect and appreciate each other. We report stories and air opinions unavailable elsewhere. A special strength of The Epoch Times is our coverage of China. Today the world is increasingly looking to China, as this troubled giant goes through tremendous changes. Business and political leaders, and also world citizens, want to understand better what is happening there. We are able to provide well-sourced stories that no one else has through the original reporting done by the Chinese-language edition of The Epoch Times.
Follow
2 Comments