While stock bulls talk up a "strengthening" economy, consumer spending growth (which drives 70% of GDP in America) has fallen to a 4 ¼-year low even before rising trade tariffs are noted in backward-looking data.

The below chart from ECRI shows that the income shortfall relative to spending is increasing, and since 2015 the cumulative shortfall is over 1% of GDP. 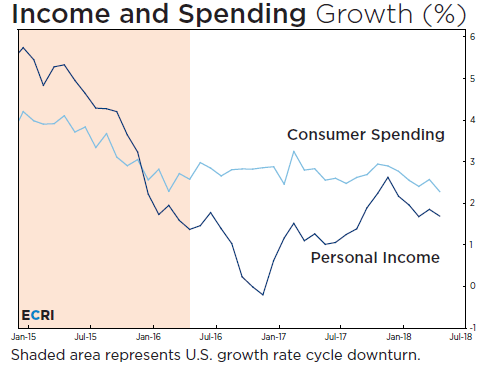 This spending gap has been financed by already indebted consumers taking on even more debt and dropping their personal savings rate back near the historic lows that preceded the 2008 recession. This is the opposite of financial strength and resilience heading into an overdue economic downturn. See Stealth slowdown unfolding:

Follow Danielle Park, CFA and get email alerts
+
Add a comment
Disagree with this article? Submit your own.
To report a factual error in this article, click here.
Your feedback matters to us!