Most of the rise in yield from its initial 5.3% yield to last week’s 7.74% average is due to rising junk bond rates and Moody’s March 27th downgrade.

However, since the downgrade – but not before – yields fell (rose) 1 bp for every $1 increase (decrease) in Tesla’s stock price. To me that makes no sense.

In addition, there’s no evidence that bond traders foresaw the March downgrade. As Tesla continues to bleed cash, another downgrade is surely possible. Are bondholders repeating their mistake?

Tesla (NASDAQ:TSLA) has one straight bond, 8-year paper issued August 14, 2017 with a 5.3% yield and a semiannual coupon. The bond initially traded at a premium, reaching a peak of 102.09 on August 14 for an effective yield of 4.89%. But since the start of October 2017 it has traded at a discount. That makes sense, because in October “B” bonds were yielding 5.5% and Moody rated Tesla’s bond B3. After all, bond traders trade the rating, not the company – what a bond pays doesn’t change with the issuer’s performance.

Since then the price has fallen, and during the week of July 9-13, the yield averaged 7.7%. Again, that’s appropriate, given two factors: the rise in “B” bond yields to 6.5%, and Moody’s downgrade of the bond to Caa1. (For an argument that focuses on the yield independent of the wider bond market, see Bill Maurer’s May 10th “Tesla Bonds Head To New Lows” Seeking Alpha article.)

Furthermore, Tesla continues to bleed cash faster than it sells cars. A further rating downgrade is certainly possible. There’s no evidence that holders of Tesla’s bond foresaw the March downgrade, even though that possibility was broached on SA by Tokyo Picker in November 2017. They seem to be repeating that mistake. 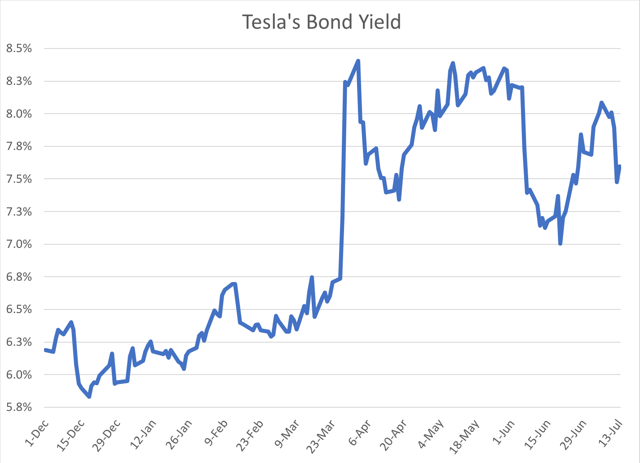 All data for the Tesla bond, symbol TSLA4530907 and Cusip U8810LAA1, are from the relevant FINRA Tesla bond trade data page.

First, the bond is today thinly traded. On July 10th, for example, the Financial Industry Regulatory Agency (FINRA) reported only 7 sell-side and 2 buy-side trades. Prices bounced around by a daily average of 52 basis points in 2018. Some of this is due to the multiple categories of fee structures and trades (e.g., dealer versus customer trades, and inclusive or exclusive of fees). I found no way to create a standardized price.

Second, I benchmark against the ICE BofAML US High Yield B Effective Yield (available for download on the wonderful Federal Reserve Bank of St. Louis FRED database). Since at-issue Tesla was rated as a “B” bond, that is a relevant comparator. However, that index provides only a daily closing price. So while it might make sense to focus on a moving average to offset the infrequency of trades, for comparability, I focus on the trade-weighted average daily price. (A few trades are reported in volume as “1MM+” which I entered into my spreadsheet as 1,010,000.) 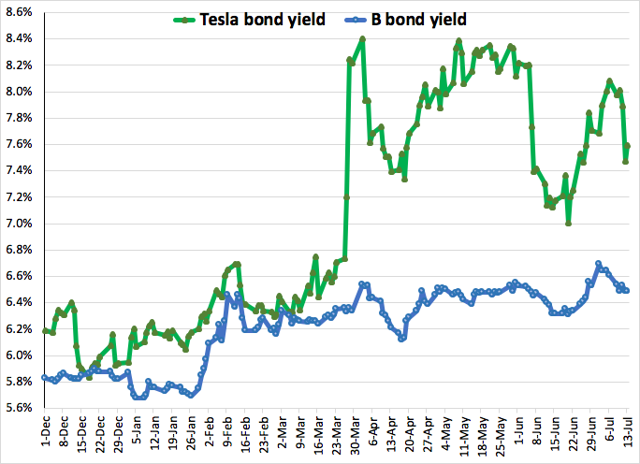 Third, because the ICE index provides only an effective yield, I convert bond prices into their yield-equivalent. Fortunately, Microsoft Excel includes a yield function that uses the date, maturity, yield, and coupon frequency – note that someone who buys the bond today isn’t buying an 8-year bond, they’re buying a bond that matures in a bit over 7 years. Correcting for time to maturity is important.

That done, I then calculate the difference between the yield on Tesla’s bond and the ICE index. To test for robustness, I also calculated daily average buy-side prices, which ought to be a bit higher than sell-side prices. However, there are days with only a sole reported buy-side trade, so those need to be taken with a grain of salt.

First, the data reflect one obvious breakpoint: Moody’s downgrade of Tesla’s bond from B3 to Caa1 on March 27th. Prior to that date, the Tesla bond yielded a 25bp premium over the ICE index. On March 28th that differential expanded to 190bp (1.9 percentage points). It dropped back once the news had been absorbed; since the downgrade the differential has averaged 140bp. This is reflected in my main observation: bond traders trade the rating. 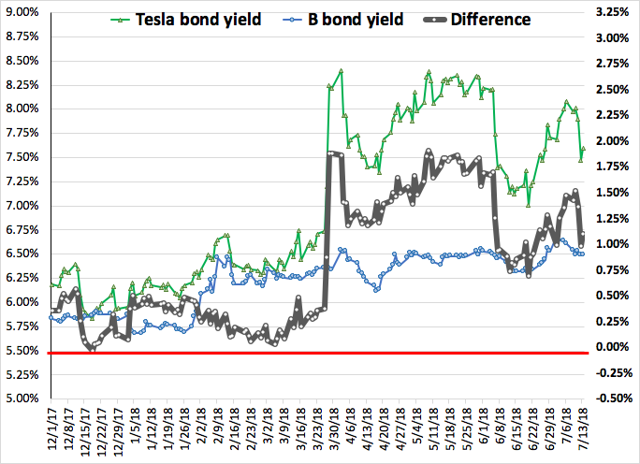 Second, the context is one of rising interest rates. In December 2018, “B” bonds yielded 5.8%. Last week, they were at 6.5%. Now with almost a decade of extremely low interest rates, we’ve seen a search for yields. The Financial Times Alphaville blog discussed this on July 12th in “The Herds and the BBBs”. They ask whether investors will stick with junk as yields on safer options rise. They in particular note that shocks – the downgrade of GM’s debt in 2005, the wave of energy-company downgrades in 2016 – can widen junk spreads. At the same time, while bondholders may face limitations on holding junk, the rules aren’t so rigid as to force a fire-sale. But in either case – a continued “normalization” of interest rates, or a negative shock – Tesla’s bondholders remain vulnerable. 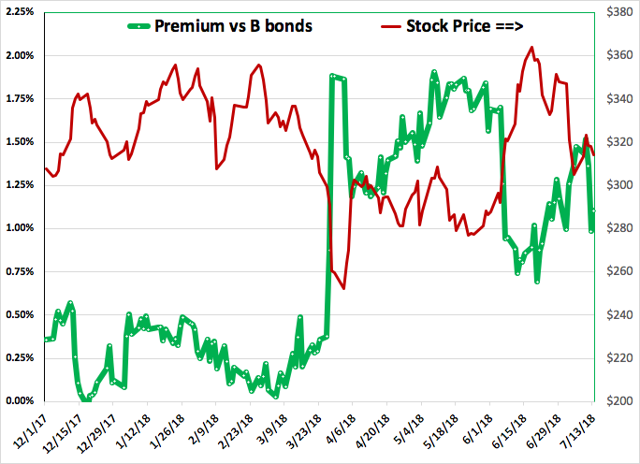 It’s not clear who holds Tesla’s bonds, but they took a big hit with Moody’s downgrade of Tesla. Most of that movement, however, was due to the downgrade, and to the general increase in yields. Still, I wonder whether bondholders are appropriately factoring in the potential for another downgrade or of generic negative shocks to the market for “junk” bonds. On this point, I urge readers to think about the soberly hilarious FTAlphaville July 18th post, “The Bond Not Taken,” which begins: “Two spreads diverged as late cycle should, …”

A puzzle remains: Since March, the yields on Tesla’s bonds show a distinct inverse relationship to the price of Tesla’s stock. Yes, prices remain within the general “junk” bracket. But I don’t expect any correlation. What’s going on? I look forward to readers’ comments.

Follow Mike Smitka and get email alerts
+
Add a comment
Disagree with this article? Submit your own.
To report a factual error in this article, click here.
Your feedback matters to us!