This kind of daily trading volume has never happened before, not once, in this ETF. Not even remotely close. The next biggest volume day was December 15th, 2016 at 27 million shares traded. In the two months following that volume spike until early February 2017, NUGT more than doubled. 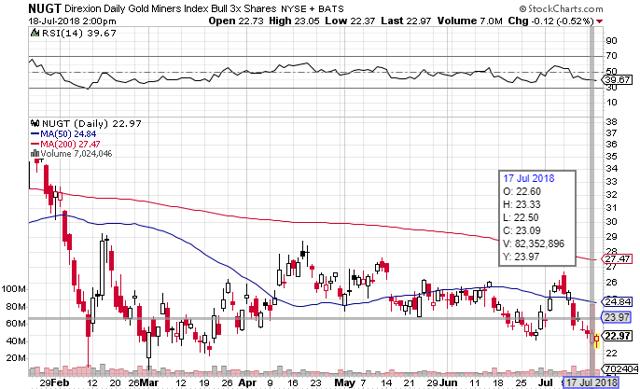 If you look at the chart above, you can see at the very edge how that volume spike sticks out like a sore thumb. The bullish case of course is that somebody or something picked up $1.7 billion in leveraged mining shares in 40 minutes after running stops in gold, so maybe something’s up. The bearish case is that so many traders were willing to sell so many shares of NUGT to this buyer or group of buyers so quickly. Even that though can be read bullishly.

If that many traders were willing to cough up NUGT shares, this may be a sign of capitulation in mining stocks. Since stops were run this would make sense. There were almost certainly plenty of stops tied to the 200-day moving average at $117.76 on the SPDR Gold Shares ETF (GLD). More stops probably were hiding just under the 52-week low on GLD at $117.40. Both levels were broken though right at market open yesterday, and that’s when we saw the massive volume in NUGT.

How else would a trader or group of traders have been able to acquire so many shares of a relatively thinly traded, obscure leveraged gold miners ETF without running price up against an enormous $1.7 billion position?

It’s not just volume though that indicates the bottom is close, or perhaps finally in now. Interestingly, while gold has been falling since April 9th, about 8.5%, gold stocks, using the Gold Miners ETF (GDX) here, have been resisting the fall spectacularly well, down only 1.1%. This is rare enough, but even more rare, is that the Junior Gold Miners ETF (GDXJ) has performed even better than the majors, down less than 1% over the same time frame. Usually, juniors are down more heavily than the majors during downturns. 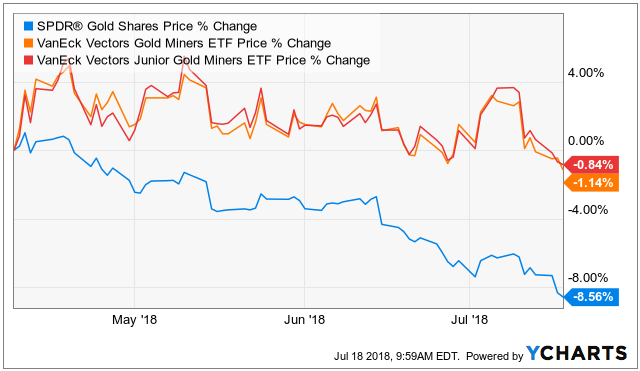 Also important to keep in mind is that since the December 2015 bear market bottom, this pattern of outperformance by gold stocks and further outperformance by junior miners has been sustained, very consistently. This is what should typically happen during a fundamental gold bull market, with cyclical pullbacks in between.

Here is the long-term chart since bear market bottom. 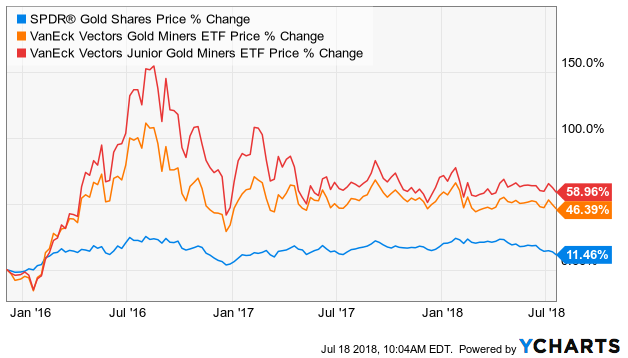 Not only have gold majors outperformed gold since December 2015, but juniors have outperformed the majors, healthy pattern that should remain consistent through a gold bull market. We can see that the reverse was true from September 2011 until December 2015.

As you can see below, during the last gold bear market, the picture was the exact reverse. Gold stocks fell way below the underlying metal, and the juniors did even worse. 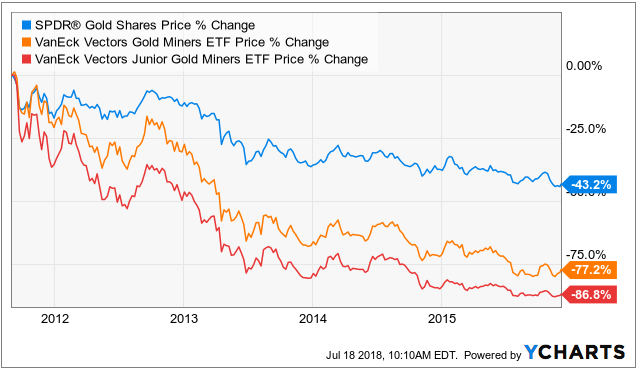 But let’s see if the pattern reverses as bear turns to bull. Here are the same securities plotted from 2014 to mid 2016, from the end of the gold bear to the beginning of the new bull. 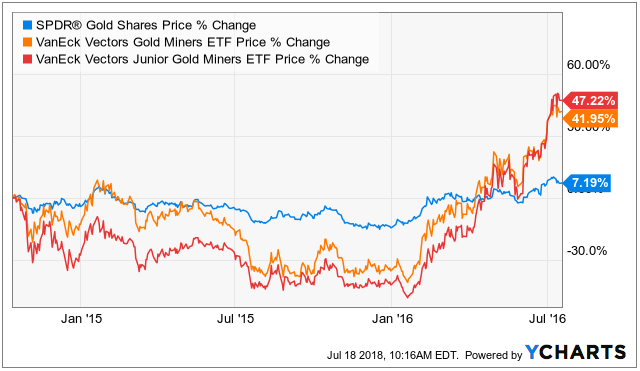 We can see two things from this chart. First, in early 2015, gold majors briefly overtook gold itself, but this was not confirmed by the junior mining stocks, which continued to lag. By July 2016, juniors had begun to confirm, by finally overtaking the majors, what many gold bugs had suspected from back in December 2015. Namely that the gold bear market was over.

This may seem like an obvious statement, but either the gold bear market is over, or it isn’t. If it isn’t then gold stocks should fall much faster than gold itself. But not only are they not falling faster than gold, they’re barely falling at all. The big question is, what will trigger the turning point for the next leg up, and when will that be? This is the kind of question that every trader wishes he knew the answer to, myself included. Instead though, let’s ask a bigger question. When will the nature of the gold bull market we are currently in since 2015 (assuming we are) change?

I have always believed that the fundamental driver of gold prices is price inflation. On a long-term chart going back to the 70s, this seems obvious. We can’t go back before that because the gold standard was still technically intact until 1971, pinning it at $35 an ounce no matter how much the money supply was inflated. That link broke when too many governments and central banks internationally started calling in gold for their dollars. But anyway, this comparison chart from Trading Economics shows that when inflation gets obvious, like double-digit obvious, gold goes ballistic. 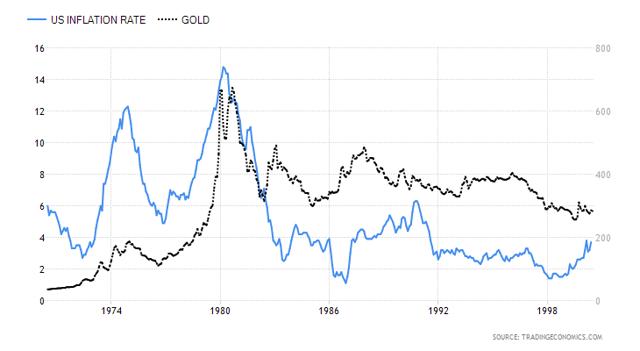 Notice the peaks in 1974-75 and 1980 in the gold price. This had nothing to do with interest rates or anything else. It was all price inflation. Then what about the gold bull market from 2000 to 2011? That was something else. That was the explosion of government debt that made investors nervous of eventual price inflation, in my opinion. 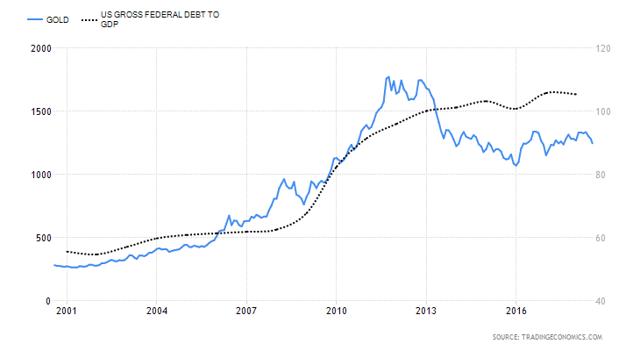 As you can see, the gold price since 2000 has roughly correlated with US government debt to GDP. But since obvious price inflation never materialized, and by that I mean double-digit inflation, gold has been in a holding pattern since debt to GDP started leveling off around the same time that the gold bull market that began in 2000, ended. Now, we are at a new base for gold prices. Obvious price inflation is what will change the nature of this bull market to something more frantic.

Why not bitcoin? Because it hasn’t functioned as an inflation hedge in emerging markets where there have been severe currency downturns, which I covered back in May. Bitcoin spikes up and down unpredictably, and can’t be relied on to perform well during periods of high price inflation.

As to price inflation, we are a hair away from 3% on the CPI, already at 3.4% on the PPI, and for the first time since December 2011, we have breached 2% on the Core PCE index, which is what the Federal Reserve is actually referring to when it talks about inflation. The trade war is worsening, so we will have supply side constrictions on goods, government spending is not going down, and we are starting to see mainstream media take notice of inflation.

Given the $1.7 billion position just taken in the 3x leveraged gold bull ETF, the largest by far of any single day ever, something is up. The next PCE report by the Bureau of Economic Analysis is due on the 31st. That could be the turning point, or it could turn on nothing in particular. But whenever it will be and for whatever reason, it will be soon. If the gold bull market is still intact, and the action of mining stocks indicates that it is, then there isn’t much farther downside from here, if any.

Disclosure: I am/we are long GLD, GDX, GDXJ. I wrote this article myself, and it expresses my own opinions. I am not receiving compensation for it (other than from Seeking Alpha). I have no business relationship with any company whose stock is mentioned in this article.