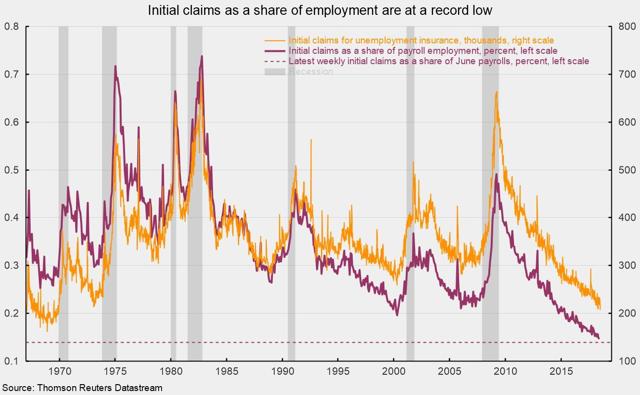 The latest data on new filings for unemployment insurance suggest the labor market remains tight. Data from the Employment and Training Administration within the Department of Labor show initial claims for unemployment insurance fell to 207,000 for the week of July 14, the lowest reading since 1969. The weekly result is down from a revised 215,000 in the prior week. Using a four-week average to smooth weekly volatility, the latest average came in at 220,500, down from 223,250 in the prior week. A level of claims below 300,000 is considered consistent with a strong labor market. When measured as a percentage of payroll employment, claims are about 0.146 percent for the month of June. Using today's data and the June payroll data, the percentage would fall to 0.139, the lowest on record and well below the levels seen in the late 1960s and early 1970s (see chart).

The Beige Book from the Federal Reserve is a qualitative assessment of economic conditions in the 12 regional Federal Reserve districts. The latest edition was compiled for the upcoming Federal Open Market Committee (FOMC) meeting. The next FOMC meeting is scheduled for July 31-August 1. According to the latest release:

Economic activity continued to expand across the United States, with 10 of the 12 Federal Reserve Districts reporting moderate or modest growth. The outliers were the Dallas District, which reported strong growth driven in part by the energy sector, and the St. Louis District where growth was described as slight. Manufacturers in all Districts expressed concern about tariffs and in many Districts reported higher prices and supply disruptions that they attributed to the new trade policies. All Districts reported that labor markets were tight and many said that the inability to find workers constrained growth. Consumer spending was up in all Districts with particular strength in Dallas and Richmond. Contacts reported higher input prices and shrinking margins. Six Districts specifically mentioned trucking capacity as an issue and attributed it to a shortage of commercial drivers. Contacts in several Districts reported slow growth in existing home sales but were not overly concerned about rising interest rates. Commercial real estate was largely unchanged.

Combined with recent testimony to Congress by Fed Chairman Jerome Powell and favorable results across a range of economic indicators, it seems likely that the FOMC will continue on a path of slowly increasing short-term interest rates (a total of four quarter-point increases are expected in 2018) while also continuing to shrink the Fed's balance sheet by reducing reinvestment of maturing securities. The gradual reversal of accommodative monetary policy is appropriate given economic conditions and is likely to support continued economic expansion.

The Leading Economic Index from The Conference Board posted a 0.5 percent increase in June following a flat reading in May and a 0.4 percent increase in April. That puts the 6-month and 12-month growth rates at 6.1 percent, very solid by historical measures. According to the press release from The Conference Board, Ataman Ozyildirim, its director of business cycles and growth research, said:

"The U.S. LEI increased in June, pointing to continuing solid growth in the U.S. economy.… The widespread growth in leading indicators, with the exception of housing permits, which declined once again, does not suggest any considerable growth slowdown in the short-term."

Overall, the preponderance of data support an upbeat outlook for the U.S. economy.