Lessons from Bubble #1 and Bubble #2

I believe that Bitcoin (BTC-USD) (COIN) (OTC:GBTC) has been through two primary bubbles in its eight-year price history. This is the third bubble that we're going through right now, as I wrote about previously and the charts make abundantly clear. See below. 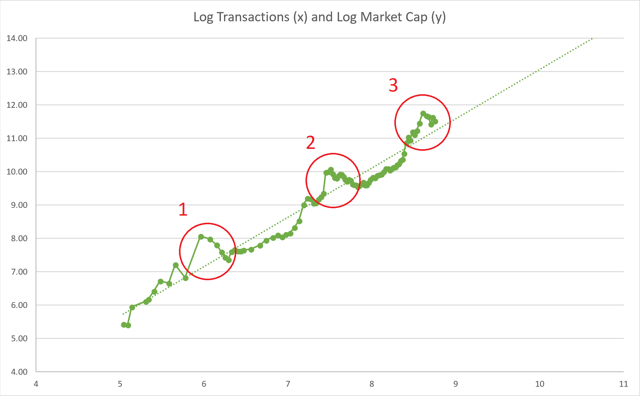 The Bitcoin bubble of 2011 - analyzing the Bitcoin network's response

Confirmed transactions and Bitcoin price in 2011

During that time, it's interesting to look at the relationship between the number of daily transactions and the price. Let's look first at the daily breakdown. 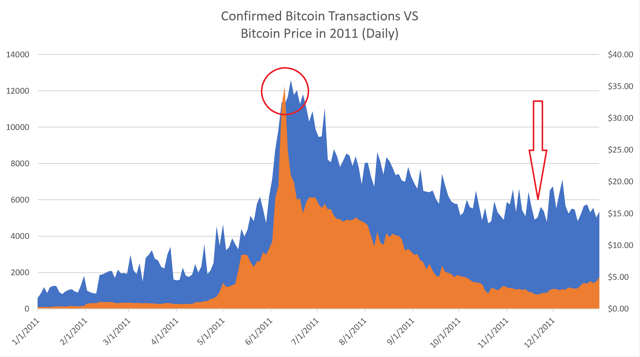 So, on a daily basis, the price seems to lead the number of transactions. However, take a look at the monthly averages view below for a slightly different story. 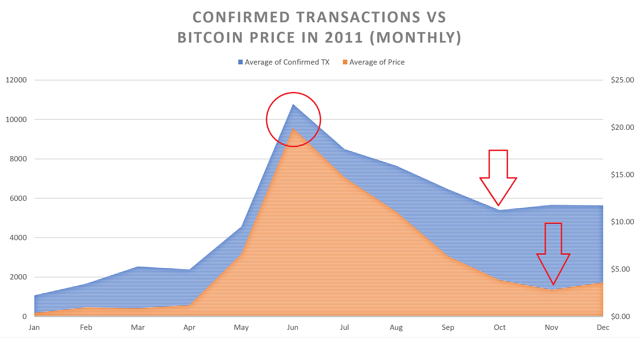 Notice that when we take the monthly average, the high points for confirmed transactions and price come in the same month. However, the low point in average confirmed transactions comes in October, while the low in average price comes in the following month. In other words, if you were to have purchased Bitcoin on a random day in November, you would have done better than purchasing on a random day in October.

I believe that picking the absolute price bottom is fraught with peril, falling daggers, and what not. But buying near the bottom may be a different story. When entering into a position, I'm sure most of you are dollar cost averaging your position. If it's possible to concentrate your DCA efforts in the month of the lowest average bottom, you're going to improve our long-term gains significantly.

Recap - Transactions and Bitcoin price in the 2011 bubble

Unique addresses and Bitcoin price in the 2011 bubble

Unique addresses give a slightly different angle on the 2011 bubble. Take a look at the chart below. 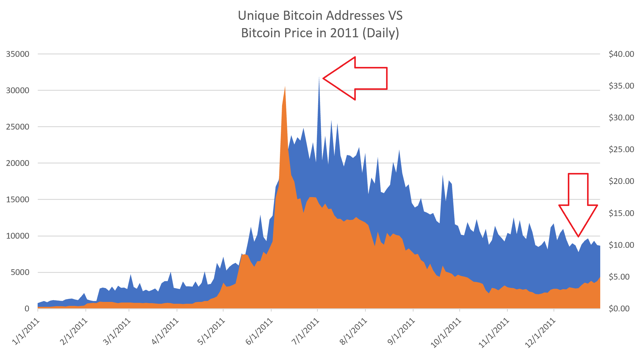 The high price in 2011 occurred on June 10th, as we discussed in the previous section. However, unlike confirmed transactions, the number of unique addresses didn't top out until July 2nd, twenty-two days later.

The low price was on November 21, but the low point in unique transactions was almost a full month later, on December 17th.

Let's look at the monthly view. 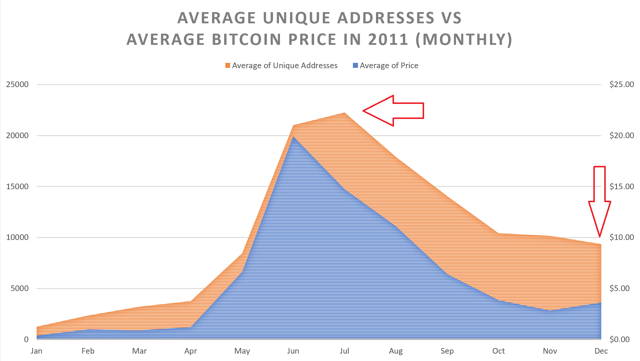 Here, we see that, on a monthly basis, unique addresses lagged the price recovery by about one month at the peak and at the bottom. This delayed reaction of the network differs from that of the transaction volume, which I think is interesting. Let's move on.

Recap - Unique addresses and Bitcoin price in the 2011 bubble

On the daily and the monthly average basis, the number of unique addresses was a lagging indicator of the 2011 bubble at both the peak and the floor. This is different from what we saw with confirmed transactions.

The Bitcoin bubble of 2013 - analyzing the Bitcoin network's response

Now, if any of you have read about or were involved with Bitcoin in 2013, you will know it was the year of the catastrophic Mt. Gox hack, which resulted in a single Bitcoin exchange being hacked that was responsible for around 80% of the exchange volume in Bitcoin.

Look at the chart below and see if you notice anything funny. 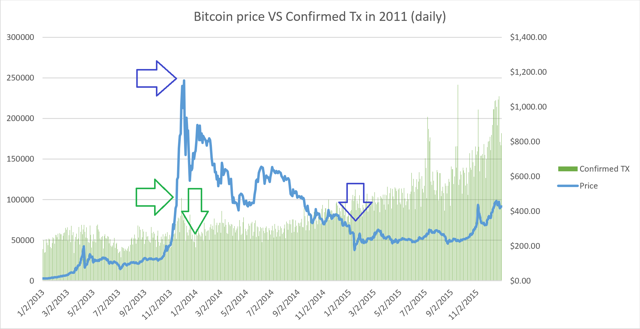 First of all, the confirmed transactions actually spiked two days before the price in this case (November 28th and 30th, respectively). The second thing to note is that the number of daily transactions bottomed out in less than two months, while the price took almost fourteen months to bottom out (January 1st of 2014 and January 14th of 2015, respectively).

By the time the price hit bottom in 2015, the number of daily transactions had gone from their bubble peak of 83k per day to 228k per day, increasing almost three-fold.

Bitcoin transactions and price in 2013 (monthly) 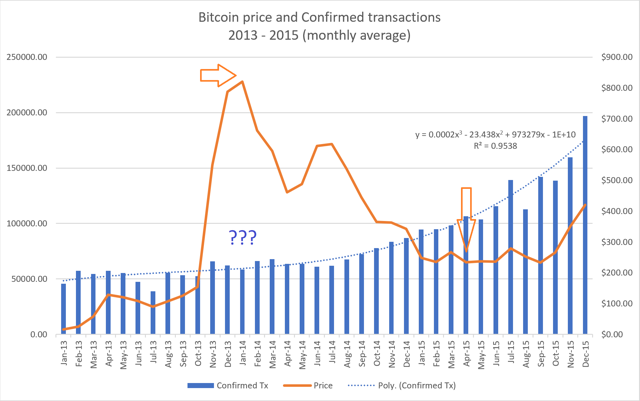 While the price took a few more months to bottom out on the monthly average (April of 2015 instead of January 2015), there was no peak or bottom to speak of in confirmed transactions on a monthly basis. The missing volume all came from trades happening inside Mt. Gox, rather than from on-chain network transactions.

Since Mt. Gox was responsible for the bulk of the exchange volume, I find it interesting that this chart really represents the behavior of the rest of the network. As you can see, they just kept chugging along as if nothing happened, attracting new users and increasing their own usage along a smooth polynomial trend line seen above. 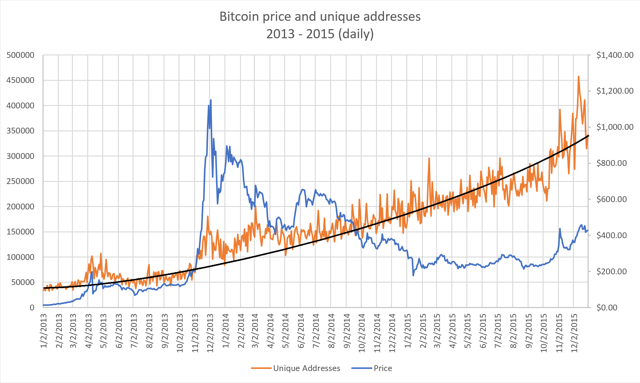 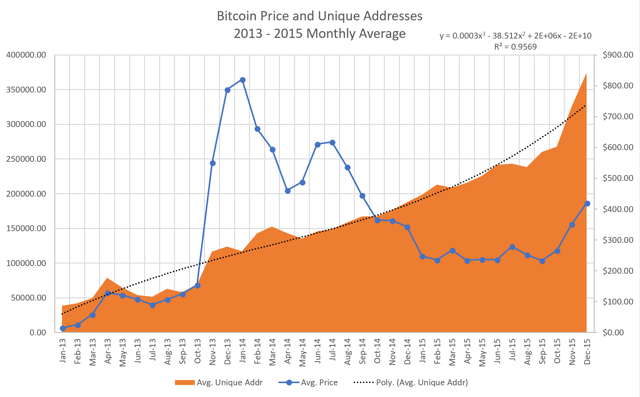 The daily and monthly charts of unique addresses look very similar for this time frame, and that makes sense. One observation that I think is important is that there seem to be short-term correlations between drops in price and the drops in unique addresses. However, unlike the 2011 bubble, the unique addresses just keep on growing through the price decline.

One reason for this was that when Mt. Gox shut down, people simply couldn't move their funds. The bitcoin locked in those addresses was essentially inaccessible and stayed that way until just recently with the recovery process and liquidation via the trustee on Kraken.

The 2011 Bitcoin bubble was driven by heavy speculation, just as in 2017. In 2017, there were many hacks and bad news in the media, but there was no event that could match the magnitude of what happened with Mt. Gox. Furthermore, the behavior of the network more closely resembles the 2011 bubble. Recall that, in 2011, the network statistics lagged the recovery briefly, but in 2013, they seemed to almost ignore the entire downturn by dipping for about a month and then just charging forward.

There are many differences between 2018 and 2011, but there are two that I think are the most important.

To illustrate what I mean, take a look at this Z-score distribution graph based on the difference between market cap and all three predictive models I discussed in the Bitcoin Value Indicator. 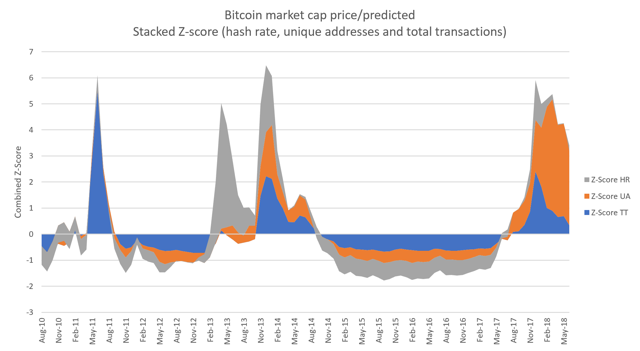 While the 2013 and 2011 bubbles did reach higher peaks than the 2017-2018 bubble, they were short-lived peaks. The bubble we're in now was not as lofty on a grand scale, but its breadth was the most massive by far. Unwinding this massively overbought market has not and will not be quick and easy.

The 2017-2018 Bitcoin bubble was the third of its kind. Prior to the launch of futures trading contracts, the speculative buying of Bitcoin reached massive proportions that have been slowly unwinding. Unlike 2013, there was no exchange that controlled 80% of trading volume getting hacked. The 2018 price correction more closely resembled the 2011 correction, based primarily on the market just being overbought and then finally a straw breaks the camel's back.

The introduction of futures contracts greatly exacerbated the amount of overbuying, as traders could enter into a huge position in the spot market, then buy a short contract, and simply liquidate their positions to double down on their ill-gotten gains.

Unless there is another event of equal or greater proportions that occurs in the next few months (like an ETF getting approved or a group of 20 countries banning Bitcoin on the same day), I expect the network statistics to stabilize and act as a leading indicator to the price bottom and eventual recovery. My best guess is that this will happen by the end of the year, or possibly this fall if we're lucky (please remember this is not financial advice, it's just a guess based on what's happened in the past and my limited understanding of the Bitcoin network).

Hans Hauge
2.54K Followers
I started my career as a factory manager and then switched over to software. Along the way I got a BS in IT, an MBA, and discovered Bitcoin. I started a couple small companies and wrote a few articles about cryptocurrency. Eventually I became the opinion leader on Seeking Alpha for the Bitcoin/Crypto. Currently heading up quantitative strategy at Ikigai.