Despite an improvement in returns from the first quarter, sentiment around natural resource equities was mixed in the second quarter as it has been through most of the first half of the year. Potential for an international trade war cast a pall on the outlook for sustained global growth while the disparity in performance of natural resource equities and their corresponding commodities has continued to fuel, to some degree, a lack of investment interest in the space.

Within the energy sector, concern, bordering on hysteria, around pipeline takeaway capacity in the Permian Basin of west Texas reached new heights. In particular, the market became highly skeptical of whether large operators, with potentially limited capacity to store or transport their own oil and gas out of the region, would be able to grow production at expected rates in the near term and whether the current level of drilling and service activity supporting this production growth is actually sustainable or warranted.

Contrasting concerns over production in the U.S., OPEC's announcement of increases in their self-imposed production quotas underwhelmed most market participants. Depending on the source quoted, "OPEC+" (OPEC plus Russia and other partners) would be bringing on an additional 500,000 to 1 million barrels per day of production by the end of 2018 in an effort to help maintain a relatively balanced and supportive oil market.

However, potential declines in production from Iran, Libya, and Venezuela, combined, appear to be on the magnitude of at least 1 million barrels per day, suggesting that, globally, we could still be operating in a deficit in the near future. This tightening market has manifested itself in shrinking crude inventories - a key measure monitored by OPEC and most other major oil market participants. OECD inventories ended May below the five-year average, and Cushing WTI stocks have continued exceptional draws and are nearly 50% below five-year levels. 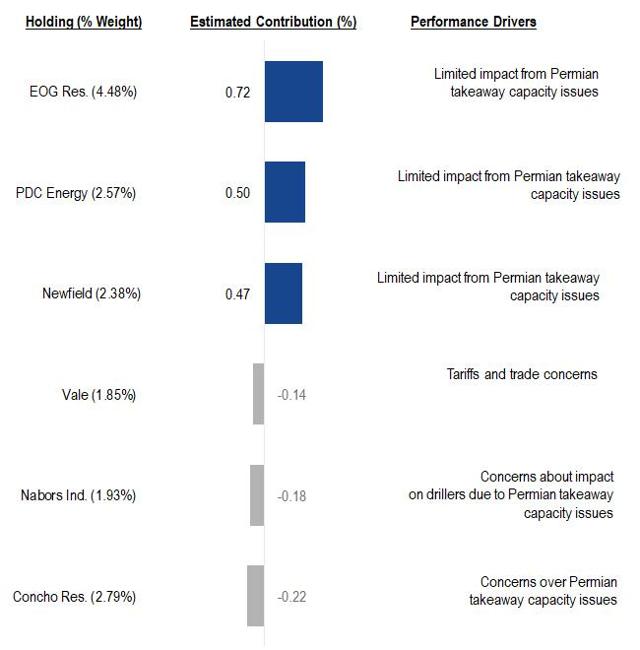 Source: FactSet; VanEck. Data as of June 30, 2018. Contribution figures are gross of fees, non-transaction based and therefore estimates only. Figures may not correspond with published performance information based on NAV per share. Past performance is not indicative of future results. Portfolio holdings may change over time. These are not recommendations to buy or sell any security.

Within the mining sector, despite reaching the highest prices of the year in early June, copper sold off towards the end of the month, although it still ended the quarter above 2017 average levels. Zinc fared worse with a steady decline throughout the period. The sell-off for many metals came amid fears that recently enacted tariff policies would impact demand. For the most part, diversified mining companies followed suit. Gold and gold mining companies were also caught up in the sell-off though were impacted, rather, by a strengthening U.S. dollar.

Predicting the market's reaction to daily headline news regarding what we view as generally minor shifts in the natural resource equity or commodity landscape has become exhausting if not nearly impossible to do at this point. Why the market continues to see such inconsistent interest in the space remains puzzling. The most logical explanation seems to be that the bear markets of 2015 and 2017 are far too immediate in the minds of investors who are over-anxious and looking to avoid being "bitten" again in 2018.

As regularly noted in our quarterly commentaries, one of the main pillars of our investment philosophy is to look for long-term growth opportunities and position our portfolio for the future rather than just react to current market circumstances. Over time, this approach should help us identify companies that are most likely to sustain net asset value independent of commodity price volatility.

To that extent, our focus has not shifted from where we continue to see the most opportunity in the space. We still believe that the energy and mining companies that we invest in are virtually in the best fundamental shape that they have seen in years with supportive growth outlooks and commodity pricing, strong balance sheets with increasing free cash flow, and propensities to return capital to shareholders.

Speaking in more specific terms, U.S. unconventional oil companies with low-cost operations, including those in the Permian, remain particularly attractive to us. We favor these companies most notably for the reasons mentioned above, but also because we believe concerns about such things as takeaway capacity are overblown and ignore the potential significant draw on inventories that may be required if the world looks to the U.S. to help fill the "supply gap" amidst strengthening global demand.

Within the mining sector, despite fears of an international trade war, Chinese demand for diversified metals appears insatiable. The absence of new mining projects and the continuing deterioration of ore grades, particularly in copper, have underscored the need for more additional investment in the space.

Finally, while perhaps too early to tell, thus far we have seen little evidence that tariffs are actually causing economic damage and, consequently, are enough of a reason to discount any type of future positive global growth. Within the U.S. and Europe, we still see positive, though moderated, economic growth prospects. Emerging markets' economies appear, in general, weaker. However, Asian economies have been okay, as have those of both China and Eastern European countries.

All company, sector, and sub-industry weightings as of June 30, 2018 unless otherwise noted.

All indices listed are unmanaged indices and include the reinvestment of dividends, but do not reflect the payment of transaction costs, advisory fees or expenses that are associated with an investment in the Fund. Certain indices may take into account withholding taxes. An index's performance is not illustrative of the Fund's performance. Indices are not securities in which investments can be made.

Please note that the information herein represents the opinion of the author, but not necessarily those of VanEck, and this opinion may change at any time and from time to time. Non-VanEck proprietary information contained herein has been obtained from sources believed to be reliable, but not guaranteed. Not intended to be a forecast of future events, a guarantee of future results or investment advice. Historical performance is not indicative of future results. Current data may differ from data quoted. Any graphs shown herein are for illustrative purposes only. No part of this material may be reproduced in any form, or referred to in any other publication, without express written permission of VanEck.

You can lose money by investing in the Fund. Any investment in the Fund should be part of an overall investment program, not a complete program. The Fund is subject to risks associated with concentrating its investments in Canadian issuers, commodities and commodity-linked derivatives, commodities and commodity-linked derivatives tax, derivatives, direct investments, emerging market securities, foreign currency transactions, foreign securities, other investment companies, management, market, operational, small- and medium-capitalization companies and hard assets sectors risks, including, precious metals and natural resources, that can be significantly affected by events relating to these industries, including international political and economic developments, inflation, and other factors. The Fund's portfolio securities may experience substantial price fluctuations as a result of these factors, and may move independently of the trends of industrialized companies. The Fund's investments in foreign securities involve risks related to adverse political and economic developments unique to a country or a region, currency fluctuations or controls, and the possibility of arbitrary action by foreign governments, including the takeover of property without adequate compensation or imposition of prohibitive taxation.

Follow VanEck and get email alerts
+
Add a comment
Disagree with this article? Submit your own.
To report a factual error in this article, click here.
Your feedback matters to us!