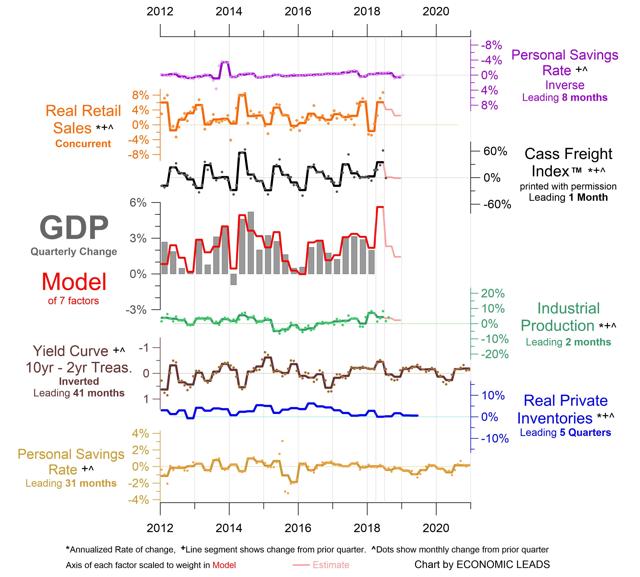 The Model attempts to find the combination of seven indicators or influences that work together to best predict quarterly GDP. It estimates the relationship of quarterly GDP growth with the quarterly change of these seven factors over rolling eleven year periods. The lead time of the factor giving the model the highest correlation with GDP is selected (this may be different than the lead time at which a given factor has the strongest correlation with GDP). As time moves on factors may come or go from the model. Since Q1 the price of oil, the S&P 500 and the real 10-year Treasury yield were dropped from the model.

Oil price spikes previously had a strong correlation with weak GDP about 21 months later. The price spike lining up with Q1 2018 GDP contributed to the previous version of the model estimating 0% growth for Q1. This big miss lead to oil falling outside the parameters to be in the model.

When the personal savings rate leading 31 months replaced the price of oil in the model predictive ability of the S&P 500 declined. The kicker was that the S&P 500 now had a very different correlation in the first half of the 11 years used in the model than in the second half. It actually flipped from a positive in the first part to a negative correlation in the second part.

The personal savings rate with a 8 month lead replaced the S&P500. When the savings rate goes down this tends to mean GDP grows stronger about 8 months later and weaker about 31 months later.

After both lead times for the savings rate were brought into the model the real 10-year Treasury yield had almost no predictive influence in the model. We experimented with the yield curve which had not worked well in previous versions of the model but appears to work well in this one.The current version of the model has a stronger correlation with quarterly GDP than any previous model we have constructed, but it is too soon to know if this is a sound model or the result of over fitting the data.

Personal Savings Rate Inverted (purple line and dots, leading 8 months) A reduction in savings, which means more is spent on consumption, corresponds with a stronger economy about 7 or 8 months later. So this is an inverted or negative relationship.

The Fred Chart shows the personal savings rate our indicator looks at the change between an average of 3 months from the average of the 3 months prior to that.

Real retail sales (Orange Line concurrent) grew at a 6.1% annual pace in Q2. It’s the fastest pace in four years. Retail sales is the heaviest weighted indicator in the current version of the model. For purposes of estimating Q3 and Q4 we guess that monthly real sales will grow at an annual rate of 2.5% which is the best fit growth rate for the last eight and a half years.

Cass Freight index TM From Cass Information Systems, Inc. (Black line and dots, Leading 2 months) Shipments corresponding with Q2 GDP grew at an annual rate of 34%. This series is not seasonally adjusted. This was the fastest since Q2 2014. The other quarters will pull the average for the year down substantially. Guesses for the data point used to estimate GDP for Q3 and Q4 are based on the average seasonal change of the previous five years.

The last 9 years has a best fit growth rate of 1.6%. The models prediction for Q3 and Q4 are based on monthly industrial production growing at a 1.6% annual rate from the month before. The Fred chart shows the history.Yield Curve 10-Year – 2-year Treasury Yield (brown line and dots, leading 41 months) The yield is often portrayed as the difference between two yields. The Fred chart shows the 10 year Treasury yield minus the 2 year.

It has been trending down since 2010 and is at the lowest level since 2007. Measured this way the yield curve has a positive correlation with GDP growth and leads about 20 to 25 months. So the last few months shown on the chart above suggest GDP will be weak in early 2020.

The yield curve difference indicates a surge of growth in Q2 followed by weakness in Q3 and Q4. It suggests growth will rebound in 2019 and weaken in 2020.

Real private inventory (blue line, leading 5 quarters) suggest modest weakness for some for Q2 and Q3, but a bit faster growth in Q4.

Personal Savings Rate (Gold line and dots, leading 31 months) Quarterly growth tends to weaken about 31 months after personal savings weaken. Having a low savings rate hinders growth sustainability. This indicator has no big implications for the rest of 2018, but suggests weakness in early 2019 and early 2020.

Q1 2018 Recap: GDP grew at 2% while this was revised down from previous estimates it is nowhere close to the 0.1% we predicted three months ago. Did I mention we made big changes to the model?

In Q1 our estimate was far below other estimates. Now we find ourselves in the uncomfortable position of having a Q2 estimate far above others. Whether Q2 comes in at 5.6% and is the best quarter of the expansion or at 4.1% and is the fourth best quarter there will be many (particularly Trump supporters) who will want to believe sustainable strong growth has arrived. Chances are weaker growth follows. The Model's estimates for Q3 and Q4 are 2.3% and 1.4% respectively.

The current expansion is 108 months old and became the second longest in June. We expect it will last till 2020. The two indicators in the model that look out to 2020 suggest weakness beginning in Q1 2020. The yield curve shown in the Fred Chart above suggests the growth rate trends down into at least early 2020.

The factors in our model suggest the current expansion has a good shot at becoming the longest in history.

The economic expansion likely continues. The stock market (NYSEARCA:SPY) should return to making new highs. After the hoopla of a strong second quarter we expect GDP growth to resume its well below average pace as it has done the last 28 year. From 1990 to now GDP has grown at 2.4% versus 3.5% in the previous 50 years. Meanwhile stocks after inflation and dividends have trended higher at an above average pace.

I believe the last 28 years has created a massive bubble where business revenue that could have been used to continue growing the economy at above 3% were instead used to bid up asset prices and for higher consumption. I expect this bubble will build for perhaps another year and that it will take the recessions of two or more business cycles to fully deflate the bubble.

John Early
1.52K Followers
Have managed money for clients as an independent advisor since 1991. Published a newsletter ECONOMIC LEADS from 1988 to 1993. Have an economics degree from Vanderbilt University. Focus on the macro picture forecasting the US economy and broad stock market. Also have a model to estimate long term equity returns for several countries.
Follow

Additional disclosure: There is no guarantee analysis of historical data their trends and correlations enable accurate forecasts. The data presented is from sources believed to be reliable, but its accuracy cannot be guaranteed. Past performance does not indicate future results. This is not a recommendation to buy or sell specific securities. This is not an offer to manage money.