Italy is one of the biggest economies in the world, with many of the world’s leading companies headquartered there (think about all these luxury cars!). Well, it should not be surprising, as Italy is a country with long capitalist traditions – it was there that the first European banks were established. However, it has been recently struggling with numerous problems, speaking euphemistically. As one can see in the chart below, the country’s economic growth has disappointed for years – even against the background of the Eurozone, which is definitely not the champion of growth. Actually, unlike most of Europe, Italy’s real GDP still remains well below its 2007 pre-crisis peak. Only Greece has suffered a more prolonged economic depression. 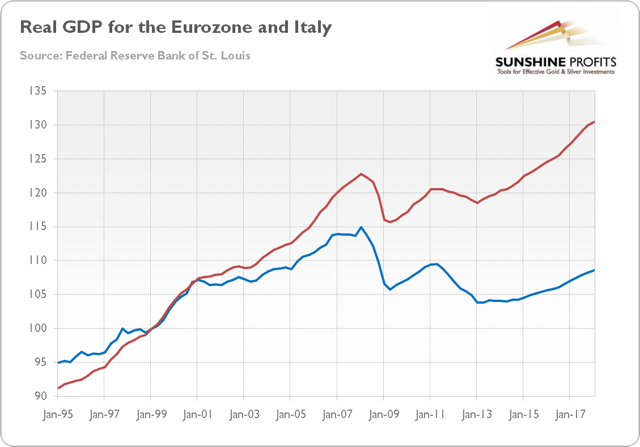 What are the reasons of this stagnation? Well, one can simply blame, of course, the EU and the euro, but the truth is that Italy faces serious structural problems. The demographics is unfavorable, while the governance is weak. The public sector is corrupted and inefficient. The poor enforcement of property rights, dysfunctional legal system, complicated taxes and bureaucratic regulations hurt the competitiveness of Italian companies. In the Economic Freedom Index of the Heritage Foundation, Italy has been a laggard. In 2018, its ranking was 79th - only Greece was lower within the Eurozone countries. And in the latest World Bank Doing Business Index, Italy was 46th (from Eurozone countries above Belgium, Cyprus, Greece, Luxembourg and Malta only).

Another weakness of Italy’s economy is unsound fiscal policy. As the next chart shows, the Italian government maintains a chronic budget deficit, regularly exceeding the Eurozone’s threshold of a three-percent deficit. In turn, the country’s public finances were unprepared for the Great Recession – and the public debt soared from 100 in 2007 to above 130 currently. 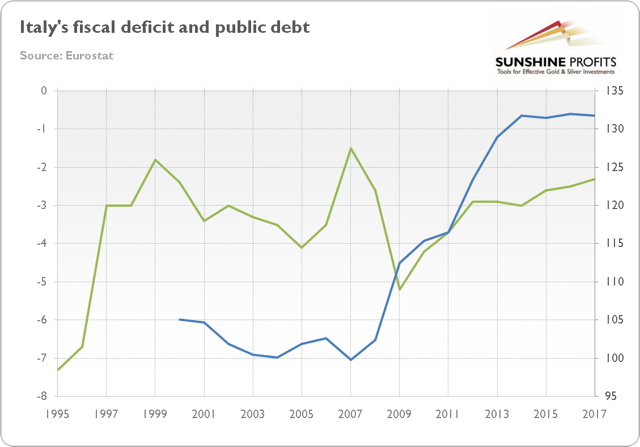 Since 2009, the fiscal deficit has been reduced, as the Italian government began to consolidate public finances. However, the consolidation took mainly the form of increasing the tax burden, which pushed Italy into another recession in 2012. Italian governments (especially Monti’s and Renzi’s cabinets) have been also trying to implement structural reforms. Their implementation is, however, hampered by the unstable political situation on the Apennine Peninsula.

The formation of the new populist government will not improve the situation. Why? Well, the coalition between MP5 and League may be not stable. But what is more important is that the MP5/League agenda does not address structural problems (with the exception of the pledge to tackle corruption), but focuses on stimulating demand and redistribution of income. The government openly questions the benefits of Eurozone membership and blames the EU’s Stability and Growth Pact for Italy’s domestic problems, although all Eurozone countries are subject to the same rules and the others grow faster. Such hostile approach, not to mention that idea to write down Italy’s sovereign debt, may lead to a Greek-style confrontation with the EU. It would make the yields on Italian bonds soar and would deteriorate the government’s fiscal space and the state of domestic commercial banks, which hold a lot of government debt. It would further hamper the economic growth and intensify the deposit flight.

What does it all mean for the gold market? Well, the political instability in Italy and the lack of further economic reforms will leave the country vulnerable to future negative economic shocks. Hence, we could see more turbulence on the Apennine Peninsula, which would hurt the euro against the U.S. dollar and put gold under downward pressure. Investors have to remember that Italy is about ten times the size of Greece, so its default would blow up the Eurozone.

However, the recent Italian turmoil has moderately affected the rest of Europe. It implies that investors have so far concluded that the new government in Rome would not endanger the euro. The stagnation may continue in Italy, especially if the populists refuse to accept the harsh economic reality and the fundamental principles of sound budgeting, but the euro will survive. It means diminished safe-haven demand for gold but also the lack of downward pressure stemming from the falling EUR/USD exchange rate. The conclusion is that the Italian perturbations should have limited impact on the gold market overall. At least in the near future. But the summer will probably be worse.

On the surface, the public debt has stabilized, but we should add the central bank’s debts. The chart below paints Target2 balances of Greece, Italy and Germany. A positive Target2 balance reflects a net claim vis-à-vis the ECB and a negative balance corresponds to a net liability. Thus, the chart clearly shows that Italy’s total deficit has been growing in the recent years (and is even bigger than Greece’s), which may signal capital flight from Italy. 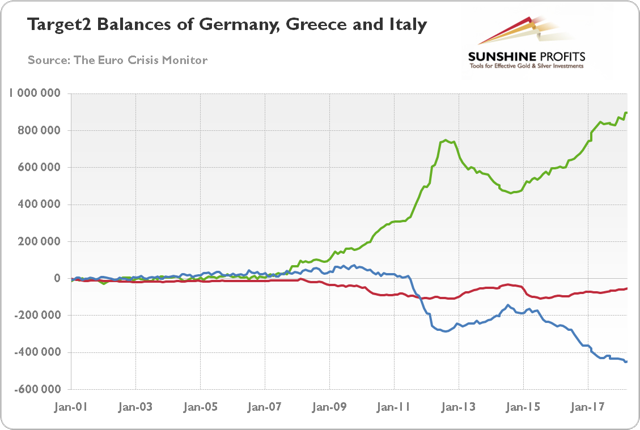 Surely, it may just partially reflect the ECB’s asset purchase program (Italy has been among the biggest beneficiaries of the program), but it does show a certain level of stress in the Italian financial market. And no wonder: on top of weak banking sector and poor fiscal policy, a coalition of anti-system and anti-European political forces, with no healthy growth agenda addressing structural economic weakness, have come to power in a founding member of the EU for the first time in history. It suggests that the recent crisis on the Apennine Peninsula is unlikely to be a one-off event.