The most valuable skill an investor can acquire is the ability to distinguish theory from law. Examples of theory include forecasts, the relationship between gold and inflation, or anything ever written by an economist. Examples of law include principles of diversification, statistical arbitrage, and mostly the fact that anything good that ever gets posted online is done on those nights you’ve promised your girlfriend a nice dinner out and your full attention.

Michael Batnick, Director of Research at Ritholtz Wealth Management, posted a fantastic chart online recently, and my phone lit up like a Disney fireworks show.

Phil: “Sorry, we’ve got to get home earlier than expected”

V: “Ok, sure, it must be something important”

Phil: “I have to tweet and blog about company weights within the S&P 500”

Here is the chart that Mike posted: 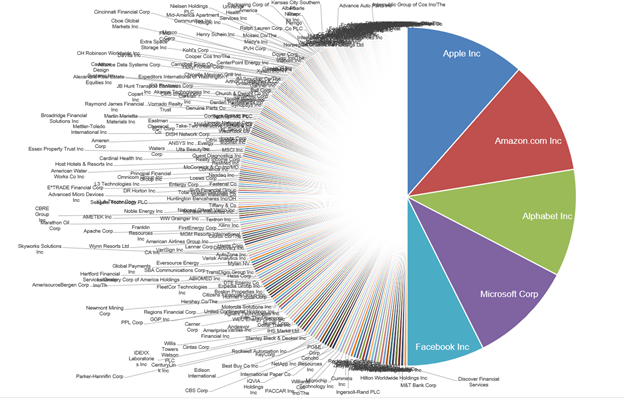 The chart shows the relative weights of the top five companies in the S&P 500, alongside the bottom 282 on the left-hand side. Some have quibbled that the chart doesn’t show the middle 213 stocks, which is a fair point, but that was fully disclosed and anyway not related to what Mike was showing. The key point here is that investors in a market cap-weighted S&P 500 index fund have as much exposure to just five companies as they do to the smaller 282 companies combined.

The graphic struck a chord and went viral, as it should have. It had a specific relevance to me, since we launched the Reverse Cap Weighted U.S. Large Cap Index (Index ticker: Reverse), which allocates to the exact same stocks as any traditional S&P 500 fund, but the exact opposite concept. In a reverse strategy, those five Goliaths are the smallest-weighted companies.

There are three key reasons why we launched the reverse strategy. The first is that by weighting smallest-to-largest, Reverse captures the size premium, or “small minus big” within large cap. By keeping the size bet in the large-cap space, we believe that the quality, liquidity and valuation issues that have called the size premium into question are largely solved.

The second reason is that when we rebalance reverse, we take profits from the winners and reallocate that money to the stocks with the most room to run. It is a systematic buy-low-sell-high process that contributes outperformance in all but extreme-momentum cycles.

And the third, the one that I want to focus on here, is that a reverse index can be used as a tool alongside a market cap-weighted S&P 500 index fund to flatten the distribution of the stocks. It is for this reason that Mike’s graphic was sent to me by a dozen clients, friends, and coworkers. We have been trying to highlight the concentration risk in market cap-weighted funds for a long time - something Mike just did in a powerful way.

I recently posted a gif image here on Twitter showing how adding a reverse strategy alongside an allocation to the S&P can drastically reduce portfolio concentration. As gif images aren’t supported everywhere, I'll use a couple of the source graphs below. Along the vertical axis are the company weights, and horizontal are the companies, largest to smallest as left to right. The SPX (the S&P 500 index) and Reverse index relative weights are labeled on top. HHI stands for the Herfindahl-Hirschman index, a measure of index concentration calculated by squaring the weights of each constituent and then summing up the resulting numbers. The lower the HHI, the better the diversification. 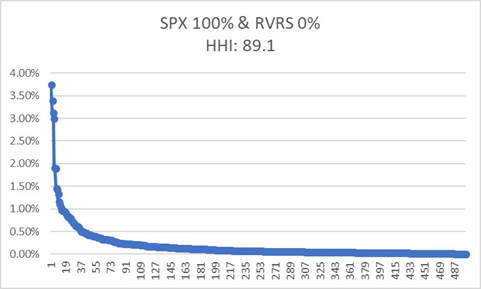 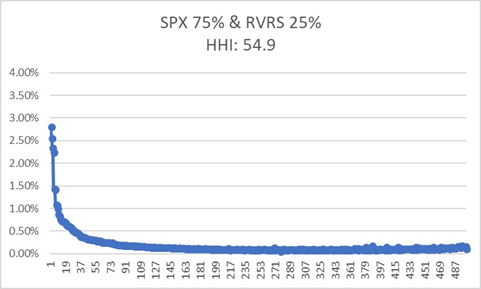 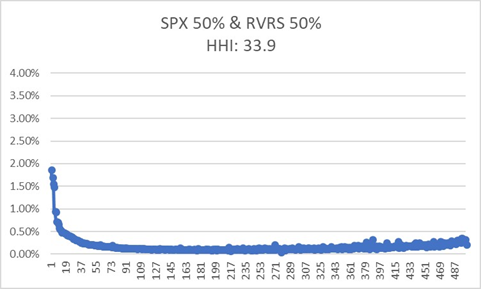 If you look at the left-hand side of the top slide (100% SPX), you can see those same outliers - Apple (AAPL), Amazon (AMZN), Alphabet (GOOG, GOOGL), Microsoft (MSFT) and Facebook (FB). When you get down to a 50:50 split between the two indices, those weights are just about cut in half - still overly represented, but in a way that drops HHI all the way from 89.1 to 33.9.

HHI can be further maximized by investing in an equal-weight portfolio - mathematically the most diverse allocation to an index - but the 50:50 SPX and Reverse index strategy has a slightly different return profile. The higher allocations to the largest companies reduce mapping error, while the higher allocation to the smaller tail provides increased SMB exposure for your buck. Ultimately, any recommendation of an optimized portfolio would have to be client-specific.

Here is an illustrative look at combo weights versus cap weighting and equal weighting: 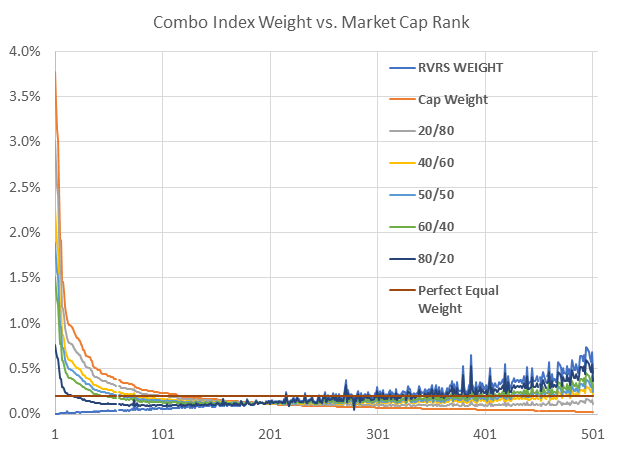 As noted by many online and in Mike’s subsequent blog post, the concentration of the top holdings in SPX that we are seeing now is not a particularly unusual phenomenon; it has been this way, more or less, for some time. And just as Mark McGwire’s steroid use was a violation of the public trust, yet Andy Pettitte’s steroid use was evidence of his competitive spirit, the outrage meter on SPX concentration can vary wildly.

If you take a look at the historical annual HHI index for the S&P 500, the current score of 89.1 is not all that bad: 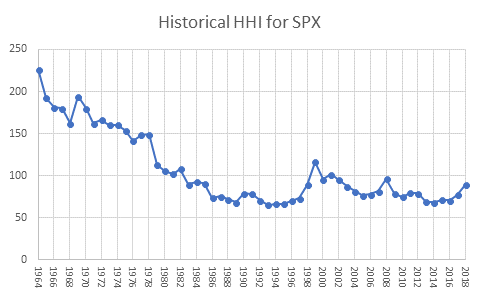 On a rolling basis, we come to a fairly similar conclusion: 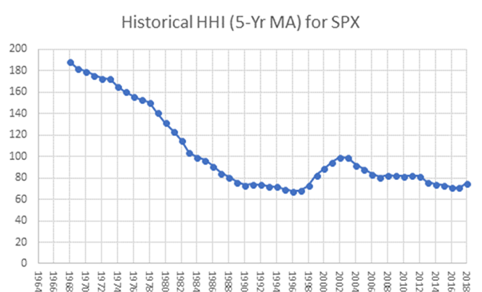 What is fairly unusual is the similar risk profile of these top companies. We have rarely seen such sector concentration in the top holdings before (the last S&P sector to exceed the current weight of Info Tech... was Info Tech just before the .com bubble burst in 2000), and these companies, in particular, share some specific risk attributes. Alphabet just got hit with a $5 billion fine from the EU. Microsoft has faced anti-trust lawsuits over the years. Facebook has had numerous regulatory violations and also has anti-trust risks. Amazon is a stated target of the current administration. All of these companies are depending on expansion into emerging markets to continue their growth, and all face similar obstacles for achieving that - risks that are forward-looking, not backward-looking.

Also worth noting is that while the “top 5 weight %” is a constant, the companies that comprise that top five change frequently. Jason Zweig pointed out in the Wall Street Journal, “Of course, history also suggests that every firm that was expected to dominate indefinitely - from RCA in the 1920s to IBM in the 1980s to Nokia in the 1990s - has ended up slipping. And the idea of virtually limitless growth flies in the face of much of human experience. Trees can’t grow to the sky because they would be bent and crushed under their own weight first.”

At the end of the day, concentration itself may or may not be a bad thing for investors, just as being overly exposed to a handful of stocks could turn out wonderfully for investors or it can go the other way. My crystal ball is no better than anyone else’s. I am just glad to see these issues rising to the forefront of the conversation, and that investors are becoming aware of the risks they are taking on when they invest in market cap-weighted funds.

As Aaron Brown noted recently: “the downside is that market-cap weightings leave you overexposed to overvalued companies, and underexposed to undervalued ones... Inverse-cap gives even better factor exposures and has outperformed significantly since 1997, but who knows what the next 20 years will bring?”

Josh Blechman
176 Followers
After graduating from the University of Michigan, I joined Exponential ETFs, originally a Hedge Fund and now an ETF issuer run by Professor Claes Fornell (Donald C. Cook Distinguished Professor Emeritus of Business Administration and the University of Michigan Ross School of Business). Dr. Fornell has devoted his lifes work to the study of customer satisfaction and developed an investment thesis around being able to quantify that intangible asset, in order to take advantage of the enhanced cash flows enjoyed by companies who have satisfied customers. We recently launched an ETF (Ticker: ACSI) based on the same underlying investment thesis. We also offer the Reverse Cap Weighted US Large Cap ETF (Ticker: RVRS), which flips the S&P 500 on its head to take advantage of the small-minus-big "size factor" and provide exposure to an underrepresented segment of US Large Cap. I received an MBA with a specialization in Finance and Real Estate from the NYU Stern School of Business and my current position is Managing Director at Exponential ETFs.
Follow

Additional disclosure: The Reverse Cap Weighted U.S. Large Cap Index (Reverse) is a rules-based reverse capitalization weighted index comprised of the 500 leading U.S.-listed companies as measured by their free-float market capitalization contained within the S&P 500 universe. The Index has an inception date of October 23, 2017, with a back tested time-series inception date of December 31, 1996.

Past performance of an index is not a guarantee of future results, which may vary. The value of investments may go down as well as up and potential investors may not get back the amount originally invested. Performance figures contained herein are contain both hypothetical and live returns; results, hypothetical or otherwise, are intended for illustrative purposes only. Index performance returns do not reflect any management fees, transaction costs, or expenses, which would reduce returns. Inclusion of a security within an index is not a recommendation by to buy, sell, or hold such security, nor is it considered to be investment advice. It is not possible to invest directly in an index.

The Index, strategy, and performance returns discussed are for informational purposes only and do not represent an offer to buy or sell a security and should not be construed as such.