Here is a summary of the results I will describe in this report.

Since my last report on the Eagle Ford shale group, there have been no material events or operational changes to the companies in the group.

I continue to maintain a long position in PVAC. 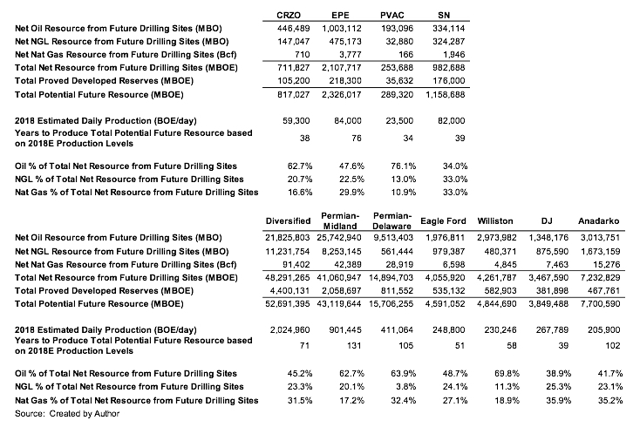 There are no material changes from my prior report to the information in the above table.

By changing my assumption for NGL prices, all companies’ D&C Costs per Adjusted BOE were slightly impacted. Otherwise there were no material changes to the above information since my last report.

Chart 3 below shows EBITDA excluding hedging per BOE for each company and the various geographies for the past four historical quarters and my 2018 full year estimate. 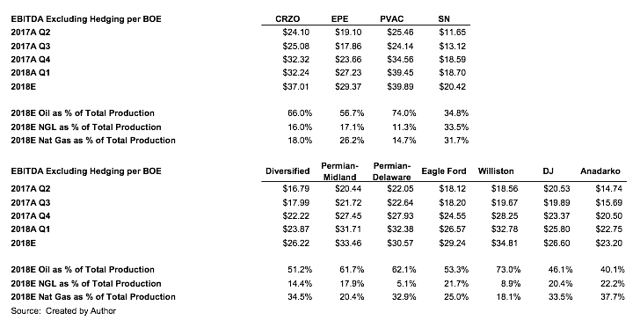 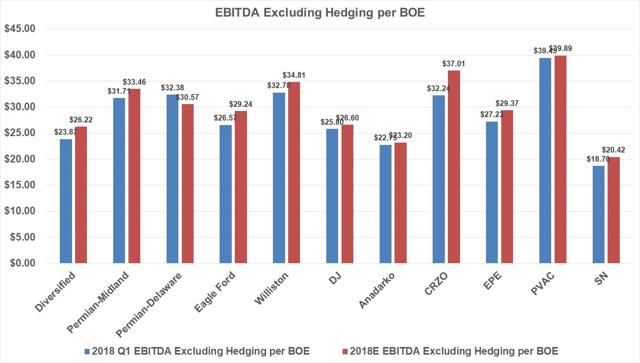 Chart 4 below shows (1) the price discount or premium to WTI at which basis hedges, if any, are struck, (2) the % of Permian production with basis hedges and (3) the Permian price discount or premium at which oil is forecast to be sold in 2018 relative to WTI at Cushing taking into account basis hedges. Also, if an E&P has firm transportation agreements out of the Permian such that they will receive WTI at Cushing or gulf coast pricing, the below numbers take this into account.

Due to the changes in basis differentials, assumed NGL pricing and any other changes to 2018 production or expenses, 2018 estimated EBITDA per BOE changed as follows compared to the prior report: CRZO +$1.08, EPE -$0.83, PVAC -$0.16 and SN -$2.21. Due to SN’s high weighting to NGL production, they were impacted strongly by my change in NGL pricing assumption.

Chart 5 below shows the equity value and enterprise value for each E&P and various geographies. 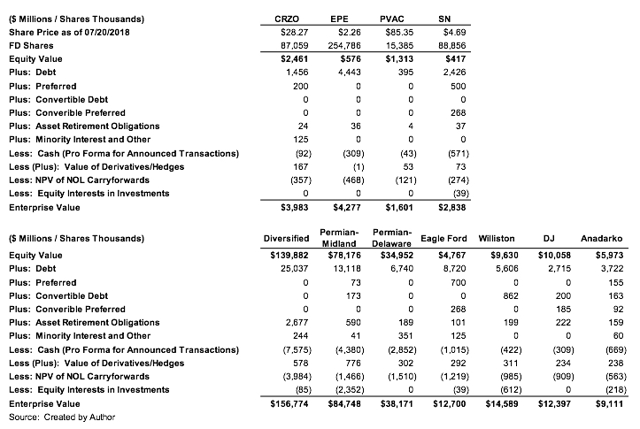 Chart 6 below shows the two calculations to value future drilling sites for each E&P and the various geographies.

Of the two analyses, I place more weight on EV Less PV-10 since the reservoir engineers calculating PV-10 have significantly more detailed information than I do. There are no material changes since my last report other than the changes in stock prices and resulting impact on valuation ratios.

Chart 7 provides the production growth rate assumptions for the E&Ps and various geographies.

There are no material changes since the last report.

Since the last report, Unlevered DCF analysis implied stock prices changed as follows: CRZO -15%, EPE -100%, PVAC -2% and SN -100%. The declines are due primarily to decreasing expected future NGL prices. As a result, EPE and SN are now estimated to have no equity value on a DCF basis. In summary, based on DCF analysis, PVAC is fairly valued, CRZO is overvalued and EPE and SN are worthless.

Chart 9 provides leverage and free cash flow metrics for the E&Ps and the various geographies.

Chart 11 provides price realizations by commodity during 2018 Q1 for the group.

NGL price realizations for the group are weak, with discounts to benchmark OGIS prices ranging from $8.00 for CRZO at the low end to $12.93 for PVAC at the high end.

Since my last report, there have not been any material changes to my views on the Eagle Ford shale group. They benefit from superior oil pricing given their proximity to the gulf coast. But, since my last report, the market has priced in this fact and share prices have increased materially. I continue to maintain a long position in PVAC given its superior profitability and high oil production weighting, despite the 81% return since my last report. CRZO is no longer under-valued but instead is now about fairly valued. EPE and SN are close to worthless. SN suffers from a low weighting to oil production. And, SN’s high exposure to NGLs is problematic as I have reduced my long-term NGL pricing assumptions. EPE’s oil and NGL weightings are better than SN’s but are still only around 48% for oil and 22% for NGLs. SN and EPE have large asset bases and if oil prices were to make a large move upward, they have high leverage to oil prices. I would not necessarily short SN and EPE, but I don’t see any compelling reason to own them.

Andre Kovensky
366 Followers
Andre Kovensky is the founder and President of Octavia Investments LLC. Previously, he was the COO and CFO of PGM Holdings (TSE:2466), a publicly traded owner and operator of golf courses in Japan. He also spent three years leading corporate buyouts for Lone Star Funds in Tokyo, as well as 10 years as an investment banker, the majority of which with Citigroup based in the San Francisco Bay Area focused on technology companies. Andre received his MBA from UCLA's Anderson School of Management and a BA in the Humanities from the University of Texas at Austin.
Follow

Disclosure: I am/we are long PVAC. I wrote this article myself, and it expresses my own opinions. I am not receiving compensation for it (other than from Seeking Alpha). I have no business relationship with any company whose stock is mentioned in this article.