A Bear Market In The Works?

Next month, we will see the longest bull market in the S&P 500 since World War II. But, within two years, we could also see a bear market, as implied by major market participants, the yield curve, and interest rate futures markets. A bear market is commonly defined as a 20% drop in the closing price of an equity index from the top of a down cycle. The last bear market dropped 57% between 2007 and 2009.

As the next bear crawls closer, one predicament is clear: it's already too late to be in stocks given how fast they drop during a bear scare, yet too late to be in bonds this time given the global debt glut. One solution could be currencies, which often trend as monetary policy rushes in, either to arrest an overheating economy before a bear market or to break up an impending recession during a bear market. In particular, the US dollar (USD) tends to dictate the value of other currencies and emerging markets (EM) at large, just as the S&P 500 typically dominates other equity indices and global risk appetite. 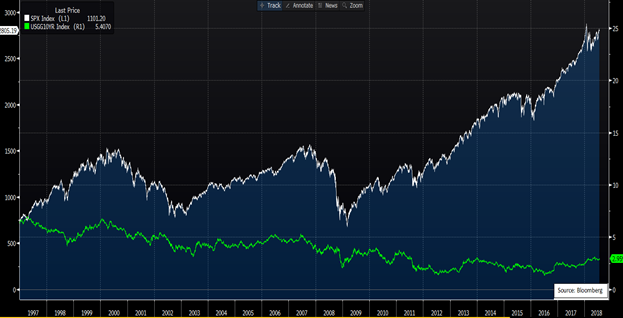 How Do We Track The US Dollar?

Before forming a USD view, let's understand the instrument that helps to express that view - the highly tradable USD Index, which contains 58% euro (EUR), followed by 14% yen (JPY). Other currencies (British pound, Canadian dollar, Swiss franc, Sweden krona) make up the remaining 28% and tend to move alongside the EUR.

Before examining the EUR in more detail, let's briefly touch on the JPY. The JPY is a global funding currency because Japan has the second largest sovereign bond market in the world and has had a perennially low interest rate environment for the last two decades. When risky markets tank, JPY typically appreciates because investors have less incentive to borrow it to fund other higher yielding instruments. Consequently, if both the EUR and JPY appreciate during the next bear market, then the entire USD index will undoubtedly go down.

Where Will The US Dollar Go?

The Federal Reserve (Fed) ended Quantitative Easing (QE) in 2014 and started raising its policy rate in 2015. In contrast, the European Central Bank (ECB) announced that it will not end QE until end of 2018 and will keep its policy rate unchanged through the summer of 2019. This four-year lag is not surprising as the Fed reached near zero on its policy rate four years ahead of the ECB.

To understand where the USD index will likely go next, two key questions remain. First, was it odd that the ECB raised rates in 2011, even after the onset of the European sovereign debt crisis in 2010? And second, would it be odd for the EUR to appreciate relative to the USD before ECB's first hike? Such a dynamic happened during the 18-month period preceding December 2015 - the start of the current Fed rate hike cycle, where the USD index appreciated almost 25%.

Why Did The ECB Diverge From The Fed?

ECB's inflation target of "below but close to 2%" on Harmonic Index of Consumer Prices (HICP) is lower than the Fed's target of "symmetric 2%" on the Personal Consumption Expenditures (PCE) Index, owing to Germany's discomfort with hyper-inflation. This hawkish bias may have caused two premature ECB rate hikes in 2011 - even though they were reversed later in the year after current ECB President Draghi from Italy replaced President Trichet from France. Since both US PCE and eurozone HICP hovered around 2% in the beginning of 2011, the seemingly modest difference between "below but close to 2%" and "symmetric 2%" was not so modest in effect.

Secondly, due to its singular target of moderate inflation, the ECB under President Trichet did not need to refrain from raising rates while facing a 10% unemployment rate in 2011, even though the Non-Accelerating Inflation Rate of Unemployment (NAIRU) was visibly lower at 9.1% as estimated by the Organization of Economic Cooperation and Development (OECD).

Why Might The US Dollar Rally Before The Next Bear Market?

Such difference in the medium term may be best explained by relative economic growth rates. Higher US growth relative to the rest of the world is positive for the USD because capital not only seeks higher yields on sovereign bonds but also higher absolute return through global stocks, real estate, and direct investments. For example, the USD appreciated before the 2001 bear market as the US prospered through a technology boom while Emerging Markets (EM) suffered sovereign debt crises. Conversely, the USD depreciated before the 2008 bear market as BRIC (Brazil, Russia, India, China) countries contributed the most to global growth.

Based on the current trajectory of relatively strong US growth (according to leading indicators from the OECD), a hawkish Fed relative to the ECB, BOJ (Bank of Japan), and PBOC (People's Bank of China), the USD will likely continue its recent rally after going up from 89 to 95 since April of 2018, until a bear market forms in the S&P 500. 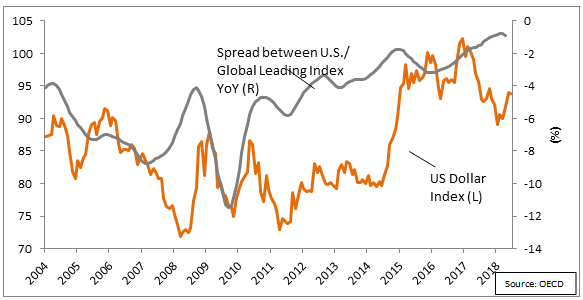 Why Might The US Dollar Fall During The Next Bear Market?

The Fed may halt or reverse its current rate hike cycle, as financial stability - often cited as the Fed's third yet unofficial monetary policy mandate after maximum employment and stable prices - deteriorates sometime within the next two years. In contrast, the ECB has only one official monetary policy mandate - stable prices and thus will have less room to delay rate hikes in the fall of 2019.

Thirdly, the fairly dovish President Draghi is scheduled to step down from his post in November 2019. The current front-runner to replace President Draghi is German. Germany, despite being the largest economy in the EU, has never had an ECB president since the ECB's inception in 1998. This impending change for ECB's top executive could be pivotal for the ECB because its Executive Board historically drives the consensus among Governing Council members who vote on monetary policy.

At some point after the onset of a bear market, anticipated rate hikes by the ECB and actual rate cuts by the Fed may push investors from USD assets to EUR assets. This dynamic will be most likely in a US bear market that originates from an economic slowdown in the US as opposed to the EU, Japan, or China. But even if a US bear market is contracted from a slowdown in the EU, Japan, or China, the US has the most monetary space to ease given sub-zero policy rates and high debt levels in EU and Japan. China has less fiscal space than in 2008 but retains some monetary space, which works better now alongside its stricter capital controls. However, the Chinese currency is not part of the USD index. Therefore, the USD Index is still likely to fall during a US bear market, unless the bear originates from a systemic debt crisis elsewhere.

What Could Bring On A Bear Market And A Dovish Fed?

Strong US growth relative to the rest of the world is likely to prop up the USD for some months. But the benefits of US tax reform may fizzle out in a year or two. Most of the surplus went into share buybacks instead of capital spending and wages. Increasing US tariffs on other countries would initially benefit the USD, as other countries balk at exporting to the US until the USD that exporters receive appreciates.

However, tariffs can easily escalate into a trade war. Subsequent currency wars and the strategic selling of US treasuries may also lead to a more dovish Fed. Furthermore, an independent Fed has to care about global growth to the extent that it affects US growth. The Fed's close call to not hike rates in September 2015 after China's RMB depreciated 3% in 2 days a month earlier is a case in point:

The Committee continues to see the risks to the outlook for economic activity and the labor market as nearly balanced but is monitoring developments abroad.

After all, EM's share of world GDP had eclipsed that of Developed Markets (DM) since 2008, while almost 40% of S&P 500's profits came from abroad.

The dueling clouds of protectionism and late-cycle fiscal stimulus will likely continue, at least through the US midterm election in November 2018, but thunder and lightning have already struck elsewhere: EU banking instabilities, domestic and international disagreements over the degree of Brexit, Abenomics reaching a terminal limit, China deleveraging while transitioning, and sporadic EM Balance of Payments crises. This is all happening while the Fed has to oversee a shrinking balance sheet, a deregulating financial system embedded with an unprecedented amount of covenant-lite high-yield bonds, and retiring baby boomers waiting in line to liquidate their stock portfolios. It also doesn't help that the Fed's Board of Governors currently has four seats out of seven empty, as three of President Trump's nominees try to squeeze through the Republican's 51-49 advantage in the Senate.

The longer-run projections represent each participant's judgment of the value to which each variable would be expected to converge, over time, under appropriate monetary policy and in the absence of further shocks to the economy.

But as clouds morph into storms, where undue fear overtakes undue greed, the Fed must respond promptly. For the average investor, anticipating the storm during cloudy days on top of currency positions can help to keep the powder dry for the next bull.

In addition to thanking those who gave honest feedback, I give special thanks to Michael Ning at PhaseCapital for deep macro talks, Briana Warsing at the Main Street Wire for meticulous editing, and Andrew Foster at the Mortgage Bankers Association for reminding me to have fun while writing. All errors are mine. Investors are encouraged to verify data points before taking a position.