A slide in the Chinese yuan is sparking fears of a sharper devaluation that could rattle global markets. Are the worries justified? We see the yuan depreciating moderately in response to slower growth, financial deleveraging and escalating trade tensions. We expect China to rely mostly on fiscal and monetary tools, rather than the currency, to manage any growth slowdown in the second half. 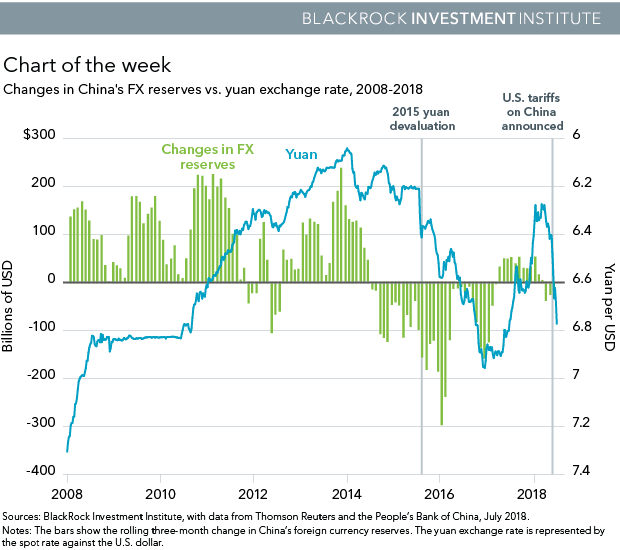 The Chinese currency posted its biggest monthly fall against the U.S. dollar on record in June - just as the trade tussle between China and the U.S. heated up. The yuan has slid 4% so far this year, with the fall accelerating since mid-June, when U.S. President Donald Trump announced a 25% tariff on $50 billion of Chinese imports. See the blue line in the chart above. We do not see China resorting to a 2015-style devaluation to cushion the blow. Back then, a lack of market confidence in China's policy framework contributed to capital flight (see the green bars), spooking global markets. Today, China has stricter capital controls in place - and improved coordination between policymakers. We believe this should give the government confidence to allow the yuan to gradually slide lower.

The recent tumble in the yuan and China's stock market has stoked fear: a 2015-style rapid depreciation could spark big capital outflows and another rout in global markets. Yet, we expect the Chinese authorities to let the yuan gradually depreciate in a controlled manner through the year-end. A moderately weaker yuan may lend a hand to Beijing in its balancing act: seeking to keep the economy humming, while cracking down on financial leverage and cushioning the impact from escalating trade actions. It could boost exports, mitigating blows from reduced domestic investment as a result of the deleveraging campaign. Other factors are weighing on the yuan. U.S. dollar strength is one. Diverging monetary policies in China (easing) and the U.S. (tightening) is another.

The policy, regulatory and growth dynamics in China today are different from those in 2015. Authorities have become more coordinated in their approach to fiscal, monetary and FX policies; China's economy is in a better place, and so is the global economy. Beijing has policy tools at its disposal to prop up the economy, with potential for more monetary easing and fiscal spending in the second half. The People's Bank of China's (PBoC) recent move to boost market liquidity is one such example. We also take comfort in the PBoC governor's pledge not to use the currency as a weapon in potential trade wars. A sharp yuan depreciation would undermine Beijing's deleveraging effort by driving capital flight and further tightening domestic financial conditions, in our view. It could also fuel inflation and dampen foreign investors' growing interest in China's domestic stock and bond markets.

Bottom line: We see moderate yuan depreciation ahead but are aware of rising risk from trade actions. (See our BlackRock geopolitical risk dashboard for more). We like selected opportunities in emerging market (EM) Asia equities, including China, as we think these risks are largely priced in and have resulted in attractive valuations. We see the gradual addition of China A-shares to global equity indexes as opportunities for global investors to gain exposure to the country's consumer market. We are neutral on rates and credit in China.

The U.S. economy likely grew at a healthy clip in the second quarter. Consensus estimates point to annualized quarter-on-quarter GDP growth of 4%, as fiscal stimulus kicked in. The strong growth momentum likely will reassure the Fed to stay on its normalization path. Our BlackRock GPS points to growth well above trend, and signals that consensus may be still too cautious on U.S. growth over the coming year. This will be the busiest week in the Q2 earnings season in the U.S. and Europe. U.S. companies are expected to post exceptionally strong earnings growth, thanks to tax cuts. The tech sector is seen leading in top and bottom line growth, extending a recent trend.

Richard Turnill
1.02K Followers
Richard Turnill, Managing Director, is Global Chief Investment Strategist for BlackRock, leading the Investment Strategy Function within the BlackRock Investment Institute (BII). He is responsible for ensuring we create, coordinate and communicate value added market and investment insights and deliver them consistently to our clients and client facing professionals. Prior to his current role he was Chief Investment Strategist for the Alpha Strategies Group, responsible for developing strategic plans around the Alpha Strategies product range and the positioning of Alpha Strategies products both internally and externally. He has also served as Head of the Global Equity team within the Fundamental Active Equity division of BlackRock's Portfolio Management Group. He was responsible for leading the team which manages large cap global equity portfolios. Mr. Turnill's service with the firm dates back to 1996, including his years with Merrill Lynch Investment Managers (MLIM), which merged with BlackRock in 2006. At MLIM, he led the global equity team and was responsible for overseeing all aspects of the investment process. Earlier, Mr. Turnill was a group economist in MLIM's Central Strategy Group, head of MLIM's asset allocation and economics team, and was the Chief Investment Officer for the Merrill Lynch Global Private Client discretionary business in EMEA Pacific. Prior to joining MLIM in 1996, Mr. Turnill worked in the international division of the Bank of England as an economic advisor and the global economics team of Paribas Capital Markets in London. Mr. Turnill earned an MA degree in economics from Cambridge University in 1991.
Follow
1 Comment
To ensure this doesn’t happen in the future, please enable Javascript and cookies in your browser.
Is this happening to you frequently? Please report it on our feedback forum.
If you have an ad-blocker enabled you may be blocked from proceeding. Please disable your ad-blocker and refresh.