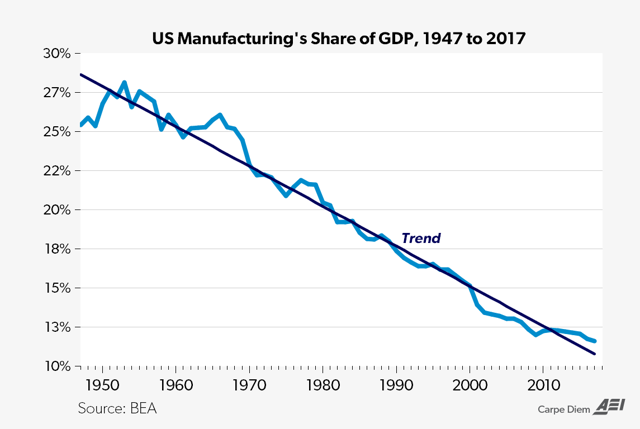 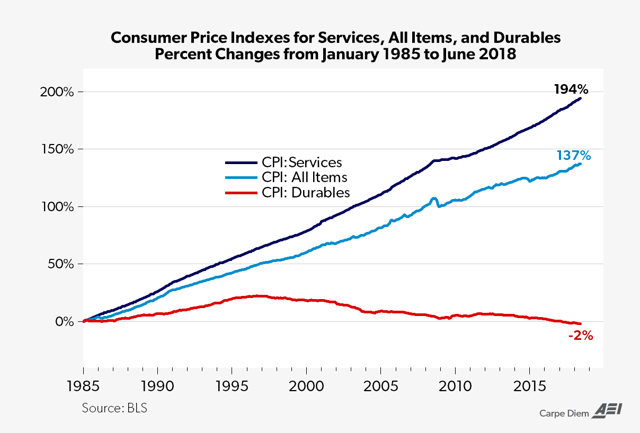 The BEA's report last week on GDP by Industry showed that real manufacturing output (value added) in the US reached an all-time record high of more than $2 trillion (in 2009 dollars) in the first quarter of this year. See related CD post, "De-industrialization? Well, America's thriving manufacturing sector just produced a record level of output in Q1." That was actually the third quarter in a row starting in 2017:Q3 that US manufacturing reached record-high levels, surpassing the previous record-high level of US factory output established back in 2007:Q3 before America's and other countries' manufacturing sectors were devastated by the Great Recession.

Those effects of the recessions were so significant that it took about a decade for US manufacturing output to completely recover and reach record-high production levels again. Many other countries, like the UK, France, Canada, Italy, Brazil, Australia, Sweden and Greece, also experienced a long recovery period for manufacturing following the Great Recessions. For the US, despite all of the negative news we hear about the supposed de-industrialization of America, the hollowing out of US manufacturing, and claims that we "don't make anything here anymore," the fact that the US set new records for manufacturing output for the last three quarters runs counter to those negative narratives of gloom and doom about American manufacturing.

And there are several other interesting long-term trends that help put America's record-setting level of output in recent quarters in sharper perspective.

1. As the top chart above shows, manufacturing output as a share of US GDP has been in steady decline since the early 1950s, falling from a high of 28% in 1953 to a low of 11.6% last year. Consistent with that declining share of GDP is the fact that US manufacturing output has grown at a slower annual rate than GDP by more than one percentage point: 5.2% for manufacturing vs. 6.4% for GDP. Over the last 25 years, GDP has grown annually by 4.4%, while factory output has grown annually by only 2.9%, 1.5 percentage points lower. That difference in growth rates helps explain why GDP recovered within several years of the Great Recession, while it took US manufacturing much longer.

Bottom Line: One of the reasons that America's manufactured goods have become a smaller share of GDP over time (top chart) is that those goods get cheaper and cheaper over time relative to other goods, and especially relative to the cost of services (bottom chart). Therefore, for US manufacturing output to be at record-high levels is even more impressive when you consider that the prices of manufactured goods have been continually and significantly falling for decades relative to other goods, services, and wages. As stated before, US manufacturing is not in decline, but is alive and well, producing record levels of output in recent quarters despite significant price deflation for manufactured goods. No other sector of the US economy delivers greater value to American consumers than manufacturing when it comes to providing more and more output at prices that have declined annually by 2.64% in real inflation-adjusted terms over the last quarter-century.

Mark J. Perry
935 Followers
Dr. Mark J. Perry is a full professor of economics at the Flint campus of The University of Michigan, where he has taught undergraduate and graduate courses in economics and finance since 1996. Starting in the fall of 2009, Perry has also held a joint appointment as a scholar at The American Enterprise Institute. Perry holds two graduate degrees in economics (M.A. and Ph.D.) from George Mason University and in addition, and has an MBA degree in finance from The University of Minnesota. In addition to an active scholarly research agenda, Perry enjoys writing op-eds for a general audience on current economic issues and his opinion pieces have appeared in most major newspapers around the country, including USA Today, Wall Street Journal, Washington Post, Investor’s Business Daily, The Hill, Washington Examiner, Dallas Morning News, Sacramento Bee, Saint Paul Pioneer Press, Miami Herald, Pittsburgh Tribune-Review, Detroit News, Detroit Free Press and many others. Mark Perry has been best known in recent years as the creator and editor of one of the nation’s most popular economics blogs, Carpe Diem. Professor Perry has written on a daily basis since the fall of 2006 to share his thoughts, opinions and expertise on economic issues, with a strong emphasis on displaying economic data in a visually appealing way using graphs, charts and tables.
Follow
2 Comments
To ensure this doesn’t happen in the future, please enable Javascript and cookies in your browser.
Is this happening to you frequently? Please report it on our feedback forum.
If you have an ad-blocker enabled you may be blocked from proceeding. Please disable your ad-blocker and refresh.