Economic activity in Latin America continues to recover. Following the pickup in domestic demand led by consumption in 2017, investment is finally gathering strength. Overall, the region is expected to grow by 1.6 percent in 2018 and 2.6 percent in 2019, up from 1.3 percent in 2017 but down from our April projections.

Growth momentum, however, is more differentiated than projected in April. While growth is accelerating in some countries, the recovery has become tougher for some of the largest economies, because market pressures at the global level have been amplified by country-specific vulnerabilities.

Growth in the United States continues its strong pace, benefiting the economies in the region with close ties to it. Similarly, higher commodity prices are providing support for the region's commodity exporters.

But conditions for global demand and finance have become more fraught. The upturn in global demand is not as strong as expected in all countries, which has increased downside risks to the region's external demand. At the same time, global financial conditions, while still accommodative overall, are gradually tightening.

Financial market pressures have been particularly pronounced in countries with weaker domestic economic fundamentals, or because of uncertainty about politics and policy. Escalating trade tensions and conflicts are increasing downside risks to the current outlook, including through their potential impact on uncertainty and investment. 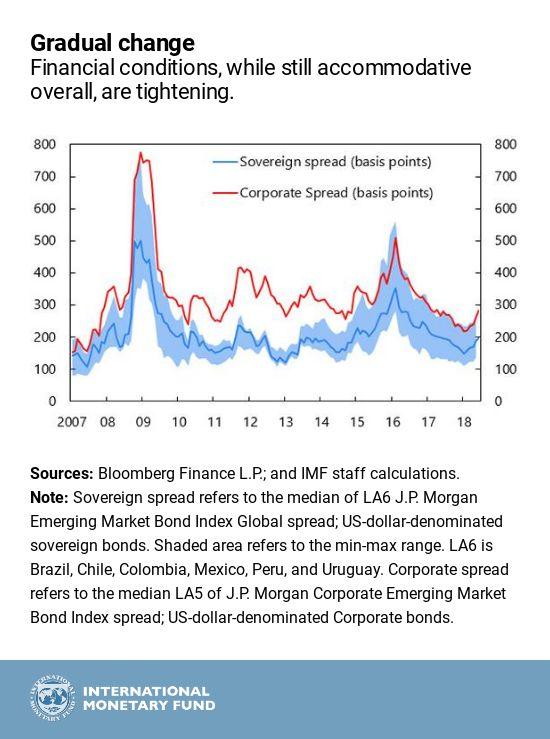 Some commodity exporting countries are enjoying a recovery in business and consumer confidence, feeding into higher domestic demand. Also in some countries internal uncertainty has recently diminished, if not dissipated, with the end of their electoral cycle.

Nevertheless, domestic demand is expected to weaken in some large economies, reflecting policy uncertainty related to upcoming elections or effects of the near-term policy tightening. At the same time, monetary policy support going forward is likely to be more limited as many central banks in the region have suspended their monetary policy easing cycle.

Policies to sustain the recovery

The recent differentiation in market pressures highlights the importance of policies to strengthen domestic fundamentals. With fiscal adjustment needed over a number of years to achieve sustainability, now is the time to gradually but steadily rebuild fiscal buffers. Higher global growth and commodity prices provide a narrow window of opportunity, as fiscal consolidation would subtract from near-term growth.

At the same time, to ensure that growth is inclusive and sustainable, attention should be given to the quality of the fiscal adjustment and structural policies, including by prioritizing education spending and tackling infrastructure bottlenecks.

After a solid start to the year, growth in Argentina is projected to turn negative in the second and third quarters of 2018. While a drought reduced agricultural yields, the pressure on the currency in May-June has taken a toll on inflation and investor confidence, and created a need for tighter monetary and fiscal policies. Growth in 2018 is expected to slow to 0.4 percent, with a gradual recovery in 2019 and 2020 that will be supported by restored confidence under the Fund-supported stabilization program, a lower cost of capital, lower inflation, and strong export demand from trading partners.

Now is the time to gradually but steadily rebuild fiscal buffers.

In Brazil, economic growth is expected to proceed at a moderate pace, driven by private consumption and investment. GDP growth for 2018 has been revised down to 1.8 percent because of tighter global conditions and the recent truckers' strike. The uncertain outcome of the 2018 general elections may further weigh down on growth. Inflation has declined to record lows and is projected to increase towards the midpoint of the inflation target in 2019 as the output gap narrows. The central bank ended its easing cycle in May after the real depreciated by about 13 percent since the beginning of the year. Efforts to pass a much-needed pension reform-a key measure underlying fiscal consolidation-have stalled ahead of the 2018 elections.

In Chile, growth in 2018 has been upgraded to 3.8 percent (from 3.4 percent) due to the ongoing strong rebound of business and consumer confidence, which is expected to largely offset the drag from higher oil prices. Inflation will continue to gradually converge towards the target of 3 percent, driven by the strong growth momentum and higher oil prices.

In Colombia, growth is gathering momentum as private consumption and exports have gained some strength supported by higher external demand and oil prices as well as the ongoing monetary easing cycle. Private investment is likely to pick up later in the year helped by the tax reform and recovery in oil prices. Medium-term growth prospects are favorable, helped by a stronger infrastructure investment program.

In Peru, the economy is recovering after a difficult 2017. Supported by high commodity prices and countercyclical fiscal and monetary stimulus, growth in 2018 is expected to increase to 3.7 percent. It should rise to above 4 percent in 2019-20, driven by private sector domestic demand, even as gradual fiscal consolidation takes place. Headline inflation is expected to gradually increase to the center of the central bank target range by end-2018.

Venezuela remains stuck in a profound economic and social crisis. Real GDP is projected to fall by about 18 percent in 2018-the third consecutive year of double-digit declines in real GDP-driven by a significant drop in oil production and widespread micro-level distortions on top of large macroeconomic imbalances. We expect the government to continue to run wide fiscal deficits financed entirely by an expansion in base money, which will continue to fuel an acceleration of inflation as money demand continues to collapse. We are projecting a surge in inflation to 1,000,000 percent by end-2018 to signal that the situation in Venezuela is similar to that in Germany in 1923 or Zimbabwe in the late 2000's. The collapse in economic activity, hyperinflation, and increasing deterioration in the provision of public goods (health care, electricity, water, transportation, and security) as well as shortages of food at subsidized prices have resulted in large migration flows, which will lead to intensifying spillover effects on neighboring countries.

Mexico, Central America, and the Caribbean

Mexico's outlook continues to be clouded by the protracted uncertainty related to the trade relationship with the United States in the absence of an agreement on the renegotiation of NAFTA. GDP growth in 2018 is still expected to accelerate compared to last year, supported by higher growth in the United States and on account of a stronger-than-expected performance in the first quarter of the year. However, growth for 2019 was revised down to 2.7 percent to reflect the impact of the prolonged trade-related uncertainty on investment and, to a lesser extent, private consumption. Inflation is expected to continue to fall in 2018, as the central bank maintains a tight monetary policy stance. A clear commitment to fiscal responsibility and the continuing reduction of the public debt ratio by the newly-elected administration will be crucial for preserving macroeconomic and financial stability.

In Central America and the Dominican Republic, robust U.S. growth and higher remittances associated with the uncertainty about future U.S. migration policies continue to underpin a strong growth performance in 2018. Nonetheless, political uncertainty in Nicaragua and temporary disruptions in the construction sector in Panama weigh on domestic demand, leading to a small downward revision of the regional growth in 2018 to 4 percent.

Economic prospects for the Caribbean are generally improving, supported by higher U.S. growth. Reconstruction from the devastating hurricanes of 2017 in tourism-dependent countries has been largely delayed so far, but is expected to pick up in 2019. Rising commodity prices are projected to lead to moderate growth for commodity exporters in 2018 and 2019. 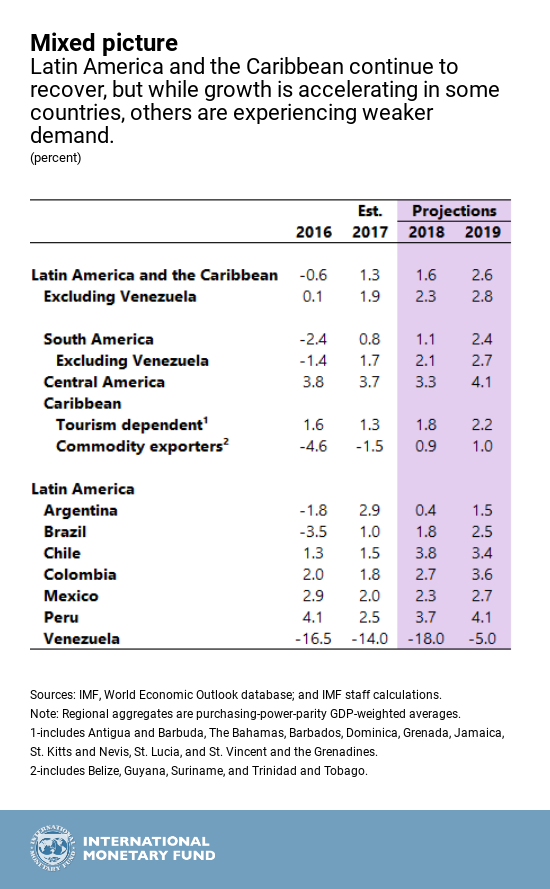 iMFdirect
820 Followers
iMFdirect is the policy blog of the International Monetary Fund. Leading economists and officials of the Fund discuss the IMF’s work and advice on economics and finance at a global and a national level.
Follow
1 Comment
To ensure this doesn’t happen in the future, please enable Javascript and cookies in your browser.
Is this happening to you frequently? Please report it on our feedback forum.
If you have an ad-blocker enabled you may be blocked from proceeding. Please disable your ad-blocker and refresh.