... includes developing and implementing new FDA review tools, such as standardized review templates, new information sources and development tools for sponsors and (potential) data-sharing agreements ex-U.S. regulators. It also includes the establishment of a new Office of Therapeutic Biologics and Biosimilars to improve coordination and support the activities under the Biosimilar User Fee Act. 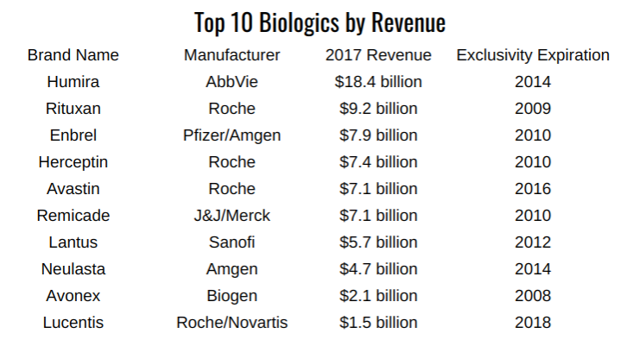 AbbVie finished nearly 5% down following the announcement, with short sentiment extended on the heels of a Citron tweet. The tweet forecasted a 36% price reduction for "the next great drug short".

Other analysts pointed to patent protection lasting until 2023 in contradiction of the short-side firm.

As the debate continues, a lack of scientific insight continues to dilute the value of the ongoing discussion. A basic understanding of the related science is fundamental to making sound investment decisions regarding the biotech giants.

First and foremost investors must grasp the distinction between chemical (small molecule) and biological (large molecule) pharmaceuticals. Generics generally refer to pharmacokinetical equivalents of synthesized drugs and are covered under the Hatch-Waxman Act. Despite common misconception that generics have to contain 80-125% of the active ingredient, the FDA has higher standards. In reality, the proposed generic drug must show pharmacokinetic (PK) equivalence across a range of parameters. In equivalence trials, PK values and the corresponding 90% confidence intervals must be within 80-125% of the observed reference drug value. Clinical pharmacist Timothy O'Shea explains:

To explain with an example, imagine that a brand-name product was shown to have an AUC of 100 units in a crossover study. In the same study, let’s say the generic product was shown to have an observed mean AUC of 93 with a calculated 90% CI of 84-110. Because the FDA requires the mean AUC of the generic product as well as its entire 90% CI must fall between 80 and 125 units, this would meet the bioequivalence requirement.

Generics generally get approved under the 505(b)(2) pathway, which concerns drugs regulated under the Federal Food, Drug, and Cosmetic Act. This pathway is available to a limited range of biosimilars, though. Biosimilar approval via 505(b)(2) is available until March 23, 2020, and only for biosimilars of biologics approved prior to the Biologics Price Competition and Innovation Act of 2009 (BPCIA) which was enacted on March 23, 2010. 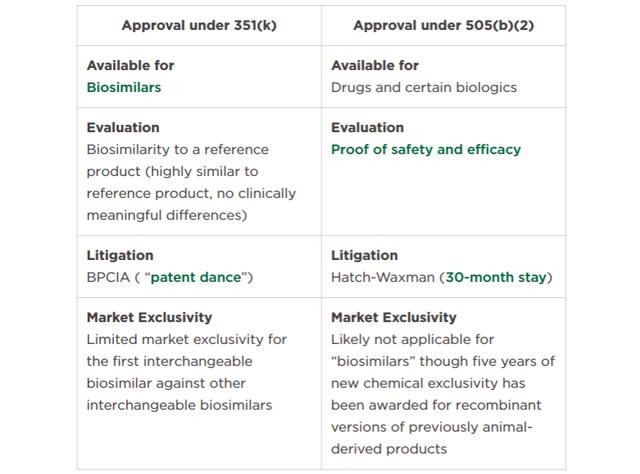 Section 351(i) of the Public Health Service Act stipulates that biologic approval under the 351(k)(1) Biosimilar pathway is contingent on a proposed biosimilar being "highly similar to the reference product notwithstanding minor differences in clinically inactive components...[with] no clinically meaningful differences between the biological product and the reference product in terms of safety, purity, and potency." There are intricacies for establishing biosimilarity which are dependent on several factors - interested readers can find specifics here - but generally, biosimilars must share the same mechanism of action, conditions of use, route of administration, dosage form, dosage strength, and manufacturing facility standards as the reference drug.

So what's the hindrance surrounding biosimilars? Why have there been only 11 biosimilars ever approved by the FDA, but over 1,100 generics approved?

First, the manufacturing process of large molecule drugs is significantly more complex than the small molecule process. Something as seemingly minute as a one degree temperature deviation can result in detrimental health effects to the patient population.

The dynamic nature of biologics also calls to question whether or not a biologic is a biosimilar of itself several years after initial FDA approval. In this light, how can biosimilar testing be completed in a timely manner such that changes in manufacturing processes of the reference drug are accounted for? The National Institute of Health elaborates:

Developing a biosimilar drug is challenging, because any slight changes in the structure of the drug (e.g., changes in the protein by altering the amino acid sequencing as well as the protein folding) have the potential to modify the efficacy, safety, and quality of the drug in development. In addition, any changes in the structure may also affect the metabolism, formulation, or stability of the biosimilar. There are also challenges to manufacturing the biosimilar. This includes alterations in the fermentation temperature, pH level, filtration, and purification of the reference drug. Even the inactive components of the biosimilar (eg, stabilizers, solubilizers, buffers, pH, bulking agents) may affect aspects of the reference drug, particularly by influencing its immunogenicity.

3 of the top 5 selling biologics - Humira, Remicade, and Enbrel - have undergone over a dozen process changes since being approved. Clear problems arise as biosimilarity testing takes years to complete and require thousands of samples of the reference drug.

Will the FDA succeed in bringing more biosimilars to the market to increase competition and lower drug prices? I strongly doubt it. The Biosimilars Action Plan and comments from Dr. Gottlieb reminded me of a similar announcement made last year, which included a list of off-patent drugs without approved generics. In the announcement, the administration outlined numerous steps to be taken in order to fuel generic competition and lower expenses in the synthesized drugs market, including new ANDA review templates & development tools for ANDA sponsors.

In the year since, the new measures have found little success. In the table below I've aggregated ANDA data for the 2017 and 2018 fiscal years ending September 2017 & September 2018, respectively, to illustrate this.

In the inaugural year of new FDA measures to fuel generic entry, new ANDA submissions and ANDA approvals are on the decline while Refusals to Receive (rejection of ANDA by the FDA) and Complete Response Letters (indicating non-approval of proposed generic) are on the rise. The only apparent positive result of the new FDA measures is a 33% faster overall response rate by the administration relative to FY2017.

Past performance is not an indication of future performance, but both of the FDA's so-called action plans designed to increase competition and decrease drug spending come in lieu of real action. The only apparent improvements of the biologics plan in comparison to the generics plan is the establishment of a new Office of Therapeutic Biologics and Biosimilars (OTBB), intended to assist activities related to the availability of biosimilars, and potential data sharing agreements with other countries.

Initial sentiment lending to the idea that biologics producers will face legitimate detriment in the face of the FDA's new measures is unsound. Judging by ANDA indicators provided by the FDA, the implementation of "new FDA review tools, such as standardized review templates, new information sources, and development tools for sponsors" will do little to achieve the intended goals of higher competition and lower drug costs.

The complex nature of biologics relative to synthesized drugs casts further doubt on the success of the new measures as the agency has limited power in addressing the underlying issues hindering biosimilar availability.

Author's note: Did you find this article useful? I write about value opportunities - short and long - in the healthcare sector. To follow me, just press the orange "Follow" button next to my name at the top of the article. Feel free to send me a message or comment below with what you did or didn't like, suggestions for improvement in the article, or with any questions, and I'll be happy to reply.

Andrew Roberts
647 Followers
B.S. in Actuarial Science; experience in Healthcare data management, credit analysis, underwriting. I do not hold any position in any companies I cover.Always open to questions or discussion.
Follow