Murmurings are increasing among monetary policy wonks and money market mavens that the Federal Reserve has been having a harder time than usual keeping overnight interest rates within its self-prescribed boundaries. The effective federal funds rate, the overnight lending rate between banks that the Fed directly controls, has been creeping too close to the upper boundary of its target rate since April. Back in April, the Fed funds rate crept to within 5 basis points of the upper boundary at the time, which was 1.75%. That upper boundary is currently set at 2%.

You can see on the chart above that the rate started getting a little bumpy with tiny basis-point steps up starting around March. Let's zoom in.

June set another too-close-for-comfort record, with the effective overnight rate climbing to 1.92% (the last bump in the graph), only 3 basis points lower than interest paid on excess reserves. This happened from June 20th to June 26th. The rate on excess reserves has been the same as the overnight rate since interest was authorized to be paid on excess reserves in 2008, but it was lowered 5 points relative to the upper boundary at the last rate hike in an attempt to get banks to loan out more of the excess and release some of the pressure on short-term rates.

The manager noted that the release of the minutes of the May FOMC meeting, and particularly the reference to a possible technical adjustment in the interest on excess reserves (IOER) rate relative to the top of the FOMC's target range for the federal funds rate, prompted a small reduction in federal funds futures rates.

The chances of a rate hike at the upcoming August 1st meeting are only 2.5%, but the Fed may still tweak the rate on excess reserves. We’ll have to see what happens next week.

In any case there has been much speculation as to why exactly the effective rate has been sticking so close to the upper boundary lately. There are two leading explanations. The first was put forth by Morgan Stanley (MS) as a concentration of 90% of all excess reserves in the banking system into 5% of all banks, making liquidity surprisingly scarce for most banks, which then have to bid up the overnight rate in order to satisfy reserve requirements.

The second leading explanation is competition for short-term funds from the US Treasury selling a glut of short-term bills to finance the increasingly massive Federal budget deficit, which keeps growing. Estimates are now $100B more a year than previously, and keep in mind we’re still in the boom phase of the current business cycle. What happens when the next recession hits?

The next recession will balloon federal deficits to laughable records. Let’s just see what's possible based on discrepancies between past projections versus actual deficits. Take a look at this piece of work from the Congressional Budget Office in 2006, the peak of the housing bubble. 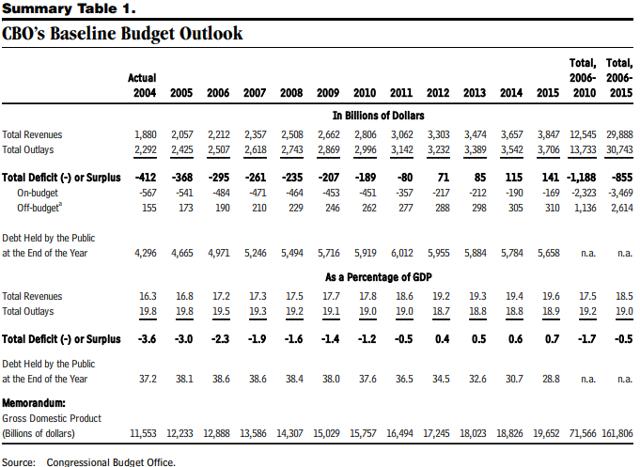 The actual deficits from 2006-2015 ended up being $7.882 trillion instead of the projected $855 billion, so reality overshot CBO projections by about an order of magnitude. Whatever. All in a day’s work of projecting out current trends at the CBO, since that’s all they seem to know how to do. Now that the Trump Administration is projecting deficits of $8 trillion over 10 years instead of $7.1 trillion, how much will they actually be assuming there will be a recession sometime within the next 10 years? If the budget trends of the last recession repeat arithmetically, then oh, about $15 trillion, or about $1.5 trillion a year.

Whatever the cumulative 10-year deficit ends up being exactly, it’ll be a lot bigger than $8 trillion, and it will force the Treasury to borrow on the short end in amounts that are just unfathomable. Either interest rates will skyrocket in such a recession, making it possibly deflationary, or the Fed will compensate by monetizing the new debt, creating an inflationary recession. I think the latter is the better possibility, since inflation is already here, and could itself be causing some of the pressure on the Fed funds rate.

As of now though, inflation as a cause of Fed funds trouble is being completely ignored as a possible reason for pressure on the effective fed funds rate to begin with.

Consider, Bloomberg published a detailed piece on July 3rd about the trouble in the federal funds rate but nowhere in the article is the word “inflation” ever mentioned. Back on June 15th, the New York Times put out a piece on the same question, but again, the word “inflation” does not appear. Even FT, which is usually pretty thorough, in an article on June 14th on the exact same topic completely neglected the inflationary elephant in the room. The word doesn’t show up in any of these articles. Not once.

Let’s move to June 29th when the Bureau of Economic Analysis published the monthly Personal Consumption Expenditures (PCE) Index for May, the Fed’s so-called preferred measure of inflation. The index came in at a 2.3% year-over-year increase compared to 2% year over year in April, the highest rate since 2012. Excluding food and energy, Core PCE rose 2.0% from 1.8% in April, also the highest rate since 2012. The combined jump for both consecutive monthly year-over-year measures, 0.3% for the PCE and 0.2% for Core PCE, was the highest combined jump since 2011. The next release comes out on July 31st.

The upward pressure on the Fed funds rate had Bloomberg come out with an article last week citing Viktor Shvets, head of Asia strategy at Macquarie Commodities and Global Markets, a unit of Australia’s biggest investment bank. He said of the Fed, “They will be forced at some point in time over the next three to six months to stop reducing the size of their balance sheet.” This is because reducing the balance sheet puts pressure on short-term rates by reducing short term liquidity. If they’ll be forced to stop reducing the balance sheet during a time of economic boom, what will they have to do during the bust?

Considering all the upward pressure on the Fed funds rate already, we could see an inflationary feedback loop by the next recession. A recession would force the Treasury to borrow much more than currently projected, which would put even more upward pressure on the Fed funds rate. In order to counteract that pressure, the Fed would have to create amounts of money hitherto unheard of in order to force short-term rates back down. That monetization would exacerbate the pressure on overnight rates still more, triggering a feedback loop.

Conclusion: The next recession is more likely to be inflationary than deflationary.

Additional disclosure: I am long precious metals and energy stocks.