This is a quick follow-up to my recent article on the Eurozone. There I argued for more integration or separation in the Eurozone since ECB monetary policy is pushing regional economies further apart rather than together. I showed a version of the below chart in the article to illustrate this point: 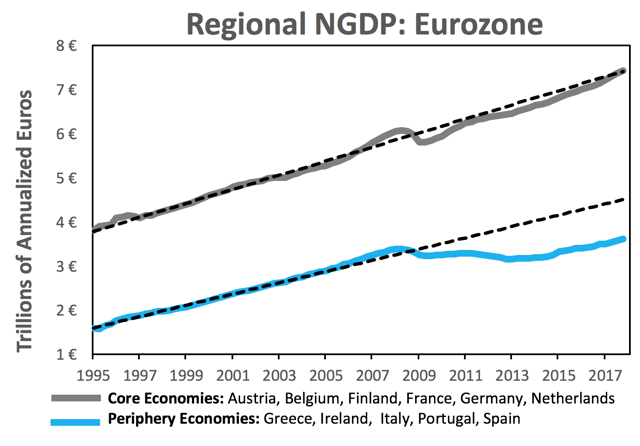 ECB policy - and its response to the various shocks hitting the Eurozone - has effectively kept nominal demand growth in the core economies fairly stable while pulling it down in the periphery. This divergence suggests the Eurozone is quite far from being an optimal currency area (OCA).

Someone asked on twitter what the chart would look like for the United States. So I made a similar chart that compares the top twenty states (ranked in terms of GDP per capita) to the bottom twenty: 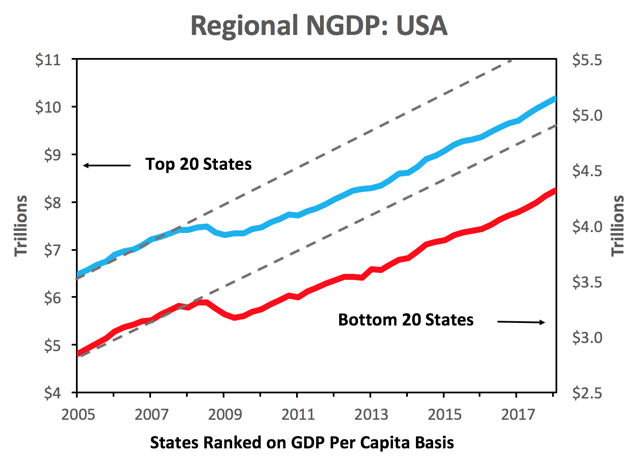 While both regions are below their pre-crisis trend paths, Fed policy has at least been consistent in how it has affected nominal income growth in both rich and poor states. So the Fed beats the ECB on consistency, at least!

Moreover, this outcome suggests there are more effective regional shocks absorbers in the United States that make the dollar zone more of an OCA than the Eurozone. That is, even if Fed policy is not optimal for all regions of the United States this is less of a problem than in Europe because the regions can better handle bad monetary policy via fiscal transfers, labor mobility, safer retail banking system, flexible prices, etc. For more on these shock absorbers see my other recent post on this topic.

David Beckworth
464 Followers
David Beckworth is an assistant professor of economics at Texas State University. He is the author of Macro and Other Market Musings.
Follow