The following chart shows the nominal (red) and inflation-adjusted (blue) trends for median household income in the United States from January 2000 through June 2018, as given by Sentier Research's monthly estimates. The inflation-adjusted figures are presented in terms of constant June 2018 U.S. dollars. 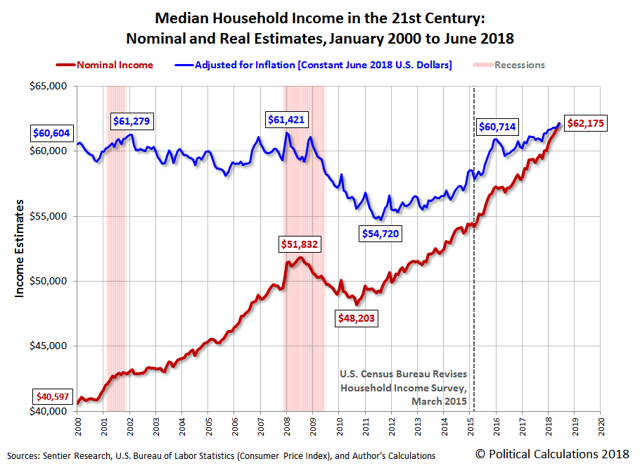 That fast pace of growth is reflected in the year over year nominal growth rate for median household income, which we've visualized in the following chart. 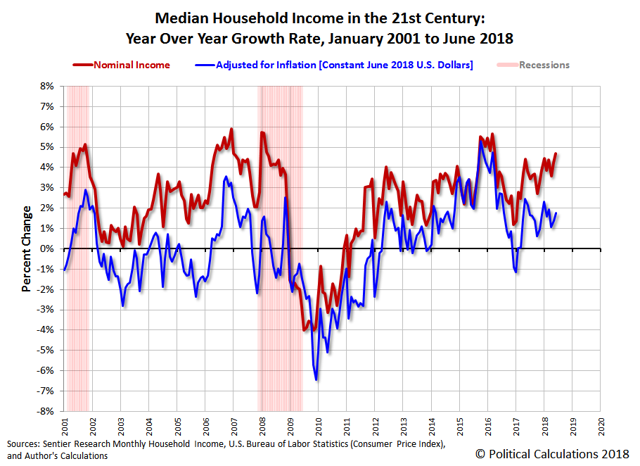 The nominal rate of year over year growth for median household income has now equaled or exceeded 2.7% over the last 15 months. That duration exceeds the two longest durations of 2.7% or higher growth recorded since the Great Recession began after December 2007, which at thirteen months each, were recorded from February 2014 through February 2015, and later from August 2015 through August 2016.

It's a big month for our alternative method for estimating median household income in the United States because the U.S. Bureau of Economic Analysis' data on personal income has just gone through an extensive revision, which is driving us to update our alternate estimates. The revision affects all of the BEA's data extending back to 1929.

The following chart shows our updated model for estimating the median household income in the U.S. Our basic methodology for generating the model remains unchanged, where we recognize a break in the data that is attributable to changes in the U.S. Census Bureau's questionnaire for collecting income data as part of its monthly Current Population Survey that was implemented in March 2015. 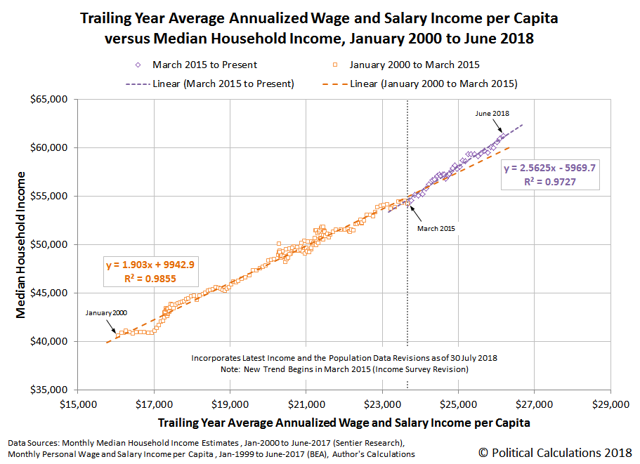 Sentier Research. Household Income Trends: January 2000 through May 2017, March 2018 through June 2018. [Excel Spreadsheet with Nominal Median Household Incomes for January 2000 through January 2013 courtesy of Doug Short]. [PDF Document]. Accessed 27 June 2018. [Note: We've converted all data to be in terms of current (nominal) U.S. dollars to develop the analysis presented in this series.]

Ironman at Political Calculations
2.26K Followers
Ironman is the alias of the blogger at Political Calculations, a site that develops, applies and presents both established and cutting edge theory to the topics of investing, business and economics. We should acknowledge that Ironman is either formerly or currently, and quite possibly, simultaneously employed as some kind of engineer, researcher, analyst, rocket scientist, editor and perhaps as a teacher of some kind or another. The scary thing is that's not even close to being a full list of Ironman's professions and we should potentially acknowledge that Ironman may or may not be one person. We'll leave it to our readers to sort out which Ironman might behind any of the posts that do appear here or comments that appear elsewhere on the web!
Follow
6 Comments