Here are the latest oil production numbers from the EIA. All data is in thousand barrels per day unless otherwise noted. 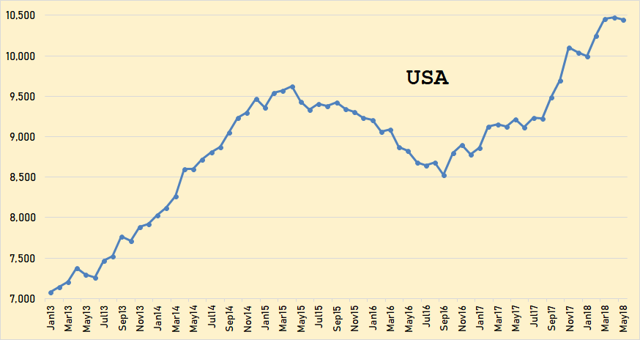 The USA through May 2018. The upward surge has stalled for the last two months. US production was down 30,000 bpd in May. 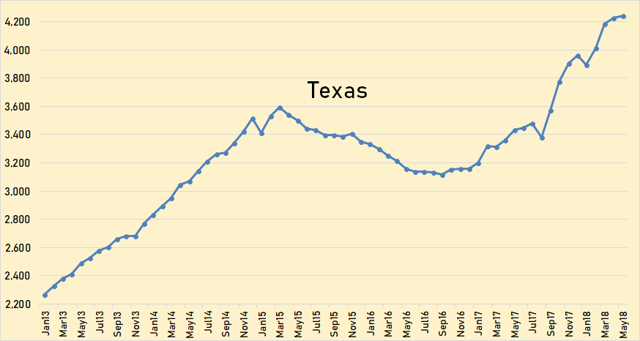 It is a little astonishing how close the Texas chart resembles the USA chart. Texas is, by far, the USA's largest producer. As Texas goes, so goes the USA. Texas production was up 20,000 bpd in May. 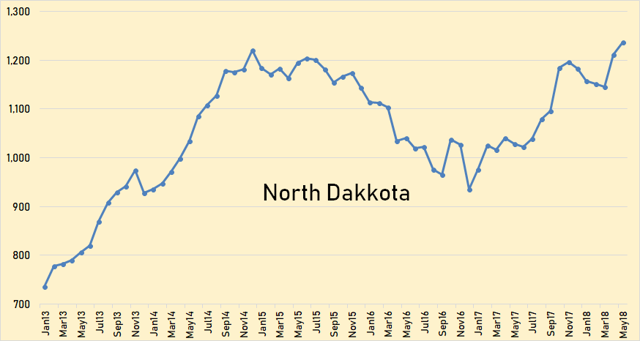 North Dakota production has increased significantly in the last two months. They were up 67,000 bpd in April and up another 25,000 bpd in May. 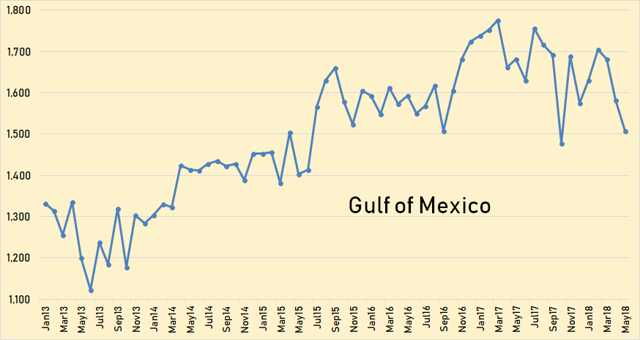 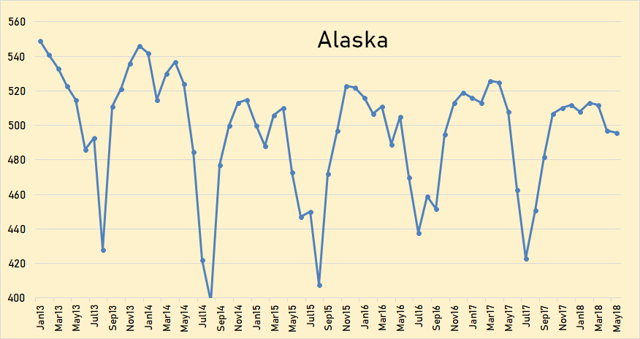 Alaska was down only 1,000 bpd in May but that was 12,000 bpd lower than last May. They are now entering the maintenance season. Expect huge drops in June and July. 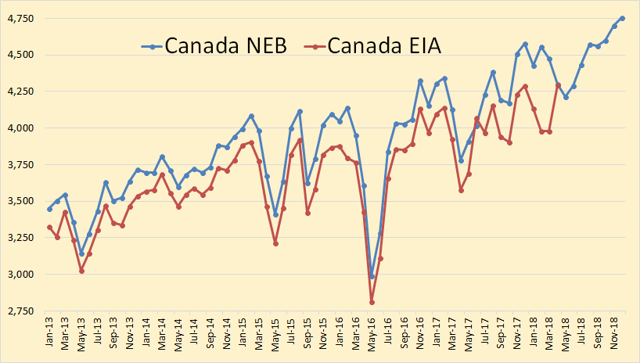 The EIA data in this chart is through April and the National Energy Board data is estimated through December 2018. The EIA data is usually lower than the NEB data but they both agree on April production. 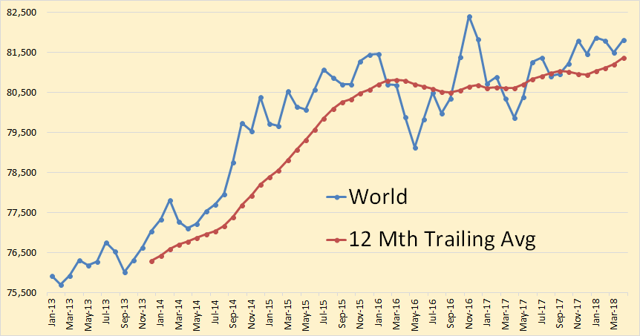 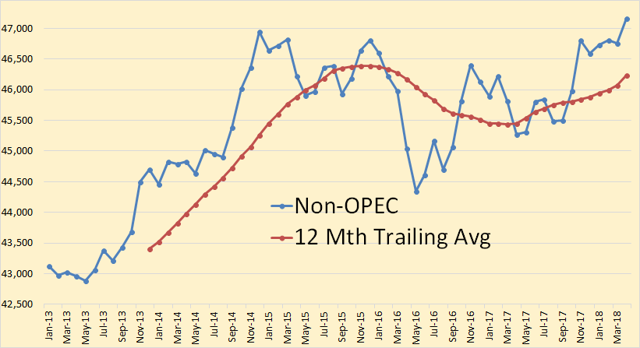 Here I am adding a few charts and comments from Exxon Mobil's (XOM) 2018 Outlook for Energy: A View to 2040. Their text is in italics. Any bold in their text is mine. 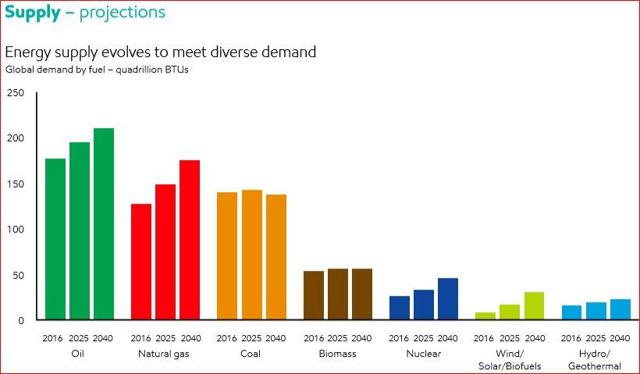 • Technology improvements lead to wind, solar, and biofuels increasing, with a combined growth of about 5 percent per year
• Non-fossil fuels reach about 22 percent of total energy mix by 2040
• Oil continues to provide the largest share of the energy mix; essential for transportation and chemicals• Natural gas demand rises the most, largely to help meet increasing needs for electricity and support increasing industrial demand• Oil and natural gas continue to supply about 55 percent of the world's energy needs through 2040• Coal's share falls as OECD countries and China turn to lower-emission fuels• Nuclear demand grows 70 percent between 2016 and 2040, led by China• Wind, solar, and biofuels reach about 5 percent of global energy demand

They assume that supply will always evolve to meet demand. 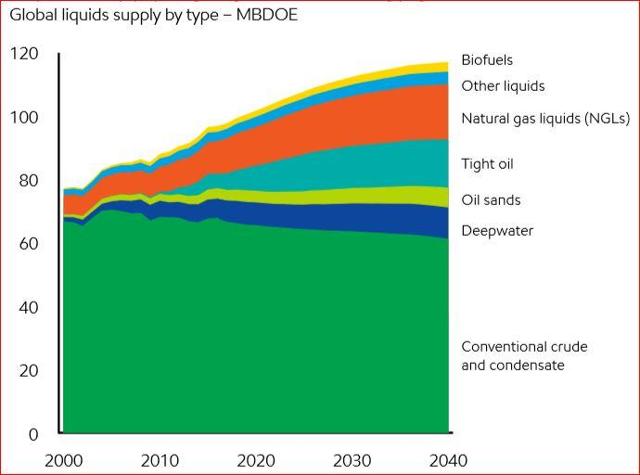 This is what they say we will need in 2040 and will, therefore, be delivered by technology. 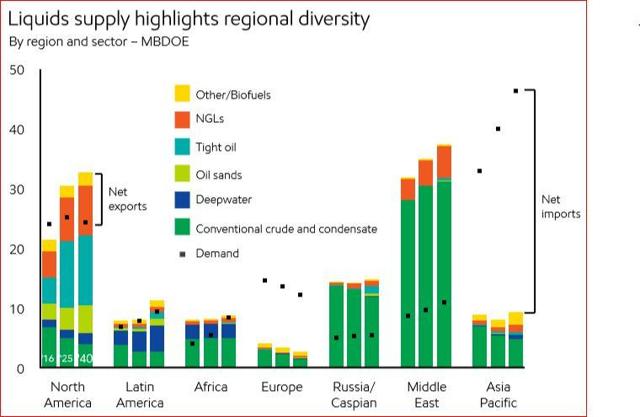 And here is where all that oil will come from. North America is the US and Canada. They count Mexico as part of Latin America. In 2040, they have total North American conventional production down to about 3.5 million barrels per day. They have at about 12 million bpd and oil sands at about 4.5 million bpd as best as I can eyeball the chart.

They have almost all conventional oil coming from the Middle East and Russia/Caspian. Caspian is mostly Azerbaijan. 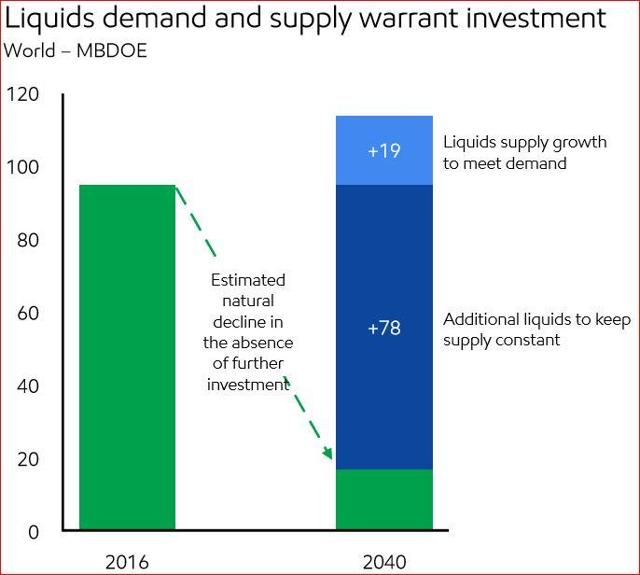 This chart is a little shocking. They have total liquids declining to about 18 million bpd by 2040 without investment. That means if everyone stopped drilling today, or in 2016, that would be the natural decline of what is online today. But to meet demand we will need 97 million barrels per day of new oil. 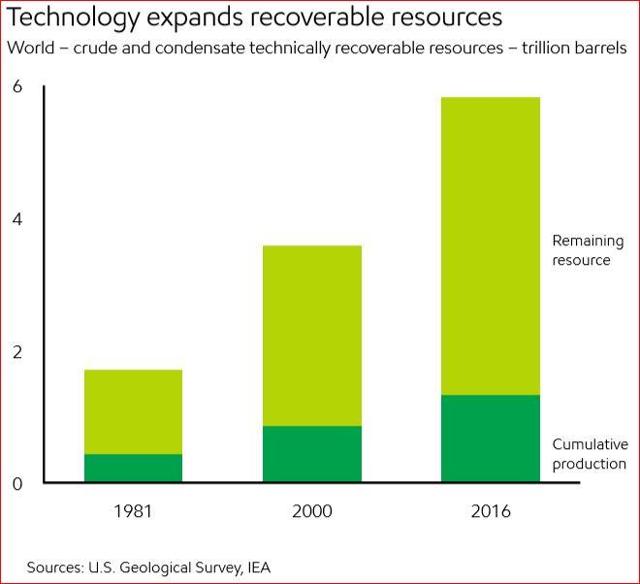 And this is what they say we have left, about 4.5 trillion barrels of remaining recoverable resources.

• Without further investment, liquids supply would decline steeply
• More than 80 percent of new liquids supply needed to offset natural decline
• Per the International Energy Agency, about $400 billion a year of upstream oil investment is needed from 2017 to 2040
• Global oil resources are abundant
• Oil resource estimates keep rising as technology improves
• Technology has added tight oil, deepwater, and oil sands resources
• Less than one-quarter of global oil resources have been produced
• Remaining oil resources can provide about 150 years of supply at current demand

So not to worry. Peak oil will not be reached in your lifetime, or in the lifetime of your children, grandchildren, or greatgrandchildren. Well, that is if these estimates are correct.

Ron Patterson and Guests
1.46K Followers
Ron Patterson is a retired Computer Engineer. He spent five years in Saudi Arabia working for Saudi ARAMCO. He has followed the peak oil story since 2000. Ron started blogging on peak oil in 2013. His web site, PeakOilBarrel.com is one of the most followed blogs on the subject. Ron's interest are geology, biology, paleontology, and ecology. His hobbies are blogging and kayak sailing. Ron is now retired and turned over the administration of the site to Dennis Coyne. Ron is still an active participant on the site and guests now provide timely posts.
Follow
2 Comments
To ensure this doesn’t happen in the future, please enable Javascript and cookies in your browser.
Is this happening to you frequently? Please report it on our feedback forum.
If you have an ad-blocker enabled you may be blocked from proceeding. Please disable your ad-blocker and refresh.