If this is your first time reading a Bitcoin (BTC-USD)(COIN)(OTCQX:GBTC) Value Indicator report, you may want to refer to the original article to get caught up. The long and short of it is that I suggest that we can know something about Bitcoin's market cap by looking at the network fundamentals since they have shown correlation in the past, but this relationship is not guaranteed to be as strong in the future due to changing market dynamics and new technology. 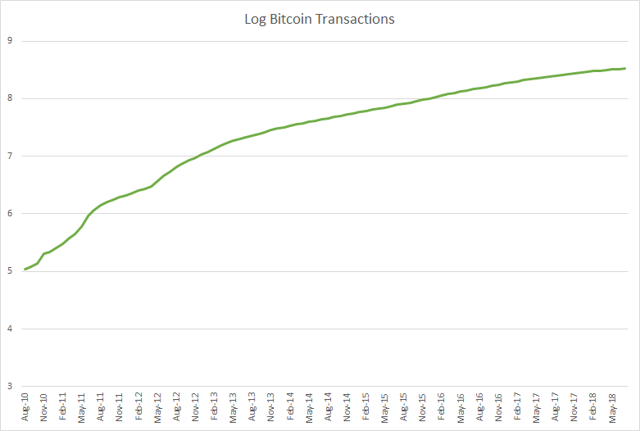 What's interesting about this to me, is that it represents the fourth straight month of growth in monthly transactions. Look at the chart below, and note that March of 2018 shows the low point of transactions. This growth is modest, but I consider it an important sign of life. 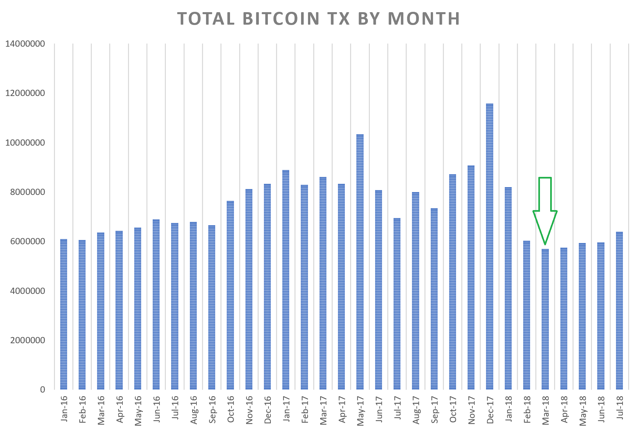 Number of Unique Addresses in Use

The average number of unique addresses in use for the month of July was 438,867. This is a modest gain from June, but still slightly below May. 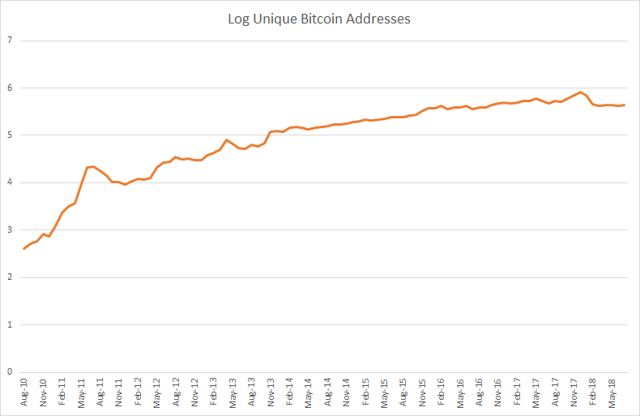 This was the closest predictor of the three. I expect this figure to grow more slowly in the coming months, as mining profits have been squeezed by the combination of low fees (due to lower traffic and increased SegWit usage), increased hash power, and lower bitcoin price.

Combining all three signals into a single chart gives us this.

Because this chart is now covering eight years, I thought it would be nice to present one that shows just the last two years so it's a bit easier to see where we are now. Have a look.

As you can see, the Bitcoin market cap has been over all three predictors since June of 2017. This signal that the market was overheated (the fact the the actual market cap is higher than all three models predicts) came a full six months before the absolute peak in market cap.

As I've said in the past, upgrades to the Bitcoin network are a necessary prerequisite for the next wave of growth. Since the two biggest updates happening now are SegWit (still not fully implemented by the community) and the Lightning network (still in very early stages), that is where we turn our attention now.

Wow, incredible growth in the lightning network over the last 30 days!

Segwit peak usage was up a fraction as well, but I had higher hopes for this figure.

The impact of a Bitcoin ETF

I've seen a lot of news articles making the rounds, speculating about the approval of a Bitcoin ETF. The one that seemed to kick it off was this one from Zerohedge. Since then, we had the (COIN) ETF denied, but there are many others still in play.

I don't know if the suspicions are true, but I have a feeling that with so much money on the line, approval of the ETF will most likely leak out before it happens. Here's how I see the impact playing out.

Investors should be aware that an ETF could also make it easier for market manipulators to cash in on their futures contracts manipulation, as a combination of direct ownership of Bitcoin coupled with ETF ownership could allow for new attack vectors.

I'm very proud to announce that after months of preparation, I have founded a private investment company focused exclusively on cryptocurrencies. I've gotten the green light from SA to create a marketplace where you can join me on our journey. I'll be writing exclusive content for the marketplace, in which I will disclose which cryptocurrencies we're investing in, how we allocate our portfolio, when we rebalance, and much more.

I hope you'll check out "Crypto Blue Chips," launching on September 1st. Thanks again for all the supportive comments. It's been great to be able to share what I've learned, and also to learn from the community as well. With Crypto Blue Chips I hope we can take this to the next level together.

Network activity was mostly positive, as the number of transactions increased for the fourth straight month, and mining hash rate reached new all time highs. Unique addresses gained modestly, but seems to be lagging the other indicators.

Based on the data from last month, the Bitcoin Value Indicator is suggesting that Bitcoin is still overbought. Segwit usage ticked up a fraction, but the Lightning Network increased in channels and value by a massive amount.

ETF approval will be a game changer, and I expect this info to leak out before any official announcement. This will create temporary shifts in valuation models and other cryptocurrencies will try to follow suit.

Hans Hauge
2.54K Followers
I started my career as a factory manager and then switched over to software. Along the way I got a BS in IT, an MBA, and discovered Bitcoin. I started a couple small companies and wrote a few articles about cryptocurrency. Eventually I became the opinion leader on Seeking Alpha for the Bitcoin/Crypto. Currently heading up quantitative strategy at Ikigai.
Follow