The price of Gold today is determined by USD/CNY, period. Any analysis of Gold is basically a review of USD/CNY, plain and simple. Once you understand this, the reason for Gold's performance recently becomes clear.

This is to some degree unfortunate and quite frustrating for owners of Gold such as myself, especially because we don't know what the Chinese plan to do: USD/CNY is a black box. This makes it almost impossible to predict where Gold is headed next.

However, it is also fortunate in my humble opinion, given that China has a vested interest in higher Gold prices long term and an end to the dollar as the global reserve currency. So if you can endure the pain of potentially lower prices in the short term, I expect Gold to go multiples higher long term, Silver even more so.

In order for that to happen, either Gold has to be revalued in yuan terms (XAU/CNY) or the USD/CNY has to fall. So the key issues are: What are the circumstances under which either of these two outcomes could occur, and when? I will delve into that here (skip to 5 below), but first I want to address several queries I have received with regard to the Gold and USD/CNY connection. I have covered these points in prior articles, but they need repeating briefly here:

1. Why is Gold determined by USD/CNY?

Any and all currency exchange rates-and Gold is a currency, not a commodity - can be derived through other related exchange rates. For example:

This a mathematical certainty validated by arbitrage in the marketplace.

Now switch Gold or 'XAU' for EUR and CNY for JPY in the above equation and you get the following:

If one variable is fixed - in this case, Gold in yuan terms, or XAU/CNY - then it is clear that XAU/USD is simply the inverse of USD/CNY. Put simply, if USD/CNY goes up in value, XAU/USD falls, and vice-versa for a drop in USD/CNY. We have seen this recently in the decline of Gold from 1369 in April to as low as 1211 recently and the concurrent rise in USD/CNY, but this correlation has been going on for much longer than that: 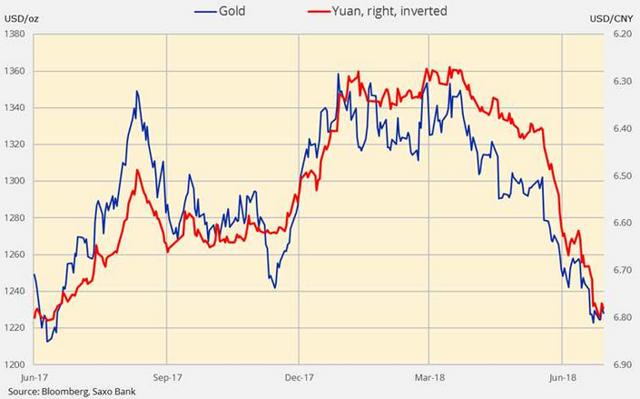 The correlation has just become much more pronounced, as the other variable - Gold in yuan terms, or XAU/CNY - has been pegged in a tighter and tighter range, currently between ~8200-8360. 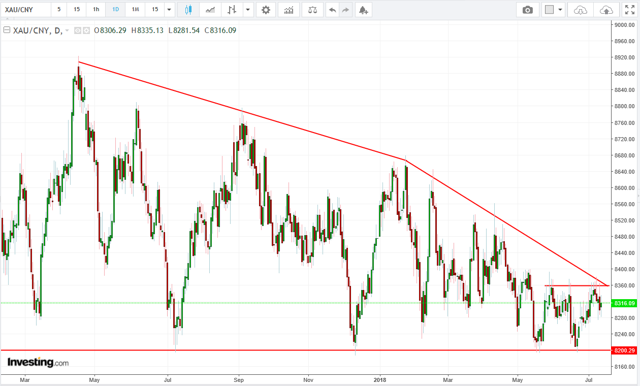 This is why the COMEX has become redundant to some extent and the power of the Bullion Banks to drive or slam Gold prices removed.

2. Why has USD/CNY been rising and why so much?

I believe this is in response to U.S. tariffs. It is no coincidence that the rise in USD/CNY coincided with the first mention of tariffs on Chinese products by President Trump. Nor is it any coincidence that the introduction of 10% tariffs on a range of Chinese products has led to a near 10% rise in USD/CNY - or put another way, a 10% devaluation of the yuan.

The devaluation of the yuan completely undermines the whole purpose of U.S. tariffs on Chinese products, by making Chinese goods cheaper in dollar terms. This offsets the entire increase in price due to tariffs, such that the price in dollars remains exactly the same as it was prior to the tariffs being levied.

This makes sense when you consider that China exports way more to the U.S. than the U.S. exports to China, hence the massive trade deficit that is the catalyst for these tariffs. This means that China can only respond so much with its own tariffs on goods imported from the U.S., so it must use other measures to respond to this escalating trade war. That is exactly what China is doing with the USD/CNY.

China (like Russia) has publicly stated that it wants an end to the dollar as the global reserve currency, replaced by a supranational currency like the IMF's SDR. The Chinese yuan was added to the SDR's basket of currencies in Oct 2016. Pegging the yuan against Gold enables China to say to prospective trading partners that "the yuan is as good as gold." This is a key element of their plan to promote the yuan's use in global trade and foreign investment in China. This would further erode the dollar's use in global trade and FX reserves and increase the yuan's weighting in the SDR basket.

4. Why is a one-off maxi devaluation of yuan by up to 25% bullish Gold, but a day-to-day valuation of 1% that is cumulatively 25% bearish Gold?

Whenever a currency is significantly devalued, it isn't devalued against just one currency, it's devalued against all currencies. For example, the pound cannot devalue against the dollar and stay at the same exchange rate against the euro, as that would also devalue the euro against the dollar. The pound devalues against both of them, leaving the euro/dollar exchange rate the same. The same happens for Gold. Gold in dollar terms would more or less remain unchanged.

In a one-off devaluation whereby the yuan is devalued by 25% against the dollar overnight, it would also have to be devalued against Gold and every other currency by 25%, otherwise Gold would have to rise 25% in dollar terms, and in euros, yen, pounds, etc. Obviously, the U.S. and every other country would not agree to this (seen in scenario B below).

The table below shows what would happen if the yuan was devalued by an additional 15% on top of the ~10% devaluation it has already incurred. Scenario A shows what would happen in practice, leaving Gold unchanged in dollar terms but "Gold and the dollar both rising significantly in yuan terms." Scenario B is presented to show what would NOT happen, but many misunderstand this. Such a devaluation would not be negative for Gold in dollar terms. Gold would remain unchanged as shown in Scenario A.

However, such a maxi devaluation would be extremely bullish Gold in my opinion, in that it would put a cap on USD/CNY. USD/CNY would not be expected to rise any further, as the yuan had already been devalued 25% and therefore USD/CNY was more likely to fall. This makes sense, too, in the event of a U.S. stock market crash caused by such a devaluation, followed by a Fed reversal of monetary policy in the U.S. leading to a generally weaker dollar, including against the yuan. Lower USD/CNY means higher Gold in dollar terms.

By contrast, a day-to-day devaluation of ~1% could go on and on, leading to lower and lower Gold prices over time. Hence, why I consider a massive one-off devaluation bullish but a stealth devaluation daily bearish.

A maxi devaluation is less likely, given China's desire to keep Gold fixed in yuan terms for reasons outlined in #3 above, but not impossible.

Now to the final key question. Understanding that Gold's performance is tied to that of USD/CNY…

5. What could propel USD/CNY lower and Gold higher? And when?

There are 3 possible catalysts for a weaker USD/CNY and higher Gold prices in dollar terms:

We covered the rationale for 'A' above in #4 in the discussion on a maxi devaluation. In terms of when, this could occur almost immediately - or soon after - in response to an escalation of tariffs on much or all Chinese exports to the U.S. to 25%.

Regarding B, I consider a voluntary end to the trade war to be extremely unlikely. Both sides appear intransigent. The U.S. may have genuine grievances with China on many issues, but the Chinese have recoiled at the manner in which U.S. concerns have been presented. There was no negotiation before a gauntlet had been laid down by the U.S., and China, all about saving face, feels it has no option now but to fight fire with fire. The war is more likely to escalate than dissipate. Both sides are playing a game of chicken and waiting to see who blinks first.

For example, yesterday, the Trump administration just confirmed that it is proposing to raise planned tariffs on $200 billion in Chinese imports from 10% to 25%.

Meanwhile, in this article in China's Global Times yesterday, China is clearly unwilling to back down in the trade war with the U.S. and is relying on a U.S. economic and likely financial market meltdown to soften the U.S. stance on trade. This is their end game, and based on their own words, they're going to continue to fight it out until then.

Therefore, the most likely end to the trade war would be involuntary, driven by a U.S. stock market crash followed by a reversal of monetary policy by the Fed to stimulus on steroids. This would be the catalyst for a renewed slide in the dollar, in my humble opinion. A weaker dollar would cause USD/CNY to fall, making Chinese imports more expensive and U.S. exports cheaper, and thereby erode the massive trade deficit between the two countries. This would eliminate the need for tariffs to achieve such an outcome. At the same time, it would also start a massive rally in Gold in dollar terms.

When could such a crash occur? This is something I have covered in several interviews recently, on Twitter and at globalprotraders.com, but suffice to say here that I expect such a crash to occur in October - but it could be slightly sooner or later than that. When a crash in the U.S. stock market occurs and it is followed by a Fed reversal in policy, I believe USD/CNY will fall and we will never see such low prices in Gold (or Silver) again.

Sprott Money
1.8K Followers
Established in February 2008, Sprott Money Ltd. is a leading precious metals wholesale, institutional and retail dealer selling gold, silver and platinum bars, coins and wafers online and over the phone. We offer competitive precious metals storage, IRA, and RRSP services, as well as a comprehensive news site.Sprott Money Ltd. is a privately held company owned by Eric Sprott and operated by Larisa Sprott.
Follow
3 Comments
To ensure this doesn’t happen in the future, please enable Javascript and cookies in your browser.
Is this happening to you frequently? Please report it on our feedback forum.
If you have an ad-blocker enabled you may be blocked from proceeding. Please disable your ad-blocker and refresh.