Editor's note: Seeking Alpha is proud to welcome BP Capital Fund Advisors, LLC as a new contributor. It's easy to become a Seeking Alpha contributor and earn money for your best investment ideas. Active contributors also get free access to the SA PRO archive. Click here to find out more »

A broadly-accepted investing principle is that the stock market is a forward-looking mechanism that prices in the probabilities of events well ahead of their actual occurrences. Granted, the day-to-day influences of short-term oriented market participants (i.e., many hedge funds) often substantially reduce the time frame concerning which events are in focus. Nevertheless, the view of BP Capital Fund Advisors, LLC, for the price of an equity to reflect company or industry-level expectations for the coming 12-18 months, considered "medium-term" by some, is normally quite justified and appropriate. This is particularly the case if a major change is expected to occur during that period.

As it relates to the energy sector, we wrote late last year that numerous ground-level constraints, including takeaway capacity, would effectively limit the growth of US shale oil production, especially in the key Permian Basin. (See: "Extrapolation - When Excel Loses Touch with Oilfield Realities"). This was a somewhat contrarian view at the time. Nevertheless, in recent months, those limitations have become more widely recognized by the market, particularly regarding a shortage of pipeline infrastructure to transport crude and natural gas out of the basin.

The rapid growth of oil production in the Permian from an average level of 2.5 million barrels/day (mmbpd) in 2017 to an estimated 3.4 mmbpd today implies a utilization rate of 98% on the current Permian takeaway infrastructure and an increased likelihood of incremental barrels being "stranded" in basin. The result has been the emergence of a well-publicized large discount for crude priced at Midland, TX (in basin) compared to the price at the primary Cushing, OK hub (the "Mid-Cush" differential), and even larger discount to the export price at the Gulf Coast. This has left Exploration & Production companies (E&Ps) without firm transport (FT) on a major pipeline at a set price temporarily vulnerable to the lower in-basin rate. Also, oilfield service equities have been negatively impacted by expectations for a slower pace of well completions during this period of insufficient pipeline capacity. 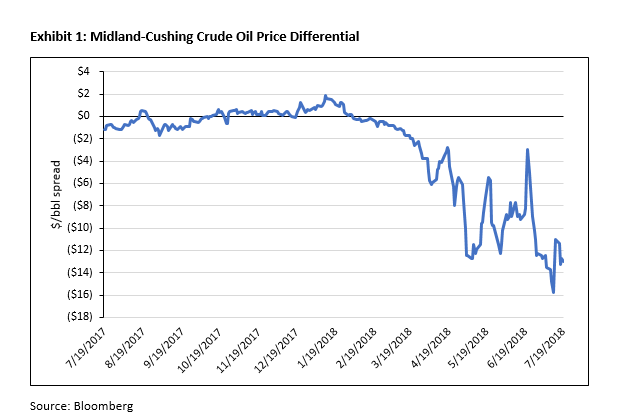 Since E&Ps without FT are likely to logically slow their production, most analysts expect well completions in the Permian to fall by 10-25% in 2019. The Permian rig count may also fall but probably by a smaller amount since it is easier and less costly for a producer to dismiss a fracking crew than to lay down a drilling rig. One consequence of this should be a further rise in the already large number of drilled but uncompleted wells (DUCs) in the Permian. These DUCs are even often referred to as "underground inventories," essentially representing a readily-accessible backlog of production waiting to be tapped.

With the potential for price differentials to remain wide and even expand considerably in upcoming quarters, we appreciate the risk to short-term earnings estimates for many Permian-exposed oilfield service companies as well as for E&Ps without FT. For services, these include companies that specialize in pressure pumping and other well-head services that occur during the completion of the well, in addition to corporations that supply completion-related equipment or materials (e.g., fracking sand). Still, we see a large buying opportunity for many depressed oil equities that are well positioned once the Permian pipeline bottleneck issue is resolved.

In particular, service companies that have sold off with the peer group, yet have high-quality customers and have not taken on excessive debt levels, seem the most attractive. Such companies should not only benefit ultimately from a boost in demand for their services but also may report earnings that are more resilient in the near term than expected. Separately, as it relates to E&Ps exposed to the large Midland-Cushing price differential, we emphasize that a decrease in near-term cash flows should only have a small impact on net present value calculations. In most cases, the value of the producers' unaffected outer year cash flows should still represent the bulk of their firm value. 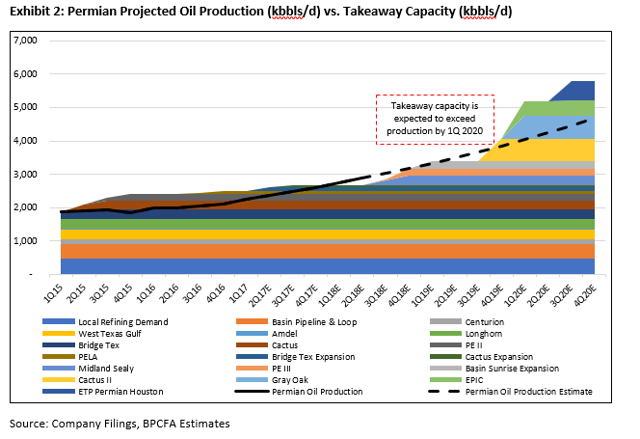 As shown in the exhibits above, the shortage in Permian takeaway capacity is expected to be substantially reversed by pipelines added in late 2019/early 2020. A substantial portion of this build-out is stemming from three large-scale pipelines (Cactus II, EPIC, and Gray Oak), which combined will add 1.8mmbpd of takeaway capacity. Even considering some normal construction delays (3-6 months), it is evident that the sheer size of such pipelines should result in the basin having more than an adequate amount of takeaway capacity even under the most aggressive production forecasts for the next several years. In fact, according to East Daley, at current initial production (IP) rates, it would take roughly 1,200 well completions per month to fully fill the expanded capacity within six months of the new pipelines coming online. For perspective, East Daley says there were an estimated 669 Permian completions for the month of May, while the Permian averaged about 415 completions per month in 2017. Under this environment, we expect there to be robust demand for completion-related services to tap the immense resources of the Permian Basin, particularly from completion-ready DUC wells. We would also expect Permian price differentials to fall back to normal, or below normal, levels, rewarding oil producers that didn't panic and lock-in FT at high rates.

To summarize, while investor sentiment for completion-related equities appears quite low today, we expect this to dramatically turn toward the end of this year and in early 2019, as the market begins to discount the improving outlook for such companies. As often the case, when a myopic, short-term focus is the major influence in equity values, investors that are able to take a longer-term perspective should ultimately be rewarded.

The information provided does not constitute investment advice and is not an offering of or a solicitation to buy or sell any security, product, service, or fund, including the fund being advertised.

All information provided herein is for informational purposes only and should not be relied upon to make an investment decision.

The charts, tables, and graphs contained in this document are not intended to be used to assist the reader in determining which securities to buy or sell or when to buy or sell securities. The projections or other information in this blog post regarding the likelihood of various future outcomes are hypothetical in nature and do not guarantee any particular future results. Additional information is available upon request. Unless otherwise noted, the source of information for the charts, graphs, and other materials contained herein is BP Capital Fund Advisors, LLC.

This document may contain forward-looking statements and projections that are based on our current beliefs and assumptions and on information currently available that we believe to be reasonable, however, such statements necessarily involve risks, uncertainties and assumptions, and prospective investors may not put undue reliance on any of these statements.