During a recent webinar, we examined the current volatility in emerging markets debt and whether the rout is overdone or if more pain is coming. We compiled a selection of questions that emerged from the webinar and answered them in the following Q&A.

How does valuation in emerging markets compare today relative to history?

Following the recent selloff, spreads and yields of certain emerging markets debt sectors are now higher than, or in-line with, historical averages. For example, local currency bond yields are now back above 3-year and 5-year averages and at their 10-year average, which includes both the financial crisis and taper tantrum over the period. Emerging markets corporate high-yield spreads have risen significantly over the past three months, and have approached 3-year and 5-year averages, but are still far below the 10-year average, reflecting much improved credit conditions globally.

One area we think is worth attention from a valuation perspective are bonds denominated in local currencies. Real interest rates, which are adjusted for expected inflation, are substantial due to the high nominal yields and inflation levels that remain controlled, in general. In comparison, developed markets real interest rates remain negative or near zero.

Further, many currencies are near their lowest level versus the U.S. dollar in over a decade. On a real effective exchange rate basis, which accounts for different price levels versus a country's trading partners, current levels are also attractive relative to historical averages. Even after rallying somewhat in 2016, emerging markets currencies (EMFX) have not come close to the levels experienced in 2010/2011. 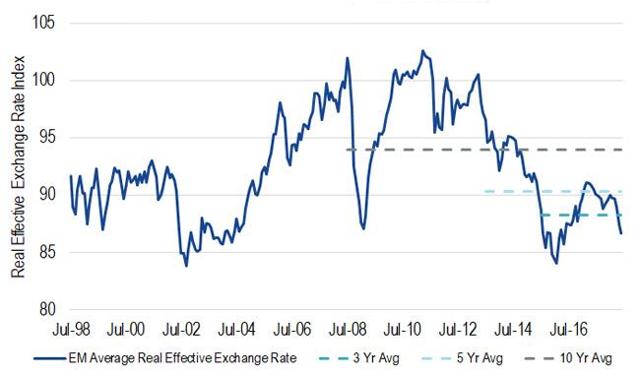 Source: J.P. Morgan, Bloomberg and VanEck as of 6/30/2018. Real exchange rate is the ratio of the price level abroad and the domestic price level, where the foreign price level is converted into domestic currency units via the current nominal exchange rate. EM Average Real Effective Exchange Rate is a weighted average of the countries currently represented in the J.P. Morgan GBI-EM Global Core Index (the "Index"), using country weights of the Index as of June 30, 2018. Past performance is not indicative of future results. See important disclosures and index definitions at the end.

Looking at current levels versus history can be informative, but what's more important is whether an investor is being compensated adequately for the level of risk taken. Things can change over time, and that is certainly the case for emerging markets. Emerging markets have evolved significantly over the past decade or two. Many countries have enacted structural reforms, shifted their funding structure to local currency away from hard currency, and have credible central banks that are pursuing conventional monetary policies. In these cases, a lower yield or spread level may be justified, reflecting the improvement in a country's risk profile.

Why should I roll the dice and take a chance on getting burned again by an emerging markets nosedive?

We believe that emerging markets debt can play a role within a diversified portfolio, but in general should not dominate a portfolio. Allocations should be sized to where an investor is comfortable, and managed so that a portfolio does not become overallocated to any single asset class. The typical advantages of emerging markets debt are its historically lower correlation to other asset classes, higher yield potential, and diversification opportunities. However, the higher volatility is a primary risk.

Experienced emerging markets investors are no stranger to volatility and the effects of sudden and sometimes extreme shifts in sentiment. As has always been the case, emerging markets yields go up in times of stress (versus yields of safe haven1 countries, which tend to go down when markets sell off) and currencies weaken. It can be dangerous to assume that "this time is different," and this dynamic is likely to continue to be a primary characteristic of emerging markets. Selloffs can be indiscriminate, and may present value to investors who can be tactical and disciplined in their approach.

At the same time, emerging markets fundamentals are generally supportive, which was not necessarily the case in past selloffs. Economic growth continues to be higher than developed markets, and the growth differential is expected to increase. Total debt as a percentage of GDP is much lower versus heavily indebted developed markets, and external debt to GDP is lower today compared to 20 years ago. From a demographic perspective, the story in emerging markets is more supportive for economic growth compared to the situation in many developed markets. 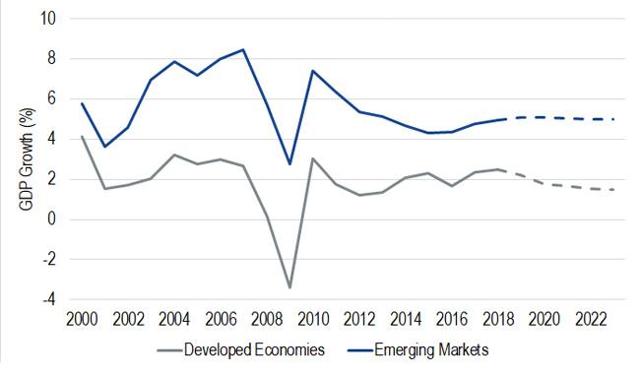 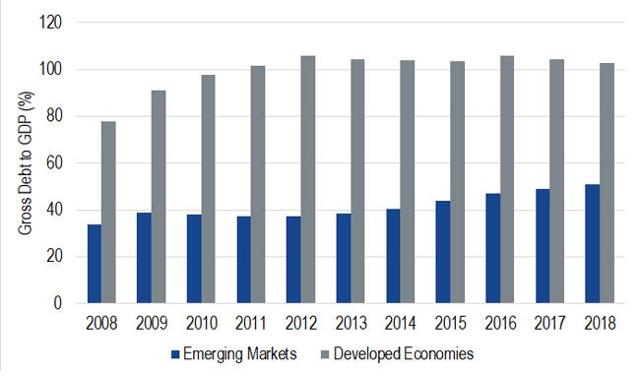 Source: IMF as of 6/30/2018. Dashed portion of lines represent forecasts. Past performance is not indicative of future results.

We believe the recent selloff may present opportunities for investors who can withstand the volatility in return for the portfolio diversification and yield potential the asset class provides. For investors looking to temper the volatility associated with local currencies, a blended approach that combines local and hard currencies and includes both corporate and sovereign bonds may be an attractive alternative to an all local currency allocation.

How do you see global political developments impacting emerging markets?

As a general matter, market-friendly policies, which typically promote growth are good for emerging markets, which tend to benefit from global trade and higher commodity prices. On the other hand, policies, which restrict global growth, can have an outsized negative impact on emerging markets, and the increasing threat of protectionism and restrictions on free trade would fit into that category.

Looking at specific countries in emerging markets, there are also political and policy developments which are creating both risks and potential opportunities. For example, in Turkey, we have seen poor policy decisions, an increasingly powerful administration that is not viewed as market-friendly, and a central bank whose credibility has recently been questioned by the market.

On the other hand, Argentina shares some similar economic issues as Turkey but has a more reform minded government that has taken action to address the current situation, although that has not yet been rewarded by the market. Brazil is an example of a country where politics is notably a risk due to the upcoming elections.

Contagion risk has historically been a concern for emerging markets, but the idiosyncratic issues of certain countries generally has had less spillover to other emerging markets compared to what was experienced 20-30 years ago. One reason for the increased stability is that emerging markets have much less external debt, and are therefore less vulnerable to external shocks. 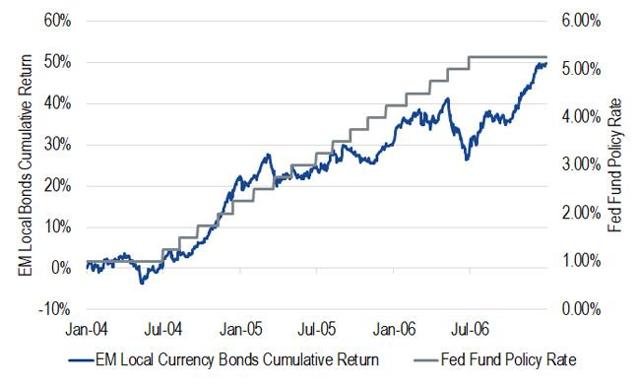 Source: J.P. Morgan as of 6/30/2018. EM Local Currency Bonds represented by the J.P. Morgan GBI-EM Global Diversified Index. Past performance is not indicative of future results. See important disclosures and index descriptions at the end.

For emerging markets local currency bonds to improve, does the U.S. dollar need to weaken?

A weaker U.S. dollar would likely benefit emerging markets bonds denominated in local currencies. We believe that a reversal of recent weakness is possible, if more attractive valuations and improved fundamentals attract flows back into the asset class. However, we don't believe that the U.S. dollar needs to necessarily weaken for the asset class to provide attractive returns. Even if the U.S. dollar simply stops strengthening, emerging markets local currency bonds could do well.

Further, the yield curve is currently quite flat, with the market pricing in additional rate hikes into the short end of the curve. If the Fed doesn't hike rates as much as market participants are generally expecting, the U.S. dollar rally could deflate quite quickly. New barriers to trade, as well as increasing concern over U.S. fiscal and budget deficits, could also cause a reversal of U.S. dollar strength.

1A safe haven is an investment that is expected to retain or increase in value during times of market turbulence.

Indexes are unmanaged and are not securities in which an investment can be made. Index returns do not reflect a deduction for fees & expenses.

J.P. Morgan GBI-EM Global Core Index: tracks bonds issued by emerging markets governments and denominated in the local currency of the issuer. The weighting scheme provides additional diversification by more evenly distributing weights among the countries in the index. Countries are capped at 10% and floored at 3%.

J.P. Morgan GBI-EM Global Diversified Index: tracks emerging markets local government bonds that are accessible by most foreign investors. The weighting scheme provides additional diversification by more evenly distributing weights among the countries in the index. Countries are capped at 10%.

The information herein represents the opinion of the author(s), but not necessarily those of VanEck, and these opinions may change at any time and from time to time. Non-VanEck proprietary information contained herein has been obtained from sources believed to be reliable, but not guaranteed. Not intended to be a forecast of future events, a guarantee of future results or investment advice. Historical performance is not indicative of future results. Current data may differ from data quoted. Any graphs shown herein are for illustrative purposes only.

This content is published in the United States for residents of specified countries. Investors are subject to securities and tax regulations within their applicable jurisdictions that are not addressed in this content. Nothing in this content should be considered a solicitation to buy or an offer to sell shares of any investment in any jurisdiction where the offer or solicitation would be unlawful under the securities laws of such jurisdiction, nor is it intended as investment, tax, financial, or legal advice. Investors should seek such professional advice for their particular situation and jurisdiction.

Please note that Van Eck Associates Corporation serves as investment advisor to investment products that invest in the asset class(es) included in this commentary.

Diversification does not assure a profit or protect against a loss. Debt securities carry interest rate and credit risk. Interest rate risk refers to the risk that bond prices generally fall as interest rates rise and vice versa. Credit risk is the risk of loss on an investment due to the deterioration of an issuer's financial health. Securities may be subject to call risk, which may result in having to reinvest the proceeds at lower interest rates, resulting in a decline in income. International investing involves additional risks which include greater market volatility, the availability of less reliable financial information, higher transactional and custody costs, taxation by foreign governments, decreased market liquidity and political instability. Changes in currency exchange rates may negatively impact a fund's return. Investments in emerging markets securities are subject to elevated risks which include, among others, expropriation, confiscatory taxation, issues with repatriation of investment income, limitations of foreign ownership, political instability, armed conflict and social instability.

Investing involves risk, including possible loss of principal. Bonds and bond funds will decrease in value as interest rates rise. An investor should consider investment objectives, risks, charges and expenses of any investment strategy carefully before investing. No part of this material may be reproduced in any form, or referred to in any other publication, without express written permission of VanEck.

Follow VanEck and get email alerts
+
Add a comment
Disagree with this article? Submit your own.
To report a factual error in this article, click here.
Your feedback matters to us!