Advisors have a couple of ways they can protect themselves from lawsuits when they select target funds. They can try to select the best fit to beneficiary needs and wants (known as substantive prudence), or they can copy what other advisors are doing (known as procedural prudence). Neither approach guarantees against lawsuits. We discuss your choices in the following so you can be the judge.

Substantive Prudence: Beneficiaries Want to be Safe, and Should Be. Consultants Agree

Most assets in TDFs are there by default, so the common demographic of all TDF beneficiaries is lack of financial sophistication. Financially sophisticated participants make their own investment choices. So what do these beneficiaries want?

On behalf of MassMutual, Greenwald & Associates, an independent research firm, conducted an online survey that included 804 pre-retirees and 801 retirees. Respondents were drawn from ResearchNow’s online panel. To qualify for the survey, all respondents had to be at least 40 years old.

Pre-retirees were required to have a household income of at least $40,000, work full-time for a private sector employer, and be participating in that employer’s DC retirement plan.

Retirees were required to have total investable assets of at least $100,000. They had to be retired from a private sector employer and participating in that employer’s DC retirement plan at the time of retirement.

One of the most informative tables in the report shows beneficiary preference for safety over growth in the “Risk Zone” that spans the ten years before and after retirement: 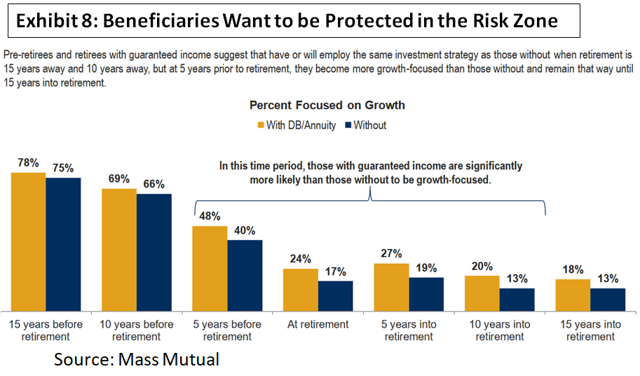 At 15 years to the target date, the vast majority (75%) want growth over safety, but this preference shifts dramatically so that only 17% prefer growth over safety at retirement. Also shown in the graph, those with another source of income, like a DB plan, opt for somewhat more growth, obviously because their other assets are safe.

The preferences in the table above can be used as proxies for preferred equity allocations along the glide path. The following graph shows these preferences in contrast to the industry practice (Vanguard) and a substantive prudence index (SMART) . 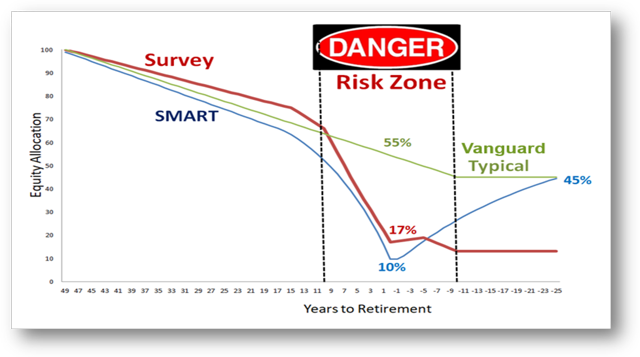 Consultants agree. Pacific Investment Management Company (PIMCO) conducted another survey entitled the “2018 12th Annual DC Consulting Support & Trends Survey”, which they describe as follows: Our 2018 survey captures data, trends and opinions from 77 consulting firms across the U.S., the highest number in the 12-year history of the survey. These firms advise over $4.4 trillion in U.S. DC assets, accounting for almost 60% of all U.S. DC assets.

One of the questions that the survey addresses is loss avoidance at various dates along the TDF glide path. The responses are summarized in the next exhibit. 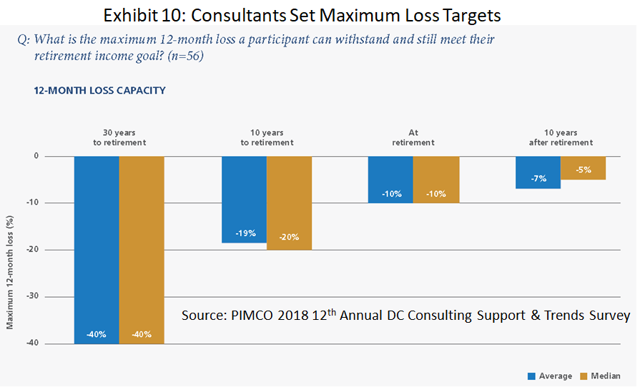 Consultants want TDFs to defend against losses of 10% or more at the target date, and to become even more defensive beyond the target date, defending against losses of 5% or more. These objectives argue for very conservative allocations, assuming that the objective is to have a low probability of the indicated loss. For example, a 10/90 stock/bond mix has a 95% probability of protecting against a 5% loss in a year.

But the fact is that most beneficiaries in TDFs are not safe near the target date because advisors are not choosing safe TDFs. The typical TDF choice is 55% in equities at the target date. The average 2010 fund had 55% in equities in 2008 and lost 30%, plus risk has increased since. Advisors are not choosing safe TDFs because they believe procedural prudence will protect them from lawsuits, as discussed in the next section.

Procedural Prudence: An Oligopoly is Born

Advisers believe that (1) any Qualified Default Investment Alternative (QDIA) will do, and (2) you can’t wrong with the Big 3 – Vanguard, Fidelity, and T. Rowe Price -- because everyone else is using them. This is a breach of the Duty of Care that, like our duty to protect our children, holds fiduciaries responsible for harm to our dependents that should have been prevented. Fiduciaries are duty bound to seek the best TDFs for their beneficiaries, but this is not happening.

This practice began with laziness and familiarity that led advisers to use the plan’s recordkeeper, and evolved into today’s preference for the Big 3, as shown in the following picture: 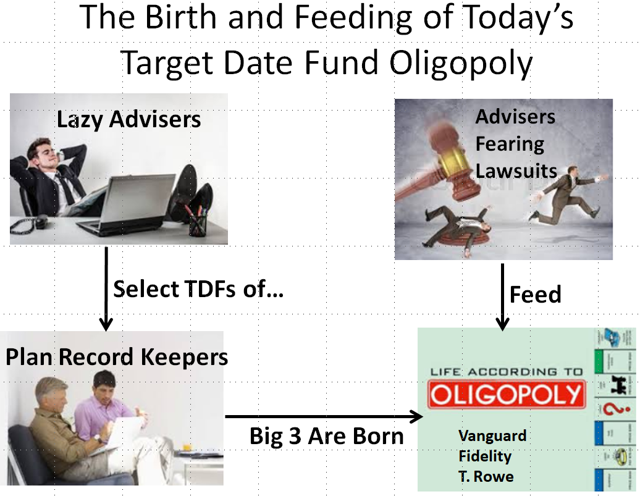 The details of the Oligopoly are shown in the following picture: 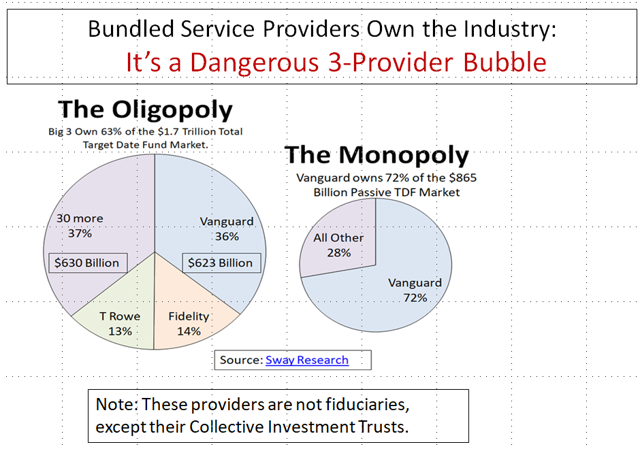 The existence of a TDF oligopoly is a smoking gun confirming the lack of vetting. This would be fine if the Big 3 provided the best TDFs, but they do not. Consequently, choosing the oligopoly is not a safeguard against lawsuits, and very well could be the basis for lawsuits because of the breach of the duty of care. On the other hand, advisors could be sued for choosing safe TDFs because they are different, and have in fact materially underperformed the oligopoly in the past decade. There has been a performance cost associated with prudence in the past decade because imprudent risk has been rewarded.

Lawsuits are unlikely in the absence of harm. No harm, no foul. The next market correction could see the next wave of TDF lawsuits. Time will tell. We will eventually come to know which approach has actually protected advisors from being sued for their TDF selection practices.

Ronald Surz
1.96K Followers
Please visit https://babyboomerinvesting.show o I'm author of 3 books: Baby Boomer investing in the Perilous Decade of the 2020s, & 2 books on target date funds I’m smart with 2 Masters degrees and 55 years in financial consulting. I’m semi-retired, and prefer helping my fellow baby boomers rather than playing golf. I’m worried that our country, & most others, is playing with fire in its money printing. I’m here to help – that’s my legacy. spaceI help investors deal with life’s investment challenges, with the objective of enjoying a comfortable long retirement. I’m passionate about questioning and improving upon entrenched stale practices like jamming everyone into cookie cutter model portfolios. That's why I produce the Baby Boomer Investing Show live on Youtube and Facebook every other Tuesday at 10:00 PST. Watch live or replay by searching for "Age Sage Robo" on Facebook or Youtube. Please watch and support our Boomer Investing Show on Patreon ( https://www.patreon.com/user?u=35204315&fan_landing=true ) and visit our SA Blog at https://seekingalpha.com/account/authorboard/instablog . As president of Age Sage Robo (please Google), and CEO of GlidePath Wealth Management, I’m responsible for model development using my patented process . I have more than 50 years of financial service experience and hold a U.S. Patent for a time-tested glide path investment process that helps investors navigate the complicated financial decisions they face as they accumulate and preserve assets for their retirement years. Age Sage & GlidePath use this process to build Target Date, Special Purpose, and Life Span Portfolios that are tailored to the specific requirements of clients. My extensive financial career began at A.G. Becker Pension Consultants where I advised on the investment policies of several trillion dollars of retirement plan assets. After Becker I started my own consulting firms that developed innovative services for investors and the financial advisors who serve them. I’ve earned a BS and MS in Applied Mathematics from the University of Illinois and an MBA in Finance from the University of Chicago. I am author of the book "The Remarkable Metamorphosis of Target Date Funds" and co-author of "The Fiduciary Handbook for Understanding and Selecting Target Date Funds"
Follow

Additional disclosure: I am a sub-advisor of the SMART TDF Index and the originator of the 1st and only Robo Analyst that integrates Age with Risk. Please visit my Blog at https://seekingalpha.com/author/ronald-surz/instablogs#instablogs

Age Sage builds better asset allocation models that help Baby Boomers transition through the Risk Zone that spans the 5-10 years before and after retirement. Implementation of these models can be done for less than 6 basis points. Boomers are poised for a sucker punch that they’ll never shake off.