‘Growth’ Still Has Some Gas Left in the Tank 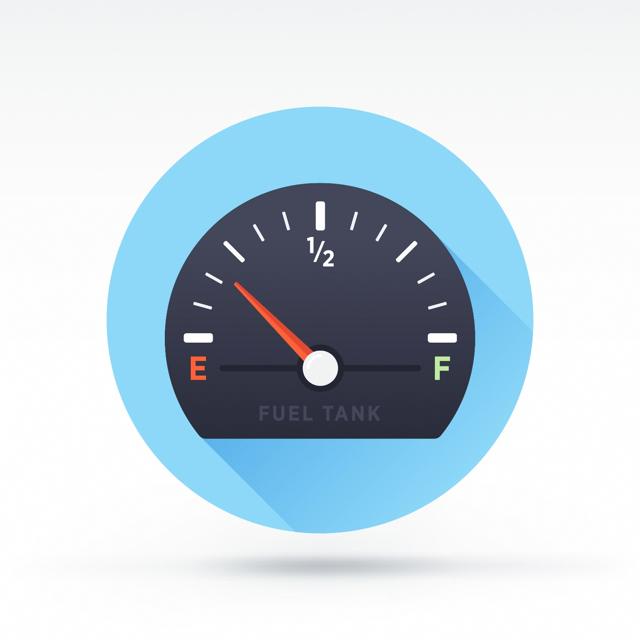 As we write this July 2018 Market Commentary, the U.S. technology and communication sector, which had sharply reversed following poor 2Q earnings releases from FAANG bellwethers Netflix (NFLX) and Facebook (FB), will likely be rescued by a strong month-end earnings release from Apple (AAPL). Indeed, despite strong releases from other large growth bellwethers like Microsoft (MSFT) and Amazon (AMZN), investor sentiment had swung suddenly from ‘growth’ style of investing to ‘value’ style of investing.

Large cap value, led by financials, benefited from a steepening U.S. Treasury yield curve that saw the 10-year Treasury yield rise from an intramonth low of 2.82% to as high as 2.97% following an apparent monetary policy shift by the Central Bank of Japan (the 10-Year just reached 3% as we write this commentary). It appears that the narrative had changed from one that favored trade-insulated U.S. small caps (Figures 1a and 1b), U.S. growth technology, and the U.S. dollar to one that favored late cyclical value and financials (Figure 2). Small caps reversed their strong 2Q performance as trade tensions seem to be thawing between the U.S. and Europe/China (tensions renewed following a breakdown in U.S./China trade discussions with the Trump administration now threatening to impose 25% tariff on $200 billion of Chinese imports). 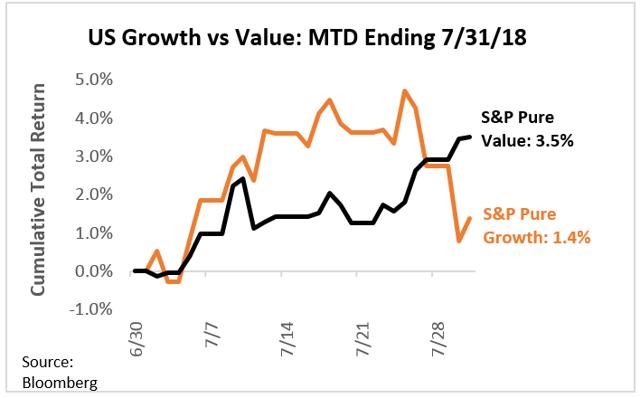 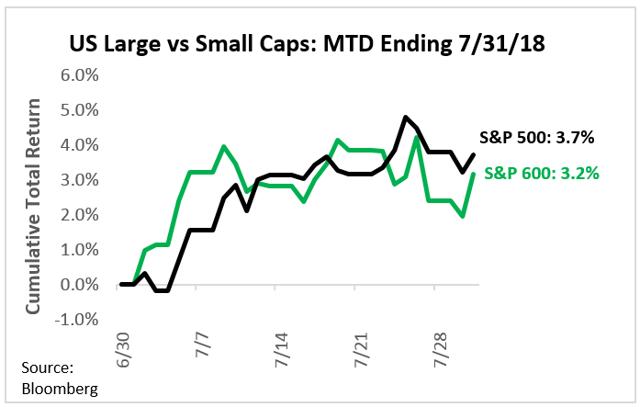 Despite grousing from long-suffering value-driven investors, U.S. large cap technology growth, proxied by the Nasdaq 100, remains the best house in a low nominal global growth neighborhood. Based on Bloomberg earnings estimates (Figure 3), Nasdaq 100 boasts one of the most attractive earnings picture for the next year versus the broader U.S. market and the rest of the world. And despite some high-flying technology stocks not meeting lofty growth expectations, analysts continue to raise their earnings estimates for the Nasdaq 100, as well as for the broader U.S. large cap market even with the headwinds of a strong U.S. dollar.

Figure 3 – From an Earnings Standpoint, the U.S. Market Remains the Most Attractive House on the Block 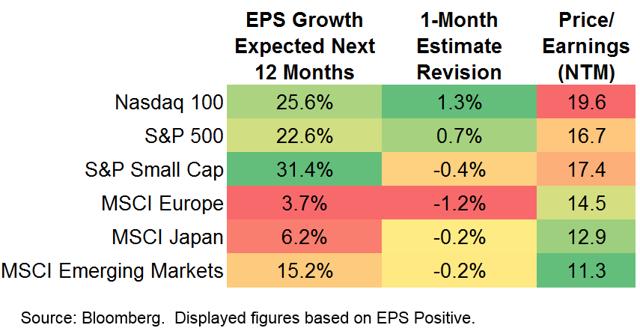 Yes, the U.S. earnings picture is partially goosed by U.S. tax legislation passed late last year, but year-over-year revenue growth for the S&P 500 reached 8.4% at the end of July. Strong U.S. corporate revenue growth will help drive core earnings growth over the next year. As we’ve stated multiple times, market valuations do not grow/shrink in a vacuum but rather track earnings growth (or lack thereof) over the long run.

Right at the moment Facebook disappointed with its 2Q earnings release resulting in a 20% drop in its stock price, we witnessed a quite significant rotation from ‘growth’ style of investing to ‘value’ style. Charlie McElligott, Head of Cross-Asset Strategy at Nomura, observed that the 3-day rotation from growth to value represented a “4.3 sigma event” and was the largest move since the Lehman Bankruptcy in 2008. Caught in the crossfire was ‘momentum’ which suffered from the sudden sell-off in growth technology, while ‘high dividend’ and ‘value’ factors, which had been lagging for the better part of the month, ended up leading all other factors (Figure 4).

Figure 4 – From Laggards to Leaders, Value and Dividend Factors Outperform in July

Perhaps we were a little ‘early’ (wrong?) in our call for a reversal in the valuation disparity between Nasdaq 100 and U.S. small cap value as we had expected some convergence in profitability (return on equity) as the late cycle unfolds. However, the profitability gap has only widened since our call (Figure 5). Until small cap value companies improve their profitability profile or competition eats into the high ROEs enjoyed by large cap tech, small cap value will continue to underperform large cap tech. Assuming the fast money has largely exhausted itself, there may be some more gas left in the Large Cap Tech tank. 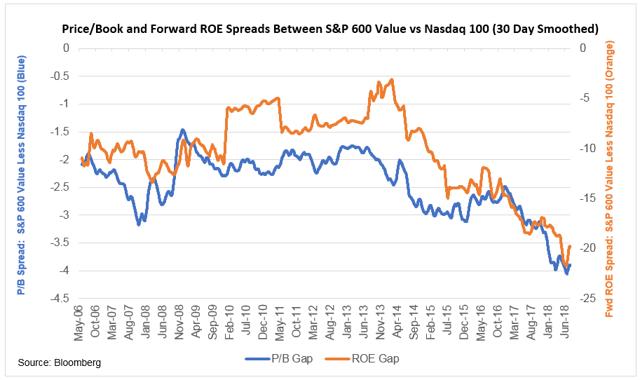 What will crack the leadership of U.S. markets? It comes down to meeting expectations. Will the U.S. economy continue to grow as expected by the Trump administration? Will U.S. companies continue to grow earnings at levels being reset higher by Wall Street analysts? And will the rest of the world regain its growth footing and exceed expectations that have been lowered throughout the year? There are some fissures in the U.S. growth story such as the underperformance of US homebuilding stocks amidst weaker housing data as well as a mild sell-off in industrial commodities such as oil and copper. But with strong employment and tax cut tailwinds, the U.S. economy has a better growth picture versus the rest of the world.

The Rest of the World Outlook Still Driven by China

Whereas the bar for earnings growth is being set higher in the U.S., it’s being set lower overseas. The earnings picture for the rest of the world looks less encouraging, partly due to heightened trade war rhetoric but also related to signs of slowing economic growth in China. The lower equity market valuations for Japan and Europe relative to the U.S. continue to be explained by this anemic earnings growth picture. Partial blame can be assigned to China, the 2nd largest economy in the world after the U.S. The dip in global manufacturing sentiment has tracked China (Figure 7).

Despite China implementing short-term stimulus measures such as lowering bank reserve requirements, lowering corporate taxes, and increasing state-level infrastructure spending, the country continues to wrestle with its enormous private and public sector debt levels. Chinese bank assets have reached nearly half of world GDP, so the Chinese financial system can ill afford a slowdown that would make such a debt burden unmanageable. And China’s private debt sector is beginning to feel the strains of its debt levels which are now being compounded by the government’s goal of shoring up its state-owned enterprises (SOEs).

The trade dispute with the U.S. puts further Chinese economic growth at risk and is putting more pressure on the USD/Yuan exchange rate (Figure 8). China (nor the rest of the world) can ill afford a runaway maxi-devaluation of its currency stemming from capital flight, so the government must figure out a way to maintain sustainable growth (i.e. growth not highly reliant on debt fuel) while contending with trading partners who want to reassess terms of trade. Should China take too extreme of a hardened position, foreign capital and businesses may leave the country, striking a blow to the government that wants to attract foreign capital rather than drive it away.

As we write this, the 10-Year U.S. Treasury Yield rose above 3% for the first time in two months as investors await Federal Reserve comments following the August meeting as well as anticipating a large supply of new issuance to fund the U.S. budget deficit. The U.S. Treasury had been trading in a narrow trading range but then sold off along with global sovereign debt following a policy shift announced by the Bank of Japan. It wasn’t clear why global bond yields rose (Figure 9), as some attribute the sell-off to technical pressures following the BOJ statement. 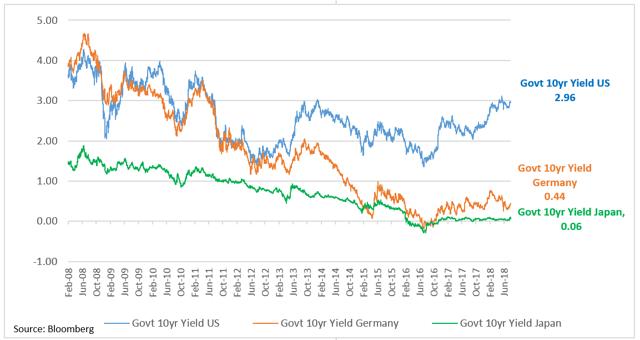 The Bank of Japan tried to signal more confidence by allowing for long-term rates to creep up to 0.10% but largely stayed committed to its ultraloose monetary policy. BOJ Governor Kuroda acknowledged that Japan would not reach 2% inflation anytime soon. Kuroda’s statement put selling pressure on Japanese banks, a large reason why Japan underperformed the broader markets in July.

Over the last month, we’ve published two blog posts ( here and here) warning about the growing imbalances and increased risks in high yield loans and lower investment grade credit. July presented a relief rally for both, but the risks remain for corporate credit especially if there is a downturn in the current business cycle.

Heading into the fall, the focus will shift towards the Federal Reserve, where the Fed is expected to raise rates by another 0.25% at the September meeting followed by another rate hike in December. Investors will pay particular to any changes in the forward guidance given difference between what the market is expecting (one rate hike in 2019) versus Fed projections (at least two hikes in 2019). For the time being, trade dispute headlines will continue to dominate day-to-day volatility; hopefully, the excessive posturing on both sides will lead to an acceptable outcome.

The above is the opinion of the author and should not be relied upon as investment advice or a forecast of the future. It is not a recommendation, offer or solicitation to buy or sell any securities or implement any investment strategy. It is for informational purposes only. The above statistics, data, anecdotes and opinions of others are assumed to be true and accurate however 3D Asset Management does not warrant the accuracy of any of these. There is also no assurance that any of the above are all inclusive or complete.

Past performance is no guarantee of future results. None of the services offered by 3D Asset Management are insured by the FDIC and the reader is reminded that all investments contain risk. The opinions offered above are as August 1, 2018 and are subject to change as influencing factors change.