Historically, this opportunity was only available to wholesale energy traders. As a result, the Canadian crude market is something that is not well understood. However, given this is the largest foreign supply to the U.S. (greater than Saudi Arabia), the reality is that its importance and influence is undeniable, and it represents an opportunity for a range of global investors.

1. Canada is the largest foreign supplier of oil to the U.S. at more than 40% of all US imports. This is more than all OPEC producers combined and roughly three times what Saudi Arabia itself supplies. Almost all Canadian oil production goes to the US. See below: 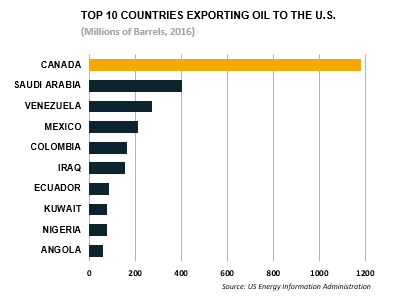 2. Canada has the third-largest oil reserves in the world, only behind Venezuela and Saudi Arabia. 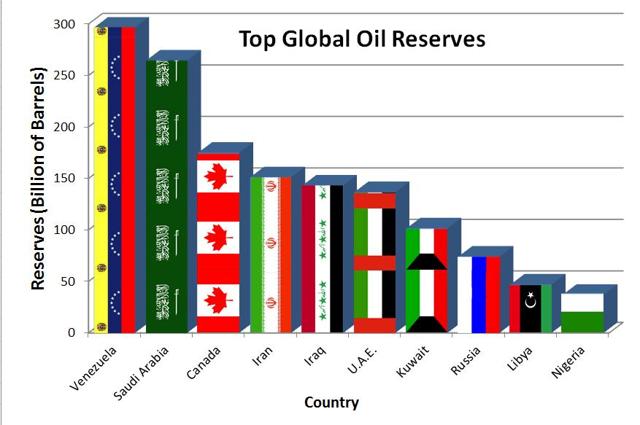 3. Canada ranks as the most socially progressive country of the top global oil producing nations. Think where you would vacation.

4. While Canada produces many types (grades) of crude, the "heavy sour" grade is the dominant grade. Most Canadian producers, which are some of the largest in the world, have heavy oil production linked to WCS.

Reasons for the discount

Given WTI is considered "light-sweet" and Canadian Crude is predominantly "heavy-sour," this is often the source of confusion that causes both controversy, misunderstanding and opportunity. As implied by the name, "heavy-sour," one cannot help but to think in negative terms and thus justify the lower price. However, Canadian crude is discounted primarily due to transportation constraints and costs, not the grade. Other global heavy grades trade much closer to WTI. See below:

1. There's huge global demand for heavy crude for refining. According to the Canadian Association of Petroleum Producers, the US Gulf is now the world's largest heavy oil refining cluster, and refineries on the Gulf and Midwest have been purpose built or retooled for heavy crude. In a report from IHS Markit, by 2020 Canada could supply a full one-third of its refining market. As a result, since 2008 US imports of light-sweet have dropped to almost zero.

One Third of the U.S. Gulf Coast Heavy Oil Market Could Be Supplied by Canada by 2020, IHS Markit Report Says.

2. Refineries get better margins from heavy-sour crude and refinery demand is increasing. Per the graphic below, refineries are now able to manage sulfur content and produce a wider range of products targeting higher margins.

"Canadian crude is extremely important for the refineries in the Gulf Coast of the U.S. With the declining supplies from Mexico and Venezuelan heavy crude… the need for Canadian Crude will only increase further."

4. Oil is moved from Canada to the U.S. by pipeline or rail at significant cost ($8-21 per barrel) while the cheapest method of oil transport is by oil tanker at only a few dollars per barrel. This is something Canada is getting closer to, which may change the balance of global oil supply and movement. The result may be substantially higher prices for crude oil from Canada.

While most people have heard of WTI, this is not the benchmark for the bulk of oil produced in Canada and sent to the US. The largest commercial oil stream in Canada is WCS, which is a heavy oil blend. Western Canadian Select combines a number of types of oil and is used by producers for pricing as a discount, or deduction from WTI.

As such, we reference a more simple benchmark that accurately reflects the commodity price, risk and volatility of Canadian oil. The CCI, or Canadian Crude Index, was created to compare the price of Canadian heavy crude to that of WTI in US dollars per barrel. Given the discount and the importance, and the ease of observing and tracking it through the CCI, this benchmark creates transparency and makes understanding the opportunities more obvious. More information at Commodity Indices. 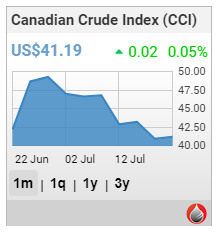 Why does this benchmark matter? When you trade Canadian crude, you are arguably trading the barrel that balances the US market, is most competitively priced, and the most important for setting prices for all other North American crude grades.

Given the U.S. dependency on Canadian crude supply and the massive demand, Canadian crude is extremely important to the pricing of crude oil in North America and has an important influence on the price of WTI.

If you or a client are looking for an edge in oil, consider the following:

1. Canada is the largest supplier of oil to the US, more than three times Saudi Arabia and all of OPEC combined.

2. Oil from Canada is critical to US energy security and in setting the price of all crude in North America.

3. The discount for Canadian heavy oil is primarily because of transportation costs to US refineries.

4. Heavy oil is demanded globally because refineries can make greater margins on the value-added products.

5. Until the launch of the CCX ETF, trading heavy oil was only available to wholesale (producers and banks) energy traders.

6. While highly correlated to WTI, the discounted price means material outperformance and more volatility in bull and bear markets. Since the oil lows in January of 2016, Canadian Crude ETF products have outperformed WTI-based ETF products. This is an opportunity for market speculators and investors. 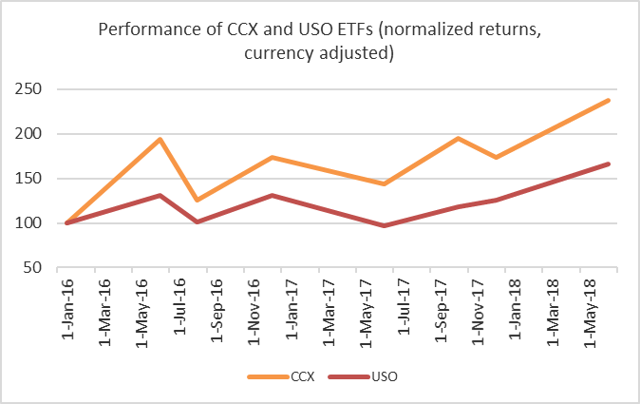 7. If you are an energy investor with a view of oil price, the Canadian crude market should be a strong consideration for a percentage of your portfolio.

Disclosure: The author is a founder and principal at Auspice, the creator of the CCI index and CCX ETF. He may hold position in the CCX ETF.

Auspice Capital
38 Followers
Tim Pickering is Founder, President and CIO of Auspice. Tim leads strategic decision making and the vision for Auspice’s diverse suite of award winning rules-based quantitative investment strategies. Tim believes that in the future, non-correlated alternative investments will be a core holding in all portfolios, regardless of investor size or sophistication. Alternatives will no longer be viewed as risky, but as conservative and prudent, given the measurable value to investment portfolios. He is passionate about creating innovative investment strategies and products that the market needs with distribution through reputable partners at a fair price. In 2015, Tim was selected by Alberta Venture Magazine, one of Alberta’s most widely respected business publications, as one of Alberta’s 50 most influential people. In 2017, Tim was named to the University of Calgary Accounting and Finance Advisory Council at the Haskayne School of Business. Prior to forming Auspice, Tim was VP of Trading at Shell (North America). He began his career at TD Securities (Toronto) in their elite trading development program ultimately holding the Senior PM position for the Energy Derivatives portfolio. Outside of Auspice, Tim has been involved in grain farming in Western Canada. Through the founding of Auspice, Tim ties together a career in commodity and financial risk and portfolio management that has spanned institutional experience along with entrepreneurial vision.
Follow

Additional disclosure: I work at a company that runs the CCX ETF.