For traders with a short-term time horizon looking for big moves, we have updated our list of the S&P 1500 stocks trading above $10 that have the largest intraday high-low ranges (based on the average percent spread between the intraday high and low over the last 50 days). The stocks are grouped based on whether they have a rising or falling 50-day moving average (DMA). With the broader market trading sideways for the better part of the last six months, the fact that the list is pretty much evenly divided between stocks in uptrends and stocks in downtrends makes sense.

While we have seen some increased volatility in certain names over the last several trading days, it hasn't been enough to cause much of an uptick in the average daily move of individual stocks. Through Thursday's close, just seven stocks in the S&P 1500 trading above $10 per share have seen average intraday moves of over 5%. The most volatile of these six stocks is Applied Optoelectronics (AAOI), which averages an intraday range of 6%. Unlike many prior months, you may also find that many of the names near the top of both lists are stocks that you may have actually heard of as well.

Finally, of the 50 stocks listed, the only sectors not represented are Consumer Staples, Real Estate, and Utilities. Sectors that are the most heavily represented are Health Care (13), Consumer Discretionary (12) and Energy (10). Somewhat surprisingly, only seven stocks on the list are from the Technology sector. Not much of a showing for the largest sector of the market. 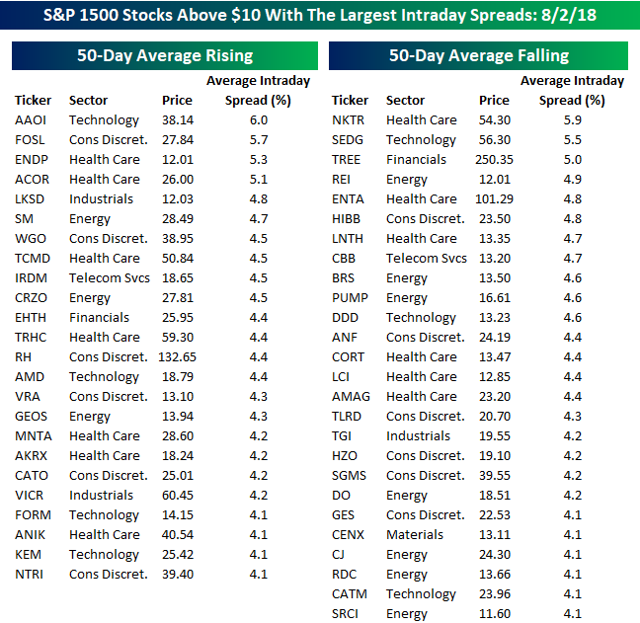 Bespoke Investment Group
44.82K Followers
Bespoke Investment Group provides some of the most original content and intuitive thinking on the Street. Founded by Paul Hickey and Justin Walters, formerly of Birinyi Associates and creators of the acclaimed TickerSense blog, Bespoke offers multiple products that allow anyone, from institutions to the most modest investor, to gain the data and knowledge necessary to make intelligent and profitable investment decisions. Along with running their Think B.I.G. finance blog, Bespoke provides timely investment ideas through its Bespoke Premium (http://bespokepremium.com/) subscription service and also manages money (http://bespokepremium.com/mm) for high net worth individuals. Visit: Bespoke Investment Group (http://bespokeinvest.com/)
Follow
2 Comments