Note: My approach for analyzing CoT data to reveal how different types of traders are positioned in the futures markets is outlined here. If you missed it, give the article a read to see the method behind my analysis. All data and images in this article come from my free website. All raw data comes from the CFTC’s weekly CoT report. Seeking Alpha is the sole source for my weekly recap articles.

This article outlines how traders are positioned and how that positioning has recently changed. I break down the updates by asset class, so let's get started.

The chart below shows my favorite metric for commodity positioning. It takes the net (long-short) position for each trader category, scales it by the market's open interest (total # of outstanding contracts), and normalizes that net position as a percentage of open interest (OI) into a 5-year percentile. The below data is for positioning in WTI crude oil (USO).

If my indicator is at 100%, it means the net position for that trader category (as a % of OI) is higher than it has ever been over the past five years. If it's at 0%, it means their position is the lowest it's ever been over the same time frame. This way, I have a single indicator to compare the positioning between markets of totally different sizes.

I also like to look at net positioning converted to dollar amounts. Here’s that view of spec positioning in WTI. Traders are currently net long $47 billion, a historically high amount. 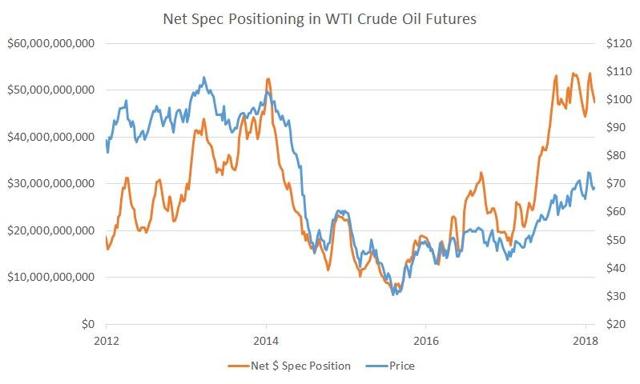 And here’s a view of net positioning as a percentage of open interest for WTI. The first 5-year percentile chart is based off of the below data. It’s interesting to see how the net spec position as a % of OI has steadily drifted higher in WTI futures. This aligns with the fact that commodities have grown more popular as an asset class, since some of this speculative demand trickles down to the futures market. 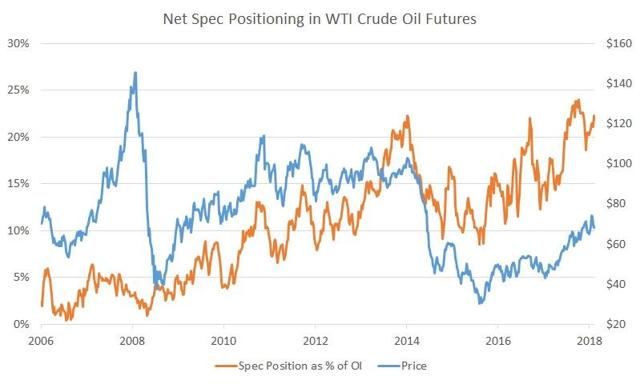 Sugar (SGGB) was one of the most crowded spec short trades in April. Positioning is now less extreme, but on the lower end of its historical range. Traders are currently net short $359 million. 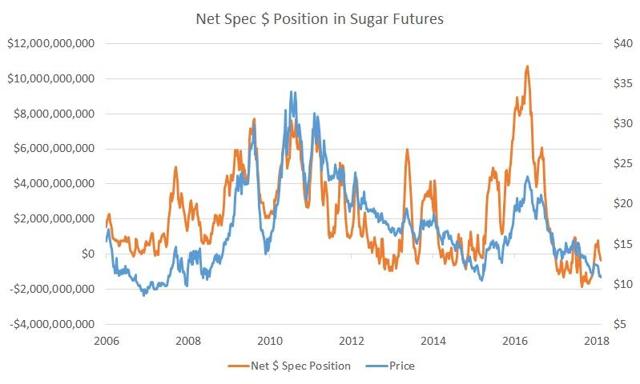 Most of the time producers play a bigger role in the futures markets relative to users. This is because some commodity users can easily pass price increases on to the next company in the supply chain. But commodity producers typically have high fixed costs and are more vulnerable to commodity price fluctuations. So, if producers and users as a group have a historically bullish position on, you can infer this means there's less hedging by producers and more hedging by users.

The same thing is happening in soybeans (SOYB). 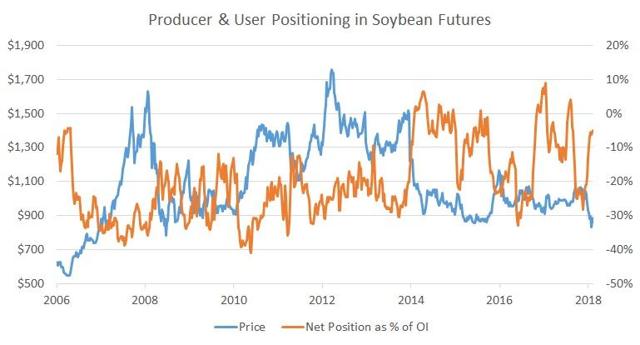 It’s been interesting to watch how positioning has changed in silver (SLV) futures. Traders had extreme pessimistic positioning in May, and then ramped up long exposure just in time for a 5%+ drop.

Here’s a view of net spec silver positioning in $. 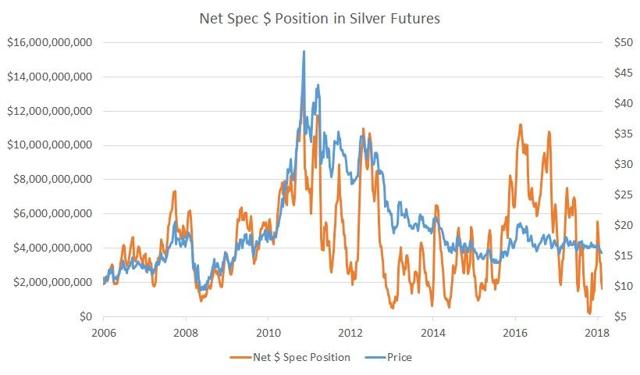 Platinum (PLTM) is the #1 most crowded spec short trade among the commodity markets I track. As I write this article Impala Platinum (a large platinum miner) just announced that they’re cutting 13,000 jobs. The low price of platinum is making business tough for producers.

I’d also like to explain how I think about CoT positioning. A lot of people think you should always go the opposite of extreme speculative positioning, but I disagree. Put yourself in the mind of a hedge fund that’s currently short platinum. The commodity is in a steady downtrend and there’s little reason for them dramatically alter their positioning.

In my opinion, positioning becomes more actionable when price action goes the opposite of what people are prepared for. What if platinum ripped 10% next week? Suddenly, there would be a lot of people caught on one side of the boat who need to reduce risk by liquidating short positions. I personally think crowded positioning + diverging technicals (when price action goes the opposite way of how people are positioned) is a more useful framework than analyzing positioning is isolation. Diverging technicals are (typically) the catalyst that causes speculators to flip out of their crowded positioning. And you tend to get big moves when a bunch of traders run for the exit at the same time. 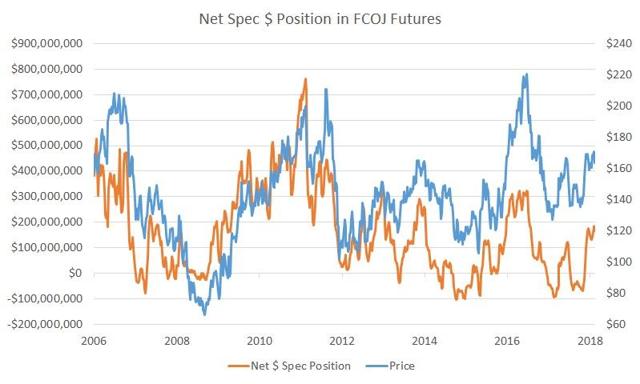 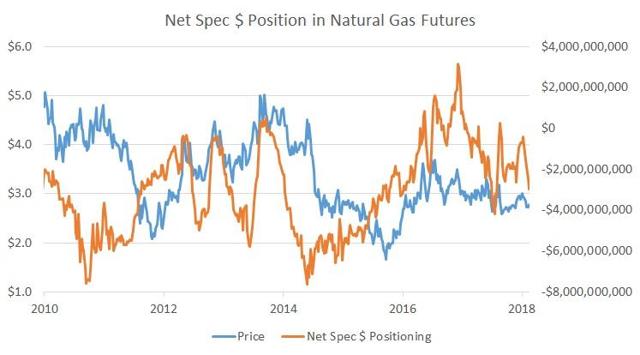 Lumber is a great example of the crowded positioning + diverging price action dynamic. Lumber was one of the most crowded long speculative commodity trades in June and has fallen more than 30% since. In fact, the commodity has traded limit down multiple times over the past few trading sessions.

Lots of traders are watching gold (BAR) and wondering when the precious metal will finally catch a bid. Regarding positioning, traders are net long $6 billion. This is substantially below the net long position of $31 billion this past March. The 12-year low in spec positioning was reached in December 2015 when traders only had $764 million of net long exposure. 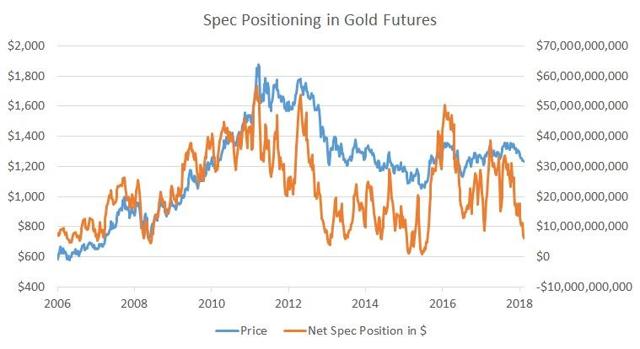 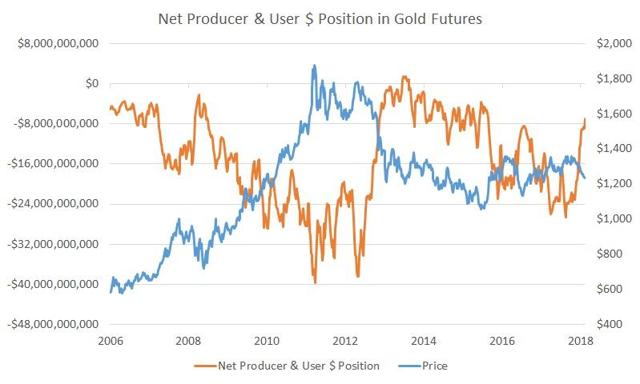 Traders have recently grown less optimistic on corn (CORN). I don’t read much into non-extreme speculative positioning, with extreme being defined as a 5-year percentile greater than 90% or less than 10%. 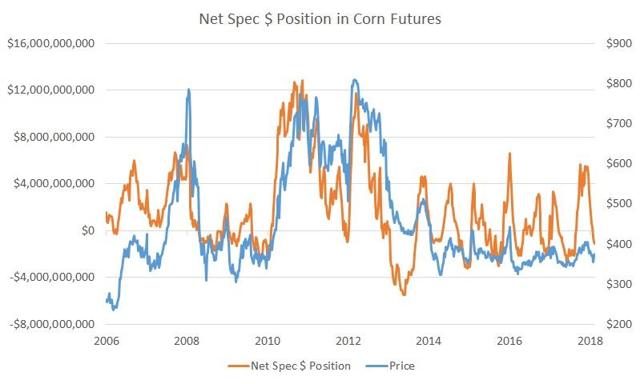 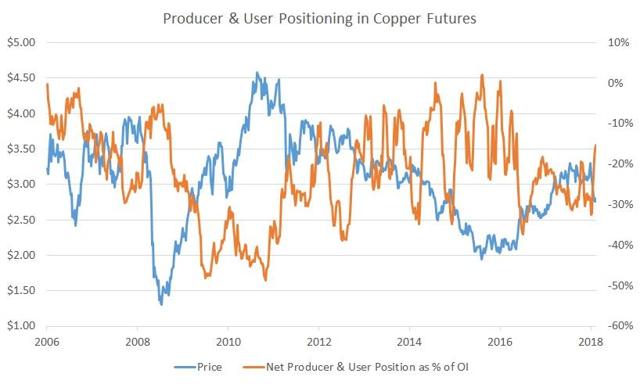 The below chart of copper spec positioning in $ is one of the more interesting charts in this article. Copper traders were extremely bullish last June, when net speculative positioning was net long $5.3 billion. Copper then immediately reversed, putting these new longs under pressure. The commodity has fallen ~15% since the June highs and net spec positioning has dropped to a net long of $778 million. 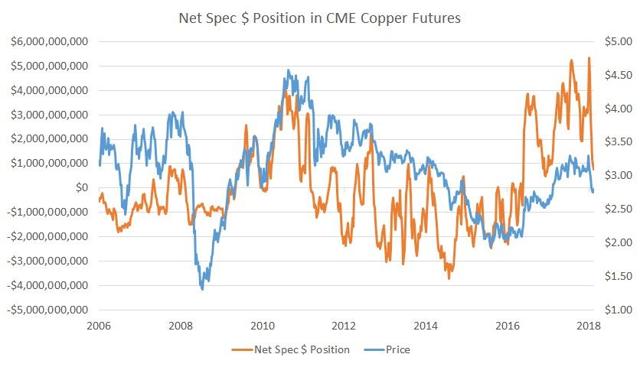 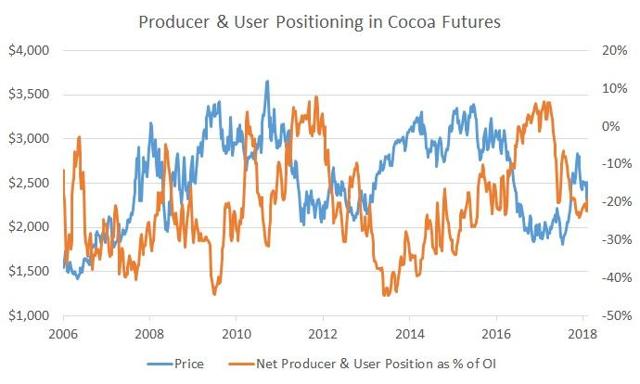 I’ll start the currency section off with, in my opinion, the most interesting currency CoT chart. CHF/USD (FXF) is an extremely crowded short trade, meaning that traders are betting on the Swiss franc to fall in value relative to the U.S. dollar.

Similar positioning can be seen in NZD/USD. I should note that currency CoT data only covers positioning on currency futures and not the much larger spot FX market. The same is true for stock futures and stock CoT data. That being said, I still consider the data representative of overall positioning. Per the below chart, spec short positioning in NZD/USD has rarely been more extreme. 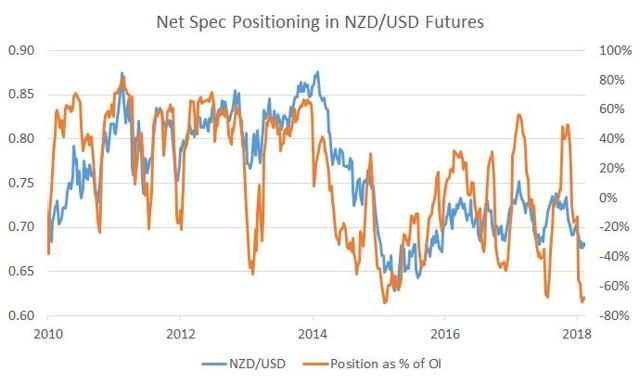 Spec positioning has remained quite net long in MXN/USD. 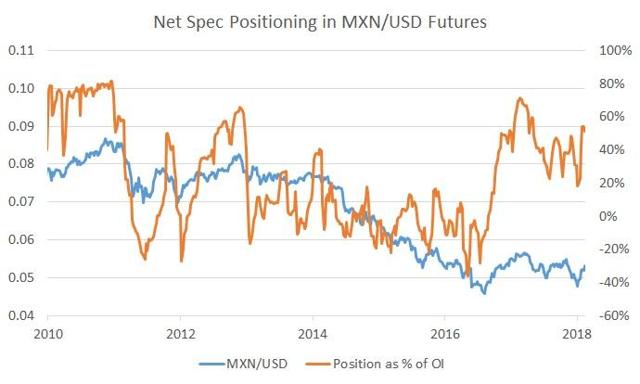 JPY/USD was a consensus spec long in April. Positioning has grown more pessimistic but isn’t yet at a 5-year extreme.

EUR/USD (FXE) spec positioning is still on the higher end but is off the extreme highs of late April when EUR/USD peaked. 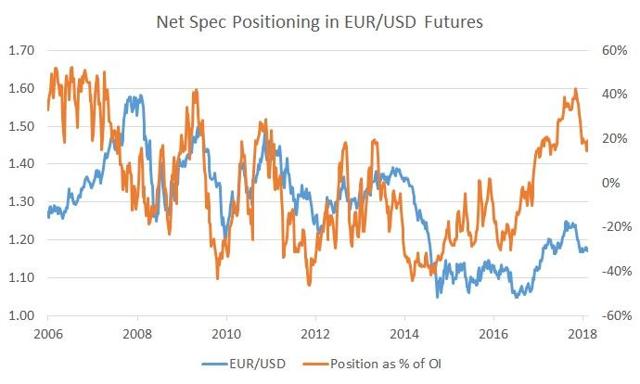 Similar spec positioning can be seen in GBP/USD (FXB). 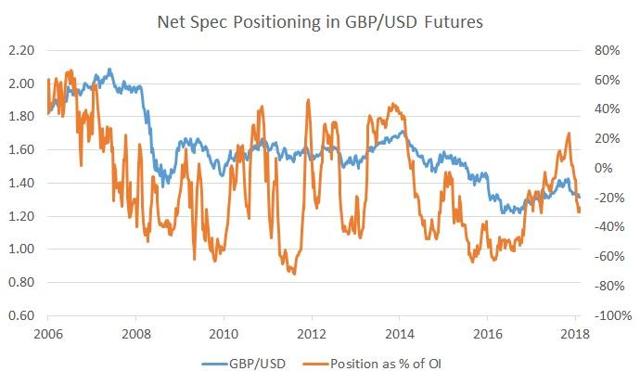 Speculators haven’t been this net short AUD/USD (FXA) since early 2016.

Traders are net short $590 million of VIX (VXX) futures and options. They were net long $1.5 billion in April, a historically extreme amount. There are fewer ways for traders to access the short equity volatility trade since XIV no longer exists and SVXY now targets less short exposure to short-term VIX futures. So I wouldn’t expect to see new lows in net short VIX futures and options spec exposure anytime soon. 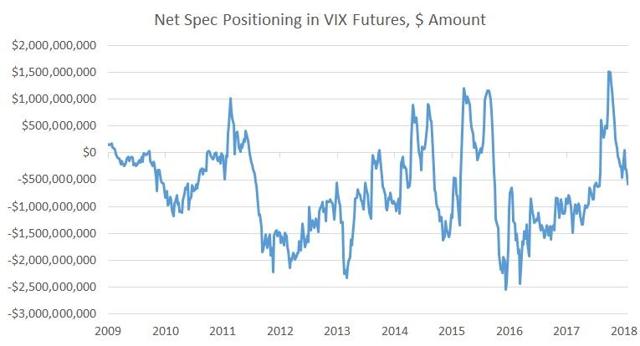 The chart below shows the reduction in VIX futures open interest. 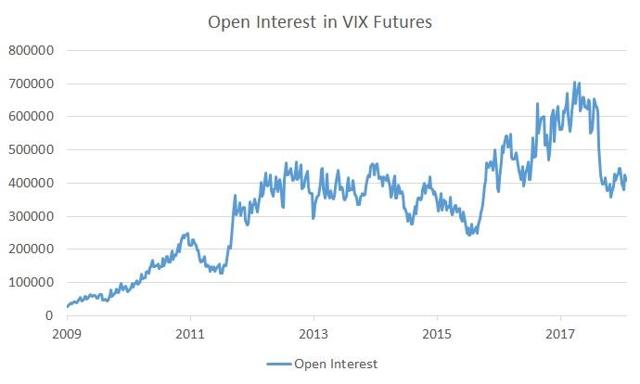 And here’s the 5-year positioning percentiles for VIX futures and options. Spec positioning is right in the middle of its 5-year range.

Traders have substantially reduced their net long exposure to e-mini S&P 500 futures and options. Their net long positioning reached a high of $132 billion in early February, right before the correction. Their current position is net long $55 billion. 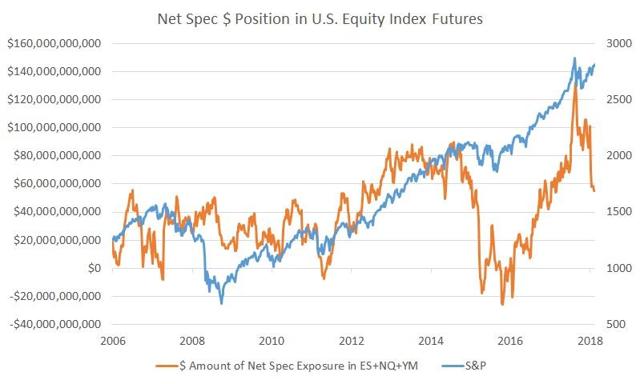 Take a look at S&P 500 (SPY) price action and positioning in the summer of 2015. The 5-year positioning percentile topped out in January, fell into the summer months, and then the S&P quickly fell in August. I point this out to show that extreme price moves can happen with fairly mundane positioning.

Traders have increased their long exposure to the yen-denominated Nikkei 225 (EWJ) contract. 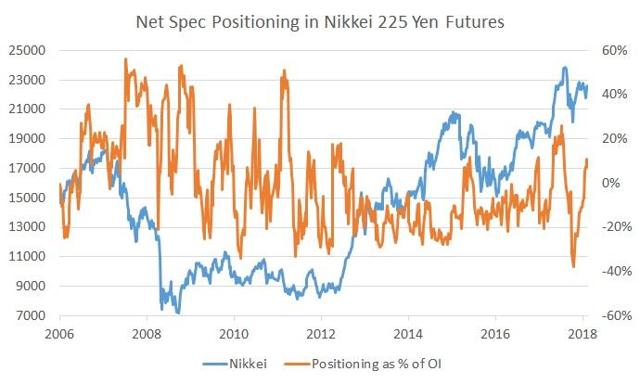 Positioning in e-mini Nasdaq 100 (QQQ) futures has confused me for months. Traders have remained stubbornly pessimistic (relative to the last five years of positioning) despite a very strong Nasdaq.

Spec positioning in mini Dow (DIA) futures is in the middle of its historical range.

I should note that while NZD/USD and CHF/USD are definitely crowded shorts, none of the long trades have 5-year net positioning percentiles greater than 90%, which I typically define as a threshold for extreme long positioning.

So, what are the main takeaways from CoT data?

Follow me on Seeking Alpha to stay up to date on positioning in the futures markets. If you have any questions about CoT data, don't hesitate to ask me in the comments below!

Additional disclosure: The author does not make any representations or warranties as to the accuracy, timeliness, suitability, completeness, or relevance of any information prepared by any unaffiliated third party, whether linked in this article or incorporated within. GraniteShares sponsors the free Commodity Seasonality website but in no way paid for this article. This article is provided for guidance and information purposes only. Investments involve risk and are not guaranteed. This article is not intended to provide investment, tax, or legal advice. All risks, losses and costs associated with investing, including total loss of principal, are your responsibility.