The US dollar fell on Friday after the U.S. non-farm payrolls (NFP) came in below expectations with only a gain of 157,000, but otherwise the unemployment rate dropped to 3.9 percent and wage growth remained unchanged at 0.3 percent. The greenback is still higher against most majors on a weekly basis. The past five trading days featured central banks and influential economic indicators, but the guiding factor remains the trade tensions between China and the United States. On Friday, China announced it's preparing new tariffs on $60 billion US goods as retaliation on the ongoing trade spat. The week that kicks off on August 6 will be more subdued from the economic calendar with the central banks of Australia and New Zealand publishing their official rates. The UK's gross domestic product, Canadian jobs data and US inflation will wrap up the week on Friday, August 10.

The EUR/USD lost 0.61 percent in the last five days. The single currency is trading at 1.1582 after the EUR rose 0.10 percent on Friday but is far from recouping the gains of the USD during the week. The euro rose on a tight rangebound session despite overcoming weak retail sales and was helped by the lower-than-expected jobs report. The currency pair was mostly guided by geopolitics and the U.S. Federal Reserve meeting on Wednesday. Trade tensions have escalated on the US-China front with the US central bank staying put on rates, but giving an optimistic view on the economy. 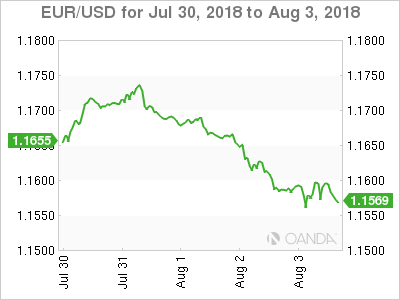 The US central bank is expected to continue with its plans to lift interest rates two more times in 2018. The jobs report brought fewer jobs than expected but still managed to add enough jobs to bring the unemployment rate down to 3.9 percent. There are concerns that the employment numbers will take a hit as trade war decisions trickle down, but for now the outlook for American jobs is solid.

Inflation pressures remains low as despite a lower unemployment and high participation rate wages have not caught up to other costs. Labour shortages have not been widespread enough to trigger an above inflation rise in pay.

The positive employment data and the impressive growth of the economy in the second quarter validate the Fed's decision to raise rates twice so far in 2018 and to continue on the path for two more rate hikes. The CME FedWatch tool shows a 93.6 percent of a chance of a hike in September 26.

The week of August 6 to August 10 will not bring the same economic calendar fireworks compared to the first week of the month. The highlights will be the Reserve Bank of New Zealand (RBNZ) and the Reserve Bank of Australia (RBA) with rate announcements that will likely end up with no change leaving investors to look for words from central bankers and monetary policy language for guidance.

The consumer price index on Friday will shed more light on inflation in America.

The GBP/USD fell 0.79 percent during the week. Cable is trading at 1.3004 with the pound rising slightly on Friday. The Bank of England (BoE) hiked its benchmark rate on Super Thursday, but it was the cautionary words of BoE Governor Mark Carney that ultimately took the currency lower. The actions of the central bank were hawkish, by delivering the second rate hikes since the crisis, but Brexit looms over the monetary policy decision as hard Brexit scenarios have increased in probability. 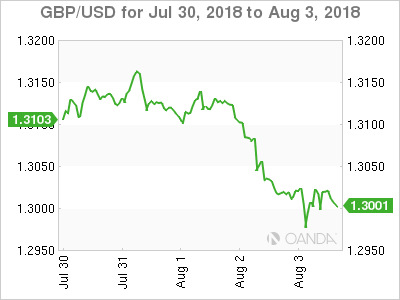 The decision of the Bank of England (BoE) was unanimous, but given the fragile state of Prime Minister May's leadership as she heads into the final 8 months of Brexit negotiations, it could end up being the only pro-active decision by the central bank in 2018 as it heads into reactive territory.

The USD/CAD lost 0.58 percent during the week. The currency pair is trading at 1.2983 after strong Canadian trade data added more arguments for a Bank of Canada (BoC) rate hike. Canada's deficit shrunk to $626 million in June. The monthly GDP numbers released on Tuesday by beating estimates with a 0.5 percent gain. 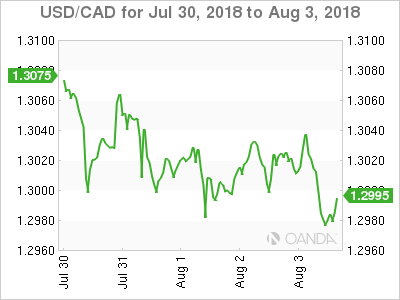 The Bank of Canada (BoC) lifted interest rates by 25 basis points on July 11, and with a strong GDP report and a narrower trade deficit, the probability of a follow up in 2018 has risen. Bank of Nova Scotia is forecasting 2 more rate hikes despite the uncertain outcome on NAFTA. The BoC will try to keep the gap between the Fed funds rate and the Canadian rate as much as the economy will allow. The U.S. Federal Reserve is expected to hike in September and again in December to deliver the promised four interest rate hikes in its path to normalization.

The USD/MXN depreciated on a weekly basis and is trading at 18.5574 on Friday afternoon. The currency pair had a volatile week trading in a tight range. The highest point came as trade fears triggered a flight to safety in which investors bought dollars. The talks on Thursday and Friday between the US and Mexican negotiators are keeping the NAFTA hope alive, and with the soft employment numbers in the US, MXN appreciated. 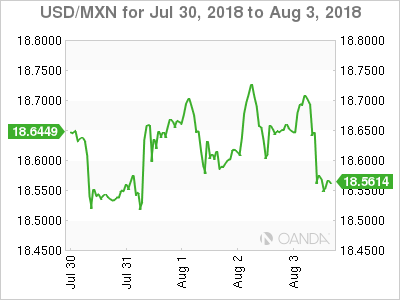 NAFTA negotiations have advanced in recent weeks as the newly elected Mexican president has been optimistic a quick deal can be reached. Mexican Trade teams are in Washington to talk with the US Trade representative, but the US did not extend an invitation to Canada to join the meetings.

The US team is sticking to the sunset cause and the auto content, but there is more willingness to negotiate in bilateral terms, although Mexico has made it clear that it won't negotiate without Canada being present.

For a complete list of scheduled events in the forex market visit the MarketPulse Economic Calendar.