Today's revisions resulted in 59,000 more jobs than had been previously reported for May and June and resulted in average three months job creation at 224,000 jobs and six months average jobs creation of 221,000. Both are the highest three- and six-month averages for a July since 2015.

The unemployment rate was 3.9 percent, down one-tenth of a percentage point from June, but also down 0.4 percentage points from the same period last year. The labor participation rate remained steady, month-to-month, to 62.9 percent in July, both month-to-month and from July 2017. The U-6 Unemployment, at 7.5 percent, dropped 30 bps from June, and down 100 bps from July 2017. It is the lowest U-6 number since May, 2001.July job gainers tended more toward middle range wage occupations like professional services, manufacturing, and construction, but gains also came in lower wage occupations, like leisure and hospitality. Retail showed modest gains. New jobs in Construction continued to gain, but at a lower rate, which is consistent with the slower rate of home construction discussed below. Jobs creation in the Wholesale Trade increased while Transportation and Warehousing sectors declined. Nominal average weekly wages actually decreased slightly from June,

Overall, this was a largely disappointing jobs report. The 3 month and 6 month average jobs creation don’t presage strong growth and we have other concerns for the economy.

We anticipate 2018Q3 to print in the range from 2.7 to 3.2 percent, assuming tensions in the Straits of Hormuz remain stable, but we anticipate a downward revision of that estimate as more data comes to view in the coming weeks. Let's look at our exclusive jobs creation by average weekly wages for the June jobs report: 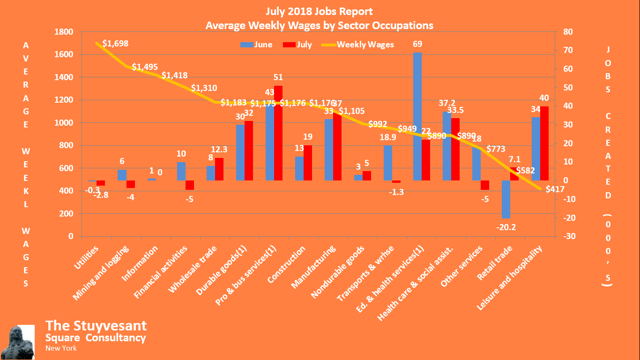 We're happy to see the six month jobs creation remain slightly above 200,000, at 221,000 new jobs, for the third consecutive month, including today's revision.

We're also heartened to see fuel prices falling. But gasoline prices remain, on average, 21 percent higher than last year. We hope that they have plateaued with oil prices; but not if they signal weakness in the broader economy.

We have considerable concern about the exercises the Iranian Navy has started in the Persian Gulf and statements by Iran’s leadership that they would cease all flow off oil through the Straits of Hormuz if Iran could not sell oil. U.S. sanctions against regime are scheduled to begin on Monday. At the moment, the U.S. Navy has only an amphibious helicopter carrier in the Middle Eastern theatre, so if Iran were to escalate and blockade the strait, as they have threatened, we would have to dislodge them from the blockade instead of preventing them from initiating it. The former is orders of magnitude tougher than the latter and far more likely to result in kinetic warfare and casualties. Transportation data increased to a record high. We're also heartened that people are taking home more cash from the tax cut, so that debt service will account for a lesser percentage of disposable income and are anxious to see data supporting that supposition. We note these other developments since the June jobs report:

We continue to hope that the pace of Federal Reserve interest rate increases will be constrained, though that seems unlikely given the 2018 Q2 GDP report. We think it is a mistake to move rates higher and may trigger a recession in early 2019 unless other data substantially improves.

While inflation for personal consumption expenditures, less food and energy, or "Real PCE", has hit the Fed's target of 2 percent, the rate is volatile. We continue to believe that moves toward normalization should take place more slowly and only after growth had become decidedly more robust, as we have discussed previously. We have long held the view that trimmed mean PCE, produced by the Dallas Fed, is a better measure of inflation in the day-to-day costs of most Americans, so we believe the Fed has room to run on inflation. The 2 percent rate the Fed adopted last month, and anticipated two additional rate increases, will stifle GDP growth.

Largely tied to that, we continue to be troubled by the yield curve, as we have discussed repeatedly. The 3 Month/10 year curve that we most closely monitor has been volatile, but moving upward. We believe it is yet another sign that Fed rate hikes are premature and are outpacing the economy's growth because the Fed mostly affects short-term rates, principally the 3 month. (And even that rate is dropping, apparently organically, the last few days as short-term money seeks security.)

Nevertheless, the 10 year yield seems to have stabilized, so investors are showing an increased appetite for risk over last month, as signaled by moving, somewhat, toward equities from Treasuries; the opposite of last month.

We're troubled by the sharp decline in Eurozone and UK GDP, as well as the strengthening of the dollar relative to most currencies. While we dogmatically prefer a strong dollar from a high demand for US goods and services, we're inclined to think this surge is mostly attributable to the Fed's interest rate hikes more than demand for U.S. goods and services. We remain unperturbed by the tit-for-tat trade dispute with China and by the Trump tariffs. We support the president's more diligent management of trade to defend against cheating. We prefer the president engage American allies to step up to join a "coalition of the willing" to challenge China's decades old unfair trade practices and thefts of intellectual property.

While CEOs seem concerned about margins if China manufacturing sites are lost in a trade war, we note that contract producers in most businesses are available in other locations and at lower wages than China and that thefts of intellectual property present a longer-term threat to US businesses. We are bullish on India, and believe it is a much more promising venue for low-wage manufacturing investment over the long-term; however, again, the Fed aggressive rate increases risk a “sudden stop.” In our view, China can't afford a restless - or even a rebellious - populace being unemployed. Its leaders need exports to the U.S. and Europe more than the West needs access to China’s markets. Losing American sales in Chinese markets might hurt American and European companies bottom line and anger American farmers; losing Chinese jobs to American tariffs might collapse China’s government. We’re circumspect about the rate of GDP growth reflected by the 4.1 percent reported for 2018Q2. We believe it arose largely from stacking up GDP from prior and later quarters, as discussed here. We’re hopeful that today’s jobs number will circumscribe the Fed’s reported pace of rate increases. We estimate 2018Q3 GDP will print at 2.5 to 3.0. In equities, we think these sectors will perform as follows:

Additional disclosure: The foregoing is only the author's opinion about a company and its operations, market, and management. or general market and economic conditions. It is not intended as investment advice, and you should not use it for that purpose. You should consult your own personal financial adviser before undertaking any changes to your investment portfolio.