Long US dollar is becoming an increasingly crowded trade.

During the start of major moves it's not unusual to see big moves in positioning, so our base case of a stronger USD is maintained.

This week we're looking at futures positioning in the US dollar index, whereby we find a market that is becoming increasingly crowded on the long side. This is important because if you look across some of the major global markets (especially commodities and emerging markets), you find a material move in the US dollar could drive some key risks and opportunities.

The chart comes from a report which looks at the weight of risks in the USDCNY and how it ties into the US dollar outlook for H2.

As noted, the chart shows speculative futures positioning for the US dollar index, and after a lurch to the short side around the turn of the year, traders have now moved materially net long. 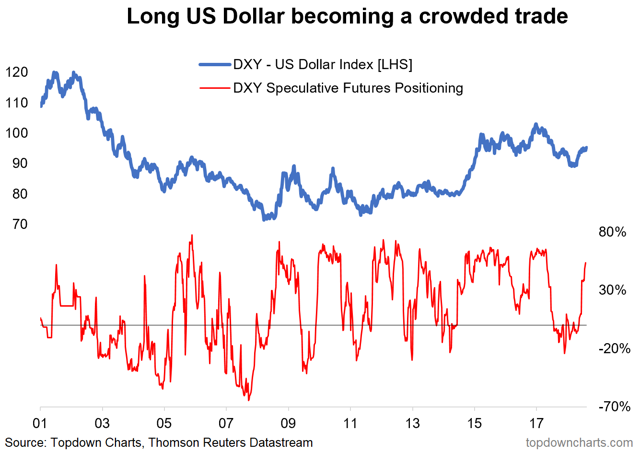 The speculative futures positioning indicator shows the net long (long minus short) positioning by non-commercial speculators (from the CFTC commitment of traders report) standardized against open interest. This is shown against the US Dollar Index.

Basically, positioning can be viewed as a sentiment indicator - telling us key information about momentum as well as informing us of risks when positioning becomes stretched/extreme. It's fair to say positioning was stretched relatively speaking when the market was net short around the turn of the year, but at this point, it's not really fully stretched to the long side, though it is increasingly becoming a crowded trade.

What I think is important to point out is that the market was stretched to the long side in late 2014 just as the major move in the US Dollar Index got underway, where it rallied from 80 to 100. With key macro variables in play such as Fed Quantitative Tightening, I think it's wrong to assume that because long USD is becoming crowded, it can't go up. Indeed, that's precisely our base case for H2 this year (that USD strengthens further).

So while long US dollar is becoming an increasingly crowded trade, be careful of standing in front of this freight train as it's just getting out of the station.

Follow Topdown Charts and get email alerts
+
Add a comment
Disagree with this article? Submit your own.
To report a factual error in this article, click here.
Your feedback matters to us!