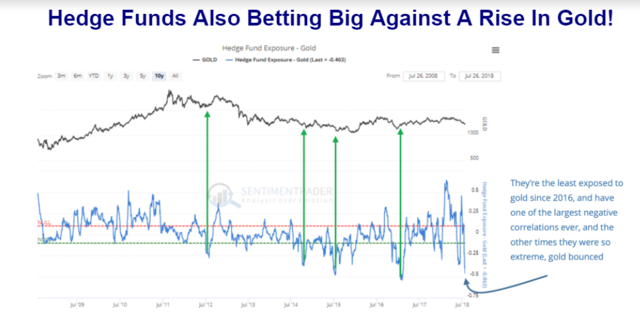 Looking at the July 26 commitment of traders report, it appears that hedge funds have bet heavily against a rise in the price of gold.

"Gold and silver hedge funds have the least exposed position to the gold market since 2016," MontesDeOca said. "We are seeing one of the largest negative correlations ever. All the other times that they were this extreme, the gold market bounced substantially."

Looking at the 24-year chart, the commercials for gold and silver have reduced their short positions substantially. It appears that the central bank short strategy risk has been transferred to the spec hedge funds in the gold and silver markets. 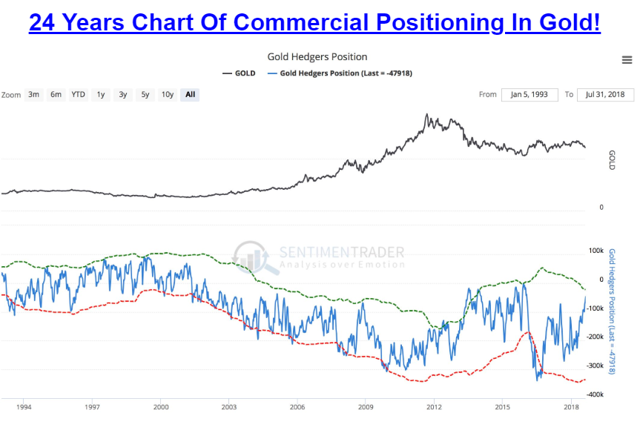 MontesDeOca said, "This is an unusual combination that indicates the possibility that we could see a rather rapid move and an increase in the volatility of the gold and silver markets based on the possibility that the hedge funds could be short squeezed out of their positions by central bank buying the other side of the market." 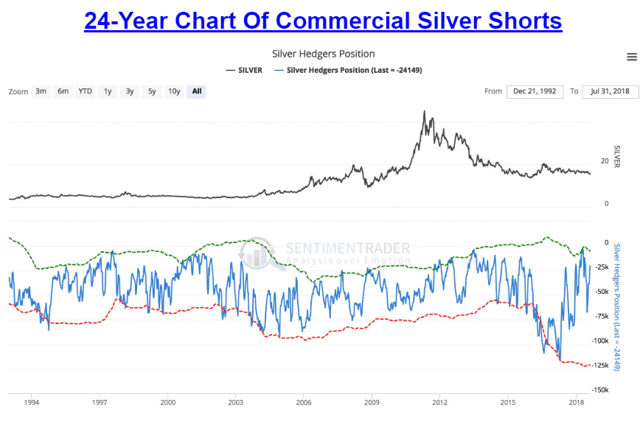 In our discussion, MontesDeOca stressed, and I agree, that these are elements for an explosive market if the hedge funds have to short cover their positions in the gold and silver markets. Then, if we get additional support with central back buying, followed by speculative buying, it could make this a very interesting market for the rest of the year.

I wrote an article on Seeking Alpha not long ago, on July 23, called "Can Silver Gain 15% by September 2008?" When I look at the numbers now and at the commitment of traders report, I think we are beginning to see a strong correlation that increases the probability of such a move tremendously.

Let's look at the supply and demand factors for gold and silver coming into next week so we can know what to expect next week. These numbers are to be followed on a weekly basis. Anytime the markets reach these numbers during the week, you can activate these signals as directed by the VC PMI automated algorithm. 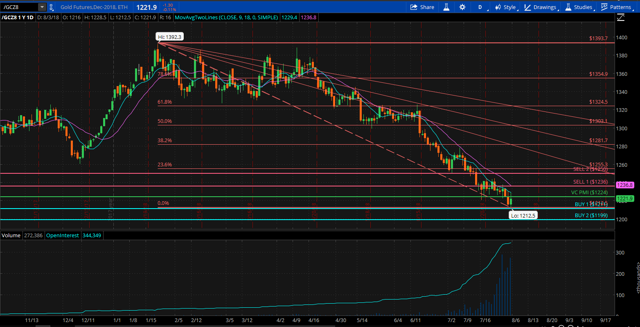 "We recommend, based on the VC PMI," MontesDeOca said, "that if you have any positions coming into this week that you purchased at the low levels of $1215 or $1220, you should start exiting them since you are at a good profit level."

On the other hand, if we continue to follow the bearish sentiment next week, the weekly buy 1 (B1) level is $1211, which is the point at which the VC PMI algorithm recommends to cover shorts and buy into the market if it is activated this week. We recommend buying in all the way down to the buy 2 (B2) level of $1199. These are the levels of demand that have been identified in blue on the charts the Equity Management Academy provides to its subscribers. The red levels are supply levels.

"When we incorporate Fibonacci fan lines over the work we do at the EMA," MontesDeOca explained, "using these data points, the first level of Fibonacci fan line resistance is around the $1280 level, which corresponds to the 38.2% retracement of $1282. This is a very important level to keep in mind. If the market price reaches this level, it will tell us where it wants to go once that is accomplished."

If the gold market closes above this level, it activates the upper end of the Fibonacci trend line resistance which is $1301, corresponding to a 50% retracement of $1303.

MontesDeOca said, "This is another cluster of resistance or target objectives in the pattern/structure from the high to the low made this year."

The third Fibonacci fan line resistance is at $1343.40, which matches almost perfectly the 61.8% golden ratio Fibonacci retracement of $1324.50, which is our major target in this structure for this move for the next 45 to 90 days.

Silver: Transition to a Bull Market 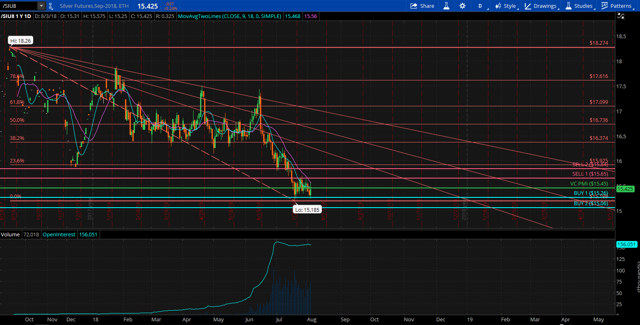 "Anytime over the next week that we accomplish these levels, if you're long from the B1 of $15.26 or the low $15.00s, this would be the area to lock in some profits as the market moves into a bullish trend," MontesDeOca advised.

"These are levels," MontesDeOca said, "based on the high and the low this year, which are anticipated to unfold for the next 3 or 6 to 9 months."

MontesDeOca explained, "These are clusters that are targets or pivot points for the silver market. We use them to identify the specific price levels of extremes of the relative implied volatility that we expect as gold and silver transition into a bull market."

Disclaimer: The information in the Market Commentaries was obtained from sources believed to be reliable, but we do not guarantee its accuracy. Neither the information nor any opinion expressed herein constitutes a solicitation of the purchase or sale of any futures or options contracts. It is for educational purposes only.