Shares of Intercontinental Exchange Inc. (NYSE:ICE) are down 5.50% since peaking on June 26, 2018, and in my opinion, the shares of this electronic market-exchange for commodities, foreign currencies, and interest rate products are a value buy right now. The company has a solid history of generating strong earnings growth, and the future growth ratios point to accelerated growth over the next twelve months. I lay out my bullish argument for the company below by reviewing some pertinent fundamental and technical aspects of the stock.

Over the last few months, I have developed a new approach for my fundamental analysis of stocks: the Momentum Growth Quotient (MGQ). The MGQ is the key metric that I use to gauge the financial health of a company and its potential future growth prospects. The MGQ is calculated using the following company financial data:

The goal is to generate a single number, which summarizes the relative fundamental strength and future growth prospects for a company compared to an index. For the index, I use the S&P 100 - this index provides a wide swath of companies from different industries representative of the broad US economy. I update the Momentum Growth Quotient for each company in the S&P 100 every month and then use the average quotient as my baseline to compare the relative financial strength of individual companies.

The current MGQ for ICE is 15.56, which implies a 55.00% higher growth rate compared to the S&P 100. This tells us that ICE has strong future growth potential and is a good candidate for a long position.

Let's dig a little deeper into the financial data to get a better feel of how the company has performed on certain fundamental metrics and what these numbers imply for future growth.

Knowing how a company has performed in the past is important in order to evaluate management's past record in running the business. But more important to us is how profitable the company will be in the future because we are investing going forward, not backwards. And it's the forward-looking metrics that should really get you excited about ICE.

I like to use two measuring sticks to gauge the future growth potential for companies: Forward P/E and forward rate of return.

There are several ways to interpret a company's Price-to-Earnings Ratio (P/E). One approach is to look for companies that have a lower P/E compared to other companies in similar sectors - the rationale being that the lower the P/E, the more a company is being undervalued by the market, hence, the more value you are buying for every dollar invested. This makes a low P/E stock a good value, but there is also the other side of the coin - it can also indicate that investors aren't very confident about the company's prospects.

I prefer to use Forward P/E (current stock's price over its "expected" earnings per share) to gauge a company's expected future earning power. A high Forward P/E ratio means that investors are anticipating higher growth in the future and are willing to pay more for future earnings - momentum investing is all about following the trend (perceived or real).

The risk inherent in the forward rate of return is that the calculation is reliable only if the company can grow at the same rate in the future as it did in the past. If the growth rate falters, the projected returns will not materialize. But we are willing to accept this risk as part of the difficult process of forecasting earnings and growth momentum.

As per my ChartMasterPro Daily Trade Model, the momentum trend for ICE would turn bullish with a break above the $73.50 level. This would signal a bullish breakout from consolidation zone between $72.50 and $73.50 on the daily charts. From here, I see the shares climbing to the $80.00 level over the next three months.

I often like to anticipate a technical breakout, so today I will buy the ICE 21SEP18 70 Call Options, which will provide approximately 15x leverage on my long trade. My stop-loss exit signal for the trade will be a daily close below $71.50. When trading options with leverage, a stop-loss is absolutely imperative in order to avoid oversized losses and wipe-outs.

For investors in the shares, I recommend that you hold for 3 months or $80.00, whichever comes first. For longer-term investors, I believe ICE is a solid addition to any growth portfolio over the next 12 months. 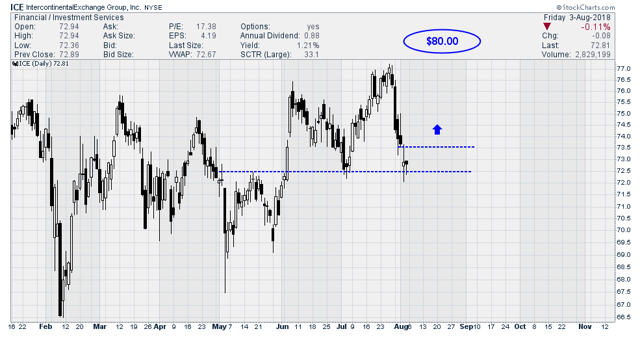 On August 2, ICE released its numbers for Q2 2018, and they were good: On a YOY basis revenue was up 5.8%, net income was up 10%, EPS was up 18%, and free cash flow was up 16.7%. But the shares dropped on the news; as often is the case, the reason for the drop was guidance that pointed to the lower end of the range for Q3 and Q4. But this lack of excitement from the market creates what I believe is a good entry point for investors.

As CFO Scott Anthony Hill pointed out in the Q2 earnings call, the company booked record net revenues of $1.25 billion for the quarter, and revenues for the their Trading and Clearing division also came in at a record level of $609 million.

And the company continues to hold a dominant role in the listings markets:

The NYSE raised nearly $9 billion through 20 IPOs in the second quarter. Through the first half of the year, the NYSE remained the global leader in capital raised through IPOs with over $19 billion. We are now home to 21 of the last 22 IPOs that have raised over $1 billion.

But as they say, the past is the past. We invest in a company for potential future earnings growth, not past results. Let's take a look at a few strategic initiatives that the company discussed in the earnings call that have the potential to add to earnings growth going forward.

Since 2000, this company has had a history of making strategic acquisitions and introducing new technologies to broaden and enhance its products offering. For a history of the company's innovations, see this comprehensive company fact sheet. And management is not sitting on its laurels, but always looking for new innovations to better serve its clients and increase revenue.

As company President Benjamin Jackson stated in the earnings call regarding the fixed income trading markets:

The phone is no longer an option for the high volume, smaller trade size, a result of fixed income market structure changes that have fragmented inventory.

ICE offers greater trade efficiency for fixed income products via its BondPoint and TMC platforms. Efficiency means lowered costs for institutional and smaller traders, and the ongoing effort to automate fixed income trading will be a growth opportunity for ICE. In the first half of 2018, volume for its BondPoint platform was up 30%.

An Alternative to WTI Cushing

The benchmark for US crude prices is currently the legacy benchmark at Cushing, Oklahoma. But as CEO Jeffrey Sprecher pointed out in the earnings call:

The legacy WTI benchmark at Cushing, Oklahoma is an important market for U.S. crude oil in the Midcontinent, but it is a landlocked benchmark with growing quality concerns. This is evidenced by the price divergence between Brent crude and WTI Cushing crude which has recently widened to as much as $11.

So ICE is planning to offer an alternative for the pricing of US crude oil, which it believes will present a more accurate market price for the commodity. Pending a regulatory review in September, the company will launch the Permian WTI contract, which will reflect the price of crude oil that funnels through Houston, and will serve as a benchmark for exportable US crude oil.

On August 3, the company announced that it will launch a bitcoin futures product called Bakkit in November. Although not the first bitcoins futures market, what makes the ICE offering unique is that it will offer one-day physical settlement of bitcoin, rather than cash settlement. The company is positioning itself to become a leading global provider for cryptocurrency trading, storing, and spending.

The above three innovative initiatives show that management is actively engaged in finding new ways to grow market share and grow earnings. Combined with my high MGQ and positive forward looking ratios, I feel extremely confident in going long this company at the current share price.

When I go long a stock, I want to invest in a company that provides superior future growth potential, but I also want to time the entry into any position to try to maximize my return.

In my opinion, ICE is an attractive buy at these levels from both a fundamental and technical perspective.

ChartMasterPro
2.8K Followers
Author of The Options Trader
Options trading for investors who want to add leverage to their portfolio

ChartMasterPro is a trading service which focuses both on the fundamental and technical analysis of stocks and equity markets. I use a proprietary trading model to trade Call and Put Options on US equities. I've been trading options for 15 years and have made all the trading mistakes that could possibly be made, but as Winston Churchill once said: "Success is the ability to go from one failure to another with no loss of enthusiasm." And by the way, the name is John, John DiCecco. I'm excited to announce that I now offer a MarketPlace service in partnership with SeekingAlpha called The Options Trader - if you like trading options, check it out.

Disclosure: I am/we are long ICE. I wrote this article myself, and it expresses my own opinions. I am not receiving compensation for it (other than from Seeking Alpha). I have no business relationship with any company whose stock is mentioned in this article.

Additional disclosure: Note I allocate 3% of my portfolio to each option trade. To review the performance of my past trades please see my Blog Posts.