In 2008, platinum reached its all-time peak at $2308.80 per ounce. Palladium hit its high at $1133 in January 2013. Both platinum and palladium futures trade on the NYMEX division of the CME in the futures market. Rhodium only trades in the physical market, and its record high came in 2008 at just over the $10,000 per ounce level making the PGM the precious metal that traded at the highest price in modern history.

Platinum falls to a decade low

The most recent price action in the platinum market has been a continuation of the bearish trend that began at the high in 2008.

As the monthly chart highlights, the price of platinum plunged from its record high of $2308.80 in March 2008 to a low of $761.80 in October of the same year. The price carnage that took platinum 67% lower in just seven months has likely caused many investors and market participants to think twice before dipping a toe into the platinum market on the long side over the past decade.

After recovering back to a high of $1918.50 in August 2011, the price of platinum has made lower highs and lower lows. In January 2016 it fell to lows of $812.20 per ounce, and after another attempt at a recovery that took the price to just under the $1200 level in August 2016, it has been all downhill for the price of the precious metal. During July 2018, platinum slipped to a low of $796.90 which was the lowest price since December 2008. October platinum futures on NYMEX were trading at just over the $824 per ounce level on Monday, August 6 as the bounce from July's lower low has been anemic.

While platinum fell steadily in a bearish price pattern since August 2016, the price of palladium went the other way.

As the quarterly chart illustrates, palladium moved from $451.50 in January 2016 to a high of $1133 per ounce during the first month of this year. The price has since corrected lower, but at the $900 level on August 6, the price was still close to double the level in early 2016. Meanwhile, rhodium appears to have taken the bullish baton from the palladium market as that has been the PGM bull so far in 2018. 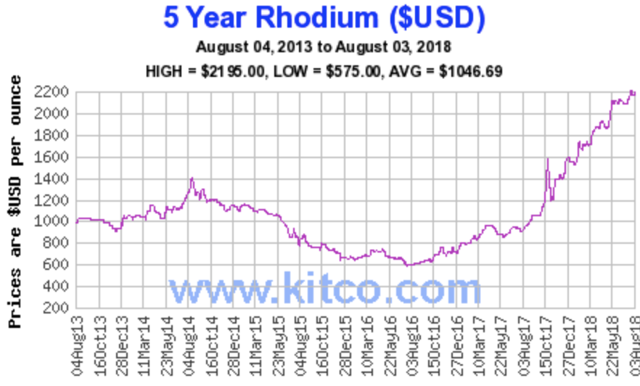 Rhodium is a byproduct of platinum mining that has applications in the chemical and automobile industries in catalytic converters.

With no primary mines for rhodium, supplies are falling as Impala Platinum Holdings, and Lonmin Mining shut unprofitable shafts because of lower platinum prices. The rhodium market suffers from limited liquidity and is dominated by a small number of participants. Additionally, there are limited above ground stocks to meet demand. Johnson Matthey PLC expects that last year's small rhodium deficit will move to a surplus of 68,000 ounces in 2018. In 2019 and beyond, improving economic conditions around the world could cause demand to increase and push the fundamentals back into a deficit.

The price of rhodium has held up better than platinum because both rhodium and palladium are primarily used in gasoline-powered automobiles while platinum has traditionally been required for diesel-powered automobile engines. However, a slowdown in Chinese economic growth could thwart the upward momentum in the rhodium price if demand from Asia retreats.

Meanwhile, the price action over the past year could be a sign that a dominant market player is accumulating rhodium, and with an all-time high at above $10,000 per ounce, there is plenty of upside room in the rhodium market.

How to invest in rhodium

Rhodium is only available in the physical market. Coin dealers offer one and five-ounce rhodium bars. The two refiners that mint the ingots are Baird & Co, and PAMP, the Swiss refiner. Baird& Co recently launched the world's first legal tender coin made of rhodium, the Tuvaluan $100 coin that one ounce of .999 pure rhodium metal. The coins are legal tender in the South Pacific island of Tuvalu, which was a member of the British Commonwealth until 1978. The bars and coins are the only direct route for investment in volatile rhodium market.

A bear market in platinum could continue to boost the price of rhodium as production falls due to mine closures as the price of extracting platinum from the crust of the earth becomes a losing proposition.

Meanwhile, perhaps the most bullish factor in the platinum market these days is the rise in the price of rhodium because of a cutback in platinum products. From 2016 through 2018, the price of palladium soared and reached a new record high. These days, rhodium has more than doubled in value compared to its price last year at this time. However, platinum continues to trade near its lowest price in a decade. It is possible that platinum is at or close to a significant bottom because when production slows, inventories tend to decline and as demand increases at low prices leading to price recovery. Global stockpiles of platinum are nowhere near the levels they are in gold and silver. Platinum demand for investment is much smaller than in gold and silver, and industrial demand on a per ounce produced basis is much higher for platinum. In the platinum market, mine closures in South Africa could be the spark that ignites a long overdue rally in the platinum market. The primary production cost of platinum is very high compared to other precious metals as occurs deep in the crust of the earth making its extraction an expensive proposition.

Platinum is a difficult trade on the long side, but the best opportunities usually are the most frustrating 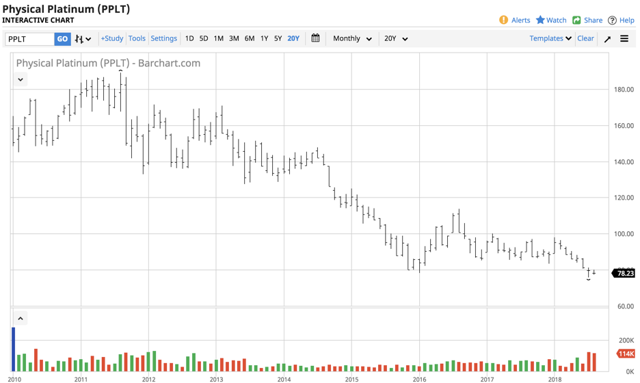 As the chart of the Physical Platinum ETF product PPLT shows, it has traded in a range from $75.85 to $189.20 since 2010. On Monday, August 6 it was trading at just above $78 per share which is close to the lowest level in eight years. With $436.69 million in net assets and an average of 86,380 shares trading each day, PPLT is a liquid product that does an excellent job replicating price action in the platinum futures market. The expense ratio is at 0.60%.

Rhodium has taken the bullish baton from palladium this year, but it may be only a matter of time before platinum finally stages what is a long overdue comeback as production is on the decline and that tends to be the most significant sign of a bottom in any commodity market.